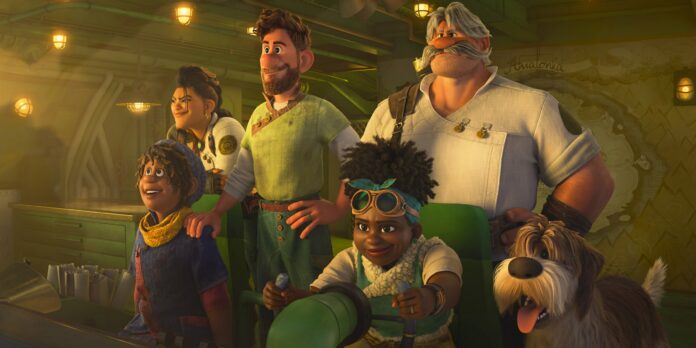 THE STORY – The Clades are a legendary family of explorers whose differences threaten to topple their latest and most crucial mission into uncharted and treacherous territory.

Framed by the pulpy style of classic adventure stories with flipping comic book pages and faded film-strip-style animation, “Strange World” immediately makes it clear what sort of quest Director Don Hall and writer Qui Nguyen (“Raya And The Last Dragon“) want to take the audience on. Not since the back-to-back years of 2001’s “Atlantis” and 2002’s “Treasure Planet” has Disney crafted a throwback, Jules Verne-esque venture this fun and rousing. Unfortunately, the film’s stylized opening sequence needs to adequately mirror the rest of the story, which surprisingly focuses less on an adventure than the profound conversations between fathers and sons. There’s good to be found in “Strange World,” which features stunningly creative and fluid animation, as one would expect from Disney, but not much else to hold onto as its screenplay attempts to do too much and doesn’t form a cohesive whole in the process.

“Strange World” follows three generations of the Clade clan in the land of Avalonia. It’s peaceful, but its people are confined by mountains on all sides. Jaeger Clade (voiced by Dennis Quaid), the legendary explorer and father to Searcher (Jake Gyllenhaal), is determined to find his way over the treacherous mountains. What lies on the other side? He’s driven to learn the answer and has no fear in his pursuit. Searcher, on the other hand, isn’t as fearless. After an accident on an expedition, Jaeger is lost and presumed dead. Searcher renounces any more adventure in his life but is compelled by the discovery of pando, a green plant that gives renewable power to the land. Over the next many years, Avalonia experiences new technological advances, thriving because of pando, and Searcher builds a family on a peaceful farm with his wife (Gabrielle Union), son, and their dog. Searcher’s queer teenage son Ethan (Jaboukie Young-White) is a good kid, though he is embarrassed by his dad and fascinated by the adventurous grandfather he has never met. When the pando their society depends on ceases to function, Searcher is pulled back into a life of adventure into a strange world by Avalonia’s president, Callisto Mal (Lucy Liu), to find the root of the cause or a new source of energy for generations to come.

So often, the criticism of adventure films or big blockbusters is that the filmmakers haven’t spent enough time developing the characters and are only concerned with the plot. The opposite is true with “Strange World.” Director Don Hall and writer Qui Nguyen spend a great deal of time setting up the familial aspect of “Strange World,” which should ground the story in some well-earned emotional beats as we get deeper into the story. However, the adventure itself could be more engaging. When Searcher is tasked with finding a solution to the pando problem in the hostile, fascinating world deep beneath Avalonia, the introduction to the world’s overall design and aesthetic is spellbinding with radiant colors and fantastical creatures. Rather than ensuring the audience is invested in the “why” of the quest, the film spends much more time awkwardly stuffing in familial conflict, especially after Searcher finds the previously presumed dead Jaeger lost in the world beneath Avalonia. Eventually, the effect of being caught up in this strange world and the grand reveal of what it is becomes diminished by the end as the film struggles to balance its many themes, characters, and genres together.

In the last year, two other films from Disney, “Encanto” and “Turning Red,” have tackled themes of parental control and familial trauma. Those are vital and under-discussed themes in family films, but “Strange World” doesn’t add much to the conversation, rather than what feels like an obligated checkbox the storytellers had to complete in order to get the film into theaters. It’s sweet to see three generations of men confronting their emotions and desires, but it feels disconnected from the journey to save Avalonia. The pacing is even more strange than the world itself as the film stops to have extensive, on-the-nose conversations between the men, almost entirely forgetting the plot altogether. While these moments can be touching, there’s no narrative thrust to keep the audience invested, even if the themes are important. Instead, most of these conversations feel forced and awkwardly stuffed into the movie.

The mysterious world itself is beautifully animated. Where most adventure films dive into lush, green forested areas, “Strange World” is full of bright reds, vibrant oranges, and creatures that don’t look like they’re from the earth. Clearly, there’s more than meets the eye here, and in the absence of a traditional Disney villain, the film instead tries to tackle big themes on generational trauma, legacy, acceptance, and even environmentalism with flawed characters who must learn to grow as they battle existential forces and faceless creatures. Even when the story is sagging, the animation is always exciting as the film cranks out a lot of clever ideas in its overall design, mixing sci-fi with adventure. Much of the excitement comes from Splat, a squishy, blue, amoeba-like creature that befriends Ethan. It’s unbearably cute and a perfect sidekick to keep things light and funny. Voice performances are all consistently solid with Dennis Quad providing the most exuberance as the larger than life Jaeger Cade.

With the lively animation and important representation, there’s much to appreciate in “Strange World.” No doubt, younger viewers will likely enjoy the movie quite a bit as the exploration of its sci-fi-influenced world holds a ton of wonder and excitement. However, for a film that models itself on classic epic adventures in the vein of something like “Indiana Jones” (Henry Jackman’s energetic score is an apparent homage to the work of John Williams), it’s rarely thrilling due to sluggish pacing and a screenplay that is cramming in too much for the film to sustain. One wishes the world was stranger, the expedition more exhilarating, and the familial themes more naturally woven in. Ultimately “Strange World” is fine for what it’s attempting to pull off, but it’s still a rare miss from Disney.