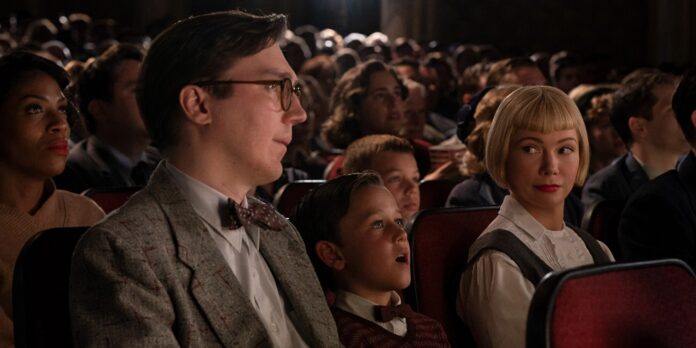 THE STORY – Young Sammy Fabelman falls in love with movies after his parents take him to see “The Greatest Show on Earth.” Armed with a camera, Sammy starts to make his own films at home, much to the delight of his supportive mother.

As the director of many of the biggest and most memorable movies of all time, Steven Spielberg is known for pairing humanity with grand spectacle. Though his films may often be driven by special effects, massive scope, or action and adventure, he finds the deeply personal heart at the center of each story. It’s why movies such as “E.T. The Extra-Terrestrial,” “Jaws” “and Jurassic Park” are still beloved to this day, among his many other hits ranging from blockbusters such as “Raiders Of The Lost Ark,” to epic war films such as “Saving Private Ryan,” to his extravagant musical last year, “West Side Story.” Now, Spielberg has joined a recent wave of filmmakers seeking to tell more autobiographical tales about the childhoods that made them into the artists and human beings they are today. His latest film, “The Fabelmans,” tells the complicated relationship between a burgeoning artist, his loving but divided parents, and the life events and movies that pushed him to become one of the most beloved storytellers of all time. It’s a vivid, earnest coming-of-age film that often plays out like a series of vignettes as we see how each moment, big and small, made Steven into the man he would grow up to be.

The film opens on Sammy Fabelman’s (Mateo Zoryon Francis-DeFord) first-ever movie-going experience with Cecil B. DeMille’s Best Picture-winning film, “The Greatest Show on Earth,” in 1952. The six-year-old Sammy is afraid to enter the dark theater, so his parents each take turns comforting him the best way they know how. His electrical engineer dad, Burt (Paul Dano), uses a scientific approach to calming his son, explaining how films are merely moving still images flashing at 24 frames every second. His mother, Mitzi (Michelle Williams), appeals to his heart and sense of wonder, telling Sammy that “movies are dreams that you never forget.” Ultimately Sammy watches the film and is mesmerized and even frightened, particularly at the violence of a train crash sequence. Though it terrifies him, he cannot stop thinking about it, and he becomes obsessed with recreating it using a toy train set his parents gave him for Hanukkah and capturing it on film to play over and over again. His supportive mother is his first audience member as he shows her the footage in his closet, in secret from his father, who sees the endeavor as silly and childish.

As Sammy grows up (now portrayed in his teenage years by relative newcomer but extraordinarily gifted Gabriel LaBelle), his love of filmmaking continues to grow. His sisters (Keeley Karsten and “Once Upon A Time In Hollywood’s” Julia Butters) and Boy Scout troop are his first stars as Sammy rips scenes directly from the silver screen, recreating them in his own scrappy ways, such as classic westerns and WWII battle scenes. All along the way, he’s inspired and encouraged by Mitzi, a pianist with a love of the arts. As an enthusiastic supporter of Sammy, he loves his mom deeply, though she’s often reckless, following her whims regardless of the damage they might cause to the Fabelman family. Williams is charming and off-beat in the role, floating through the film on her own emotive cloud that captures the manic depression of a 1950s suburban woman who is helplessly falling out of love with her husband. While the performance can vary in tone because of Mitzi’s ever-shifting feelings, Williams adds a vital layer of depth to her performance, letting us see the insecurity and brokenness underneath the overly-excited motherly love. It’s easy to see how this effusive presence could foster such a brilliant artist in Sammy, yet the heartbreak is inevitable.

Though the touching and moving story beats are numerous, “The Fabelmans” loses focus in its second act as conflict starts to pile up and Spielberg’s family drama loses steam. A job change takes the family to California, bringing martial drama, antisemitic bullies at a new school, a developing first romance with an enthusiastic Christian girl, continuing clashes over Sammy’s “hobby” with his father, and more into Sammy’s life. In the film’s transition from childhood to young adulthood, the dreamy nature of the first act fades into a more complicated journey for Sammy. Though that’s as it should be in any coming-of-age story, the story becomes more scattered, making the emotional threads less captivating. Thankfully Spielberg’s knack for rousing an audience comes back in full swing for the third act, culminating in a hilarious, crowd-pleasing ending that will leave even the most jaded audience member smiling as Sammy skips down the backlot of a Hollywood studio ready to enter the world as the filmmaker but influenced by the events we just witnessed for the preceding two and a half hours which we know through the years that followed, always found a way into his work.

With one of the best ensembles of the year, “The Fabelmans” gives everyone a moment (or many moments) to shine. LaBelle is perfectly cast as the young proto-Spielberg, with innocence and drive, along with comedic timing, that’s easy to root for and dream with. Dano’s straightforward squareness but warm energy balances well with Williams’ more expressive and free-spirited Mitski. Seth Rogen is perfectly suited for the character Bennie Loewy, Burt’s best friend and co-worker who becomes a surrogate uncle to the Fabelman kids and something more to Mitzi through his humorous charm contrasted with Burt’s bland demeanor. Rogen’s presence never distracts as he turns in one of his best dramatic performances since “Steve Jobs” despite the limited screen time. The fantastic Judd Hirsch storms the scene as Mitzi’s uncle, grabbing the film by the scruff of the neck for a brief nine minutes, and then suddenly vanishes, having left an indelible mark on Sammy on the nature of family and art, forcing him never to lose sight of his artistic endeavors no matter how tough life gets. Naturally, Spielberg’s trusted team of collaborators is also as reliable as ever. Janusz Kaminski’s blue and grey cinematography brings out the hazy feeling of a memory recollected, full of contrast and shadow, punctuated by just the right flairs of light. Often movies about movies (or about movie-making) can contain iconic images, and “The Fabelmans” has its fair share of unforgettable pictures despite being more grounded and less fantastical than some are probably anticipating. It’s a winning combination alongside a lovely, nostalgic piano-driven score from John Williams that’s more restrained and subtle than some of his more well-known collaborations, with Spielberg balancing instants of a vaudevillian playing style and a more modern sound.

“Family, art. It’ll tear you in two,” says Hirsch in his hilarious, brief but powerful turn. As we see the formative years of Sammy play out, it’s easy to see a man still wrestling with that battle between family and art today and how that conflict has driven his most recognized and distinguished works. “The Fabelmans” is ultimately an ode to the art that compels us, shields us from pain, and makes us come alive. It’s an unforgettable experience for anyone who loves movies and dreams about one-day telling stories by using past experiences to inform the present and influence the future.