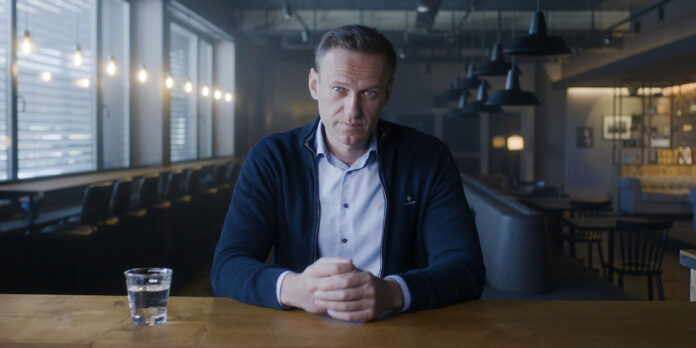 THE STORY – Follows the man who survived an assassination attempt by poisoning with a lethal nerve agent in August 2020. During his months-long recovery he makes shocking discoveries about the attempt on his life and decides to return home.

​​​Director Daniel Roher’s “Navalny” is many things. First and foremost, it is an essential political documentary that provides an unprecedented up-close look at Russia’s foremost leader of the opposition to President Vladimir Putin. In addition, it’s a moving family drama with a husband and father who is torn between meeting his family’s needs and meeting his political responsibility to his country. And finally, it’s a top-of-the-line thriller, complete with an astonishing central sequence that is jaw-dropping in its audacity and profound in its impact on the world. I suspect that this is exactly the film Alexei Navalny wanted.

The documentary, which garnered two major awards at this year’s Sundance Film Festival, came about almost accidentally. Roher was in Europe for another project when he learned from his journalist friend Christo Grozev that Navalny, who had been poisoned while on a flight back to Moscow, was about to be released from a German hospital. A week later, both men found themselves sitting across the table from Navalny in a Black Forest cottage, pitching the idea of a film. The media-savvy Navalny, whose movie-star looks and ease in front of the camera would make him an ideal subject for any film, saw the propaganda power that a film could offer, especially if it had the effectiveness of a populist thriller. The men had no idea of just how much of a thriller Roher would deliver.

To Navalny, the fact that Putin was behind his attempted murder was a given — Novichok, the drug used in the attempt on his life, was well known in Russian espionage circles to be Putin’s poison of choice in dispatching his political enemies. However, what Navalny wants to know and sets out to discover is the identity of those agents who actually perpetrated the deed. Luckily, he has at hand the investigative skills of Grozev, who uses phone records to narrow the likely perpetrators to a handful of top Russian agents.

At that moment, the unexpected occurs, sending “Navalny” soaring, as a bit of luck turns what has been a very good documentary into a galvanizing one. Having identified the handful of suspects and where he could find them, Navalny decides to place a few crank calls, a juvenile prank that wouldn’t be out of place on “Punk’d” or “Crank Yankers” two decades earlier. The well-trained Russian suspects who Navalny phones see through the ruse almost immediately and hang up.

Though this sequence only consists of three people seated at a table with a phone, what follows is jaw-dropping in its suspense. You know that what you’re watching really happened, yet, still you can’t believe your eyes and ears as it progresses. This is a high-wire act without a net, and the result is a sequence that’s as gripping as anything that I’ve seen in any “Bourne” movie (or any film, for that matter) in recent memory.

When trying to capture a subject as dynamic and proactive as Alexei Navalny, any good documentarian knows when to step back and when to follow wherever he leads you, whether he’s feeding local donkeys or unmasking Russian assassins. But that doesn’t mean Roher merely turns on his camera and sits back. A key reason why the phone call scene (and “Navalny” on the whole) works so effectively is Roher’s enormous skill in building to that sequence. Small moments that the filmmaker carefully places in the buildup add to our investment in the outcome and allow the payoff to becoming even more powerful.

As Navalny’s plane circles above Moscow and he makes good on his promise to return to Russia to face his punishment, the expressions on the faces of Navalny and his family are a telling reminder of just how much they all have sacrificed in support of his principled stand. His decision to return, declining an opportunity to use his platform in the West to decry the dangers of totalitarianism, seems inexplicable to many of us. Still, it seems consistent with the principled leader we have come to know. If for nothing else, “Navalny” serves as a welcome reminder that a few rare individuals around the world are prepared to give up everything they have to make a stand for what they believe is right. And in these troubled times, that kind of example is reassuring indeed.