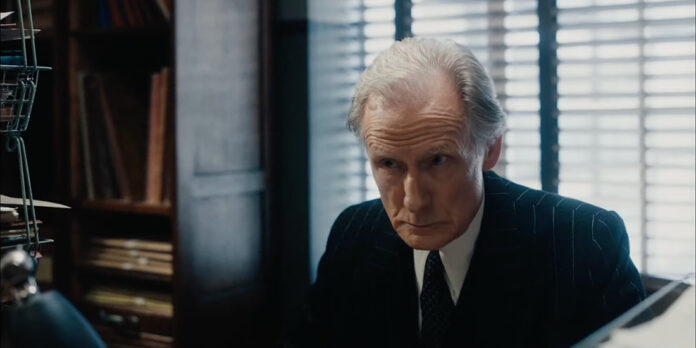 THE STORY – A veteran civil servant and bureaucratic cog in the rebuilding of Britain post-WWII, Williams (Bill Nighy), expertly pushes paperwork around a government office only to reckon with his existence when he’s diagnosed with a fatal illness. A widower, he conceals the condition from his grown son, spends an evening of debauchery with a bohemian writer in Brighton, and uncharacteristically avoids his office. But after a vivacious former co-worker, Margaret, inspires him to find meaning in his remaining days, Williams attempts to salvage a modest building project from bureaucratic purgatory.​

It might seem like a retelling of Akira Kurosawa’s 1952 classic “Ikiru” wouldn’t be relevant without significant updates. Yet, the story has a lasting quality and speaks directly to the times that we’re living in. Though director Oliver Hermanus has set his adaptation in 1953 London, its themes are distinctly relevant to what many of us are experiencing or will experience with the inevitability of death and making sense of our lives when we get closer to the end. With the loss that we have experienced globally due to the pandemic over the past few years, many people have questioned if they’re living their lives to the fullest in the face of proof of our mortality as a species. This is why whether you watch “Ikiru” or Hermanus’s “Living,” the themes will still be just as strong as they’ve always been.

Mr. Williams (Bill Nighy) is the head of a bureaucratic department in a building full of buttoned-up English paper-pushers. And we see that literal paper-pushing at play as a small group of ladies hoping to get a playground built are shuffled from one department to another, each claiming that the task isn’t in their domain. Newcomer Peter Wakeling (Alex Sharpe) has naïve hopes of making a difference, but the others in the office are clearly comfortable in their bureaucratic idleness, surrounded by towering stacks of papers. Williams, too, seems content, if a bit dour until he finds out at a doctor’s appointment that he has only six months left to live and has to confront the fact that he hasn’t actually been living. As a widow with a strained relationship with his son and daughter-in-law despite living in the same house with them, he is worried that his time on Earth will pass without making any impact or having any noteworthy experiences. It plunges him into a fog we see rather than hear about, with Nighy’s restrained reactions to events and people around him telling us just as much as his more flamboyant performances in the past.

He begins to chase something more while continuing to hide his diagnosis from his son and avoid his office, even spending a night out on the town in Brighton with a young bohemian (Tom Burke). The segment, with its color-grading to set it apart from the dull grey of London and Nighy’s poignant singing of a Scottish folk song, is melancholy in a subtle way. But it is Margaret (Aimee Lou Wood), a young woman from Williams’s office who needs a reference from him to secure herself a new job in a restaurant, who he hopes will be able to teach him how to live in his last months. He admires her vibrancy and cheerfulness, perfectly delivered both by Wood and her colorful costumes. The best scene of the whole film occurs between the two in a pub in which Nighy delivers a captivating monologue that serves as an impeccable reaffirmation of his talent as an actor, which has gone underappreciated for so long.

Aside from Nighy’s performance, much of the success of “Living” is due to Kazuo Ishiguro’s strong script. It is no surprise that the author of books like “Never Let Me Go” and “The Remains of the Day” is adept at writing this type of very British, restrained but deeply emotional story. He never oversteps into sentimentality, keeping the story and the characters grounded at all times.

The trickiest aspect of all is how the story calls back to Kurosawa’s “Ikiru” without feeling like a cheap imitation. Much of this is helped by some impeccable design elements, such as Emilie Levienaise-Farrouch’s gorgeous score, which complements the storytelling under Hermanus’s direction. ​”Living” has a distinctly vintage cinematic feeling, from its opening credits, done in the style of an older film from a bygone era, to its beautiful shots of 1950s London. It feels like a film from another time with perfectly handsome period costumes by Sandy Powell and immersive production design by Helen Scott that feel less like reconstructions of the 1950s and more like a film that was made at the time. This feeling of being transported back in time also allows us to re-enter another world that was dealing with the aftermath of a global crisis: in this case, London’s recovery from World War II, which had devastated both the city and its population.

Where the film falters is when it goes too long without Nighy on screen. The structuring of the story, with flashbacks and the inevitable event coming relatively early in its runtime, doesn’t always work well. Still, it is not enough of a problem to bring down the film entirely. Perhaps it’s simply that Nighy is so outstanding in the role of the regretful and yearning Williams that it’s disappointing when the film is not focused on him and instead shifts gears to some of the other characters who are not as engaging or interesting.

Audiences have been drawn to tales in which someone rediscovers the meaning of being alive for as long as people have been telling stories, whether that’s Charles Dickens’s “A Christmas Carol” or the holiday classic, “It’s a Wonderful Life.” But “Living” stands apart from these in that there is no grand chance for Williams to turn his life around – he only has a few months – and there’s no grand gesture, no huge adventure that he’ll find meaning in, but rather human connections and a small task that he may not even be remembered for. Yet, perhaps the film is even more effective for that. Different enough from “Ikiru” to be worth a remake – particularly considering that much of its audience will not have seen the original –it’s the sort of distinctively British independent film with a particular set of followers but with enough universality to appeal to a broad audience. It may be patient and quiet in its execution, much like Nighy’s performance as Williams, but that’s part of its unassuming beauty.