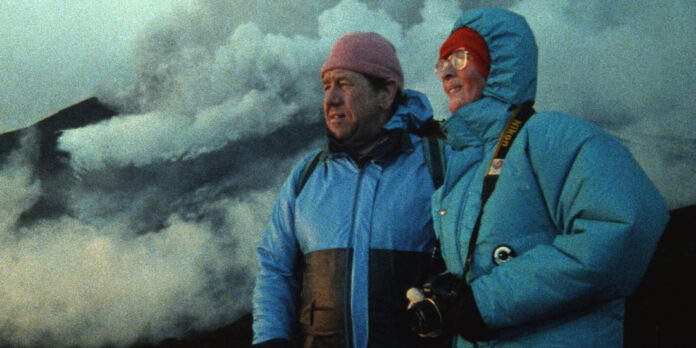 THE STORY – Katia and Maurice Krafft loved two things – each other and volcanoes. For two decades, the daring French volcanologist couple was seduced by the thrill and danger of this elemental love triangle. They roamed the planet, chasing eruptions and their aftermath, documenting their discoveries in stunning photographs and breathtaking film to share with an increasingly curious public in media appearances and lecture tours. Ultimately, Katia and Maurice would lose their lives during a 1991 volcanic explosion on Japan’s Mount Unzen, but they would leave a legacy that would forever enrich our knowledge of the natural world.

​Every Sundance, a deluge of documentaries make their debut at the festival, from last year’s “Flee” to 2020’s “Crip Camp” to 2019’s Oscar-winning “American Factory,” and so on and so forth. This year was no different, bringing us Grand Jury Prize winner “The Exiles,” Festival Favorite “Navalny,” and Jonathan Oppenheim Editing Award winner “Fire of Love,” which earned a rapturous reception upon its premiere and netted a fair number of fans throughout the festival. Following intrepid scientists and spouses Katia and Maurice Krafft, “Fire of Love” chronicles their two-decade-long courtship, which tragically concluded in 1991 after the two died in a pyroclastic flow on Mount Unzen in Japan. Still, to this day, the Kraffts are fondly remembered for being pioneers in filming, photographing, and recording volcanos, capturing revolutionary footage that continues to be used as a resource in the volcanologist community – and that’s precisely what Sara Dosa’s documentary sets out to display, to keep their memory alive.

What’s awe-inspiring about “Fire of Love” is its astounding archival footage, expertly edited together by Erin Casper and Jocelyne Chaput. The Kraffts’ footage was revolutionary at the time of its release as well, but compiling it all together here makes their lifelong achievements all the more monumental, particularly when assessing the unforeseen level of access they were able to have to these volcanoes and their eruptions, sometimes even getting within feet of lava flows. However, the most striking aspect of this footage is its ability to showcase the genuine scale and scope of the volcanoes the Kraffts observed, comparing their gigantic grandeur to the almost insect-like individuals who inspect them. Rarely has the might of Mother Nature been as well-depicted as it is here, and that’s on both the Kraffts for bravely filming this footage in the first place and the crew on “Fire of Love” who so carefully constructed a picture that would preserve the potency of this imagery.

However, besides its beautiful visuals, the element that makes you stick with “Fire of Love” is the stirring love story at its center. Katia and Maurice Krafft had the kind of all-consuming love that seems to only exist in films or fairy tales, yet it was real for them. They not only spent their lives pursuing their passions, but they did it with each other. Even absent ‘talking head’ interviews from the two, the team behind “Fire of Love” assures that we get a good feel for both of their specific personalities – with Katia being the more reserved member of this powerhouse pairing and Maurice often serving as the ‘showman’ of sorts – and the way they complimented and clashed with each other, while ultimately always coming back as a team by the end of the day. This love possesses a breathtaking beauty on par with any vivacious volcano, and it sets “Fire of Love” apart from any old “science doc” due to the affecting earnestness they bring to the entire affair.

Additionally, Miranda July – best known for writing and directing films like “Kajillionaire” and “Me and You and Everyone We Know” – offers a quaint and quirky narration. She excellently matches the eccentricity of our main couple and adds a unique flavor to the recitation of these facts. When the film stumbles into slow moments – particularly in the second act – July’s jovial narration holds our interest. She’s assisted further by the aforementioned Casper and Chaput, who almost always bring the film’s balance between striking scientific documentation and sweeping love story back into focus, making the crushing conclusion all the more impactful when all is said and done.

Whereas some documentaries can come across as ‘impersonal,’ surveying their subject from a distance or with an aggressively ‘clinical’ approach, “Fire of Love” is the exact opposite, suffusing this story with sweet sincerity and putting feelings front and center by digging deep into the romance between the Kraffts. You’ve never seen volcano footage quite like this – and you’re unlikely to see it anywhere else. The spectacle is undoubtedly stupefying but it’s the captivating chemistry between Katia and Maurice that will keep you riveted until the credits roll.