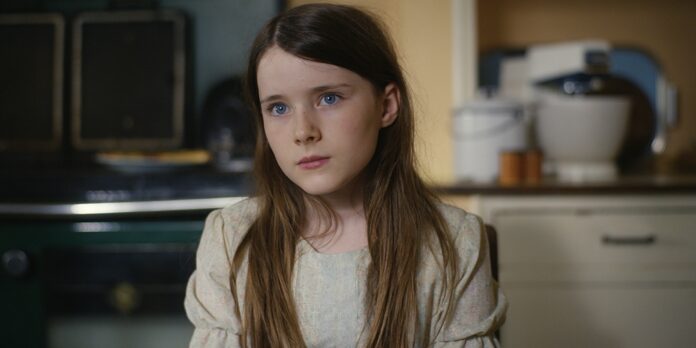 THE STORY – Rural Ireland 1981. A quiet, neglected girl is sent away from her dysfunctional family to live with foster parents for the summer. She blossoms in their case, but in this house where there are meant to be no secrets, she discovers one.

Whether you are looking at some strong performances such as Paul Mescal in “Aftersun” or Jessie Buckley in “Women Talking,” to storytelling such as “The Banshees of Inisherin,” Irish cinema has treated us well in 2022. Ireland proved to have a lot of confidence in their official submission for this year’s Best International Feature Film race at the Academy Awards with “The Quiet Girl,” the first film in the Irish language to make over €1m ($971,000) at the worldwide box office. To show how impressive that number is, the previous record was held by the potato famine drama “Arracht,” which grossed €160,000 at its box office in 2019. In fact, Ireland was the first country this year to announce its film selection, giving the film an early boost in the Best International Feature Film osar race and allowing critics and voters a chance to catch up with it before any other contenders were officially announced.

In the summer of 1981, nine-year-old Cáit (Catherine Clinch) is sent off by her parents to stay in the Cinnsealach household with her mother’s cousin Eibhlin (Carrie Crowley) and her husband Seán (Andrew Bennett). Eibhlin welcomes her into their home with open arms, but Seán is a bit more hesitant and initially acts cold toward her. After an incident where Cáit wanders off their farm, Seán tries to bond with her, with the two becoming close. When the Cinnsealach family attends a wake, a neighbor agrees to look after Cáit for a couple of hours. The neighbor talks to Cáit about events in the Cinnsealach’s past, and she uncovers a dark secret within the household.

“The Quiet Girl’s” first act focuses on the family dynamic between Cáit and her biological parents, as well as her siblings. The viewer is immediately drawn to Cáit as a character because of her quiet nature, which many of us can surely relate to and sympathize with compared to the louder characters around her. However, these characters lean into heavy stereotypes of traditional bad parenting, creating a focal storyline that feels repetitive to other stories told and, thus, leaves the narrative becoming predictable. Director Colm Bairéad’s screenplay does steer away from the stereotypes when the Cinnsealach household is introduced, as it is refreshing to see a difference in perspective between Eibhlin and Seán with this change in their life. The dynamic between Seán and Cáit becomes the film’s main storyline, and Bairéad knows precisely where to tug at the heartstrings to maximum impact in the subtlest of ways.

Throughout “The Quiet Girl,” it becomes clear quickly that there is a secret within the Cinnsealach household. There are specific moments that hint at the secret near the film’s start, with those sequences being elevated once one reflects back after knowing the whole story. The secret is not the driving force of the story, though, as the quiet and simple presentation of the film instead makes the viewer focus on the relationships that are developed. Bairéad takes his time, particularly with the dynamic between Seán and Cáit, and rewards the viewer with the film’s memorable final act. The film’s closing shot completes the emotional arc of Cáit, which may be the best of any film released this year. The way Bairéad chooses to end this film, using a straightforward interaction to summarise how Cáit feels about Seán, is enough to render one speechless. It’s a phenomenal exercise in modest filmmaking, rich with nuance and sophistication.

While 2022 may be the year of the return of big blockbusters, intimate tales have had the most significant impact on many moviegoing audiences this year. Critics groups and voting bodies may be drawn to Charlotte Wells’ “Aftersun” this year, but there is no reason why “The Quiet Girl” shouldn’t be talked about in the same vein as well. This beautiful tale rewards patience from the viewer as it allows you to emotionally invest yourself in Cáit’s story by placing you in her shoes and carefully observing the world she lives in. Many people will be able to relate to the isolation she experiences and the struggle to find the right family, making this a powerful film that deserves to be seen and recognized by many.

<b>THE GOOD - </b>Catherine Clinch gives a fantastic debut performance, matching that of her more experienced co-stars. The deliberately quiet presentation allows for the main arc of the dynamic between Cáit and the Cinnsealach family to be prominent, ending the film on an incredibly emotional note.<br><br> <b>THE BAD - </b>The film leans heavily into stereotypes in the opening act of the film, creating relationships between Cáit and her biological family that feel predictable. Some people may struggle with the slow pacing and with how quiet the film is, particularly in the first half.<br><br> <b>THE OSCAR PROSPECTS - </b><a href="/oscar-predictions-best-international-feature/">Best International Feature Film</a><br><br> <b>THE FINAL SCORE - </b>8/10<br><br>"THE QUIET GIRL"