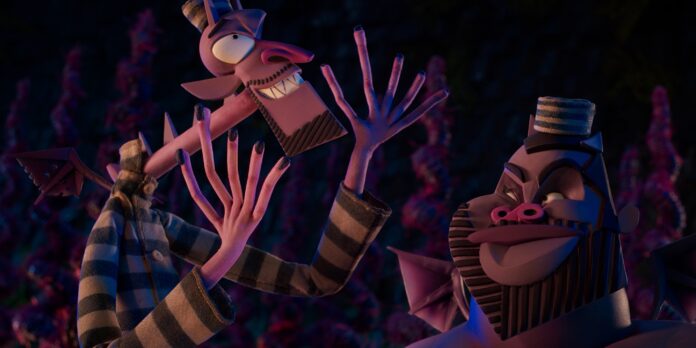 THE STORY – The two devious demon brothers Wendell and Wild have to face their arch-enemy with the help of the nun Sister Helly, who is notorious for expelling demons. However, the brothers are not only plagued by her, but also by her altar boys.

From the brilliant visionary behind “The Nightmare Before Christmas,” and “James and the Giant Peach” comes another dark, stop-motion animated feature. Director Henry Selick is back in his element with “Wendell & Wild,” an entertaining coming-of-age fantasy that comes thirteen years after his previous film, “Coraline.” While not as terrifying as the button-eyed nightmare fuel in “Coraline,” Selick once again proves his artistry in an awe-inspiring sub-genre of animation. The director’s signature spooky handcrafted style is crawling all over “Wendell & Wild,” which introduces an exciting collaboration between Selick and co-writer Jordan Peele for a tale about inner demons and family healing. Peele’s insightful humor and remarkable experience in the horror genre shine with something to say. There are features to admire in the sprawling ambition of the story and the stunning animation that brings creative ideas to life. Clever punk elements add layers to a recurring core theme of rebellion. The world-building is vivid, and the characters are fun, but the story is crowded with many disjointed subplots. “Wendell & Wild” stands out as a horror-comedy that fulfills its animated promise, only leaving you wanting more from the story itself.

The story follows protagonist Kat Elliott (Lyric Ross), an angry teenager holding onto survivor’s guilt from the death of her parents when she was a little girl. Ever since this tragic loss, their hometown of Rust Bank has deteriorated into a ghost town. Once thriving with people and businesses, the place becomes gloomy and grey. Buildings are covered with posters of a company that wants to build a private prison on the land. The corporate villains of the film are quickly identifiable, and their plot looms over Rust Bank like a stormy cloud. Meanwhile, after years of foster care, Kat attends the town’s Catholic school, where she meets a variety of characters: teen classmate Raul (Sam Zelaya), teacher Sister Helley (Angela Bassett), and headmaster Father Bests (James Hong), to name a few. Walking the halls with her father’s boom box blaring, Kat is not in the mood to make friends, understandably protecting herself from the world. But all that changes when she unearths supernatural powers (with the guidance of a teddy bear) and meets her demons, who have names.

Kat’s inner demons take on the form of scheming brothers Wendell (Keegan-Michael Key) and Wild (Jordan Peele), who reside under the nose of their father, Buffalo Belzer (Ving Rhames). When the demons discover that Kat has a portal to the Land of the Living, they appear in a dream of hers and propose that she summon them above ground. Feeling she has nothing else to lose, she agrees on one condition: that the demons must bring her parents back to life. What follows is a rebellious adventure in a world where demons are not the scariest part. The story is embedded with punk-rock energy that also lives in the characters, who challenge positions of authority and learn the truth about their surroundings in the process. Kat’s character speaks to resonating themes of approaching one’s inner demons face-to-face and rebuilding trust in the company of a supportive community. The story flourishes when the film focuses on the protagonist and her relationship with the demons. Kat navigating her surroundings to reclaim what she lost while facing obstacles from inside and out is a strong core. But the screenplay has a lot of deflecting moving parts, not all of which are fleshed out.

“Wendell & Wild” gets pulled in multiple directions, often at odds with where to go. Commentary on the prison-industrial complex is one example of how the film introduces a narrative established in real-life horror that pushes boundaries but becomes more like a footnote. The villains are clear with intention; they reek of dollar sign eyes and heartlessness. As they scheme their way to take over Rust Bank, using various characters as pawns, their actions spawn subplots that are too loosely connected. Not enough time is spent fleshing out all these new threads and the zombie characters born from them. Consequently, the film feels rushed in terms of story development and key revelations. This can be felt strongest in the final act, where several subplots are given conclusions too quick even to digest. Intriguing dynamics between characters are also too glossed over, particularly between Kat and the mysterious Sister Helley, who has knowledge of Kat’s superpowers.

While the story is swimming in an overflow of ideas, there are plenty of positive elements to the film that make it stand out. The characters are fascinating to watch and are brought to life by fantastic voice work. Iconic duo Key and Peele bring delightful humor to their demon characters and easily bounce off one another. As the protagonist Kat, Lyric Ross gives a wonderful performance that infuses angst, hurt, loss, and hope. There is strong representation to be found in the film, memorably with trans character Raul, who holds space as Kat’s sidekick while also having his own backstory. The screenplay incorporates different aspects of his life and personality as standalone features. The film also lives up to the expectation of Selick’s return to stop-motion animation. The visual world-building is wondrous. Spooky, slimy, nightmarish production design gives the land of the living, the dead, and the in-between a miraculous goth edge. The detailed animation is a marvel – from the fuzz of a hair strand to the lifelike material of a teddy bear. As well the look and sound of a pop-up booklet unfolding – in a scene of Wendell and Wild revealing their theme park presentation, a shared dream of theirs – is an excellent example of sound design adding weight to the visuals.

Plenty goes on in “Wendell & Wild,” and while not all of it comes together harmoniously, the level of ambition and creativity is admirable. The film touches on strong themes, from facing your inner demons and the transcendent power of a family’s bond to the relentless grip horrors of the past have on the present. The punk elements are a hit, including an energizing soundtrack that gives a boost to many scenes. The soundtrack features hints of choral music that will remind you of “Coraline” and is used here so effectively. Enough of “Wendell & Wild” works to overpower the weaknesses in pacing and story development. Selick and Peele are a dream pairing for what they each bring to nightmarish storytelling, a concoction of family-friendly terror and incredible modern imagination. The film has heart and an entertaining, whimsical approach to a strange, grounded, earnest story. If only the competing subplots were joined as firmly as the collaboration between two giants of the horror genre.

Powered by JustWatch
Share
Facebook
Twitter
Copy URL
Previous article
“THE GRAB”
Next article
Not All Biopics Can Be Awards Contenders: The Oscar Potential For “Blonde”