“ALL QUIET ON THE WESTERN FRONT” 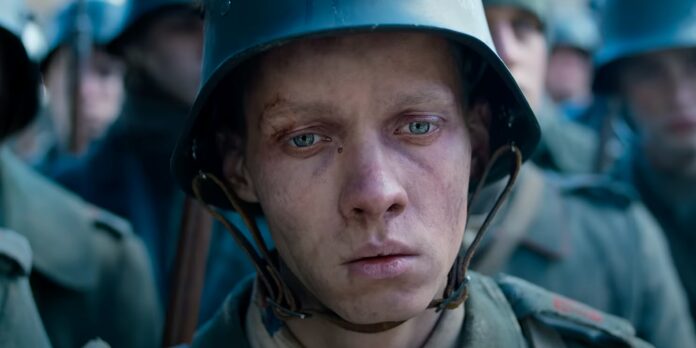 THE STORY – When 17-year-old Paul joins the Western Front in World War I, his initial excitement is soon shattered by the grim reality of life in the trenches.

We have seen plenty of war films throughout cinematic history. Many tend to tell similar stories of heroism, bravery, and courage in the face of overwhelming odds, which results in victory, typically told from the American or English perspective. “All Quiet On The Western Front” is a classic 1929 novel by Erich Maria Remarque that showed the world, in many cases, for the first time ever, the true horror of what millions of young men experienced as they marched off with a false sense of nationalism and pride in what they thought would be almost an adventure of sorts. However, just as Remarque’s novel states, “Death is not an adventure for those who stand face to face with it.” That is what director Edward Berger’s remarkable adaptation of the famous war novel is very much about, as death comes for the young German soldiers in all shapes and forms in what is the most terrifyingly realistic depiction of combat and psychological torment during times of war captured on screen since “Saving Private Ryan.” Combining elements of “Son Of Saul,” “Come And See” and with a backdrop that will remind viewers of other great World War I films such “Paths Of Glory” and “1917,” “All Quiet On The Western Front” is an exemplary war film for the ages that is just as relevant and impactful as the 1930 Oscar Best Picture-winning American version, if not, even better.

It’s 1917 in Germany; Paul Bäumer (Felix Kammerer) and his underage friends all enlist in the war with romanticized ideas of what the experience will be like. When they arrive, their confidence and drive are soon annihilated by the grim reality of what war really is. Suddenly Paul is just another body amongst thousands with little training, resources, or chances for survival as he must face down weapons and tactics previously never before seen in warfare. As the days go on and the human cost of war increases, Paul’s mental state declines, and his odds of making it back home decline with it. His only hope of survival on a long enough timeline is the possibility of a ceasefire and an end to the war.

After focusing on a few shots of the beautiful natural landscape, we are plunged into the dark, visceral, and unrelentingly nightmarish hellscape of trench warfare as we watch Paul fight with every fiber of his being to survive. The outcome as to whether you live or die is purely based on luck. No matter how strong, skilled, intelligent, careful, or prepared you are, a random bullet could be the one that ends your life at any given moment. As we watch numerous bodies get mowed down by the barrage of bullets and explosions, the fight eventually draws tighter to close-quarters combat as blades, flamethrowers, and bare fists are used to claw for dear life and kill your enemy before they do the same to you.

It is in these closer proximity moments that Berger draws the audience even further into Paul’s deteriorating mental state, and we slowly realize that no matter whose perspective this story is told from, whether it’s American, English, German, etc., we’re all still human beings fighting for survival. Suddenly the reality of war is all Paul can think about, not what drew him into the conflict in the first place or what the politicians in Germany are discussing simultaneously as the fighting wages on. Berger contrasts Paul’s scenes of chaotic mayhem and destruction with quieter scenes of contemplation featuring Daniel Brühl as German writer and politician Matthias Erzberger. His desire for a ceasefire is given a greater sense of urgency as we see with our own eyes the human cost the war is taking on Germany. In that regard, “All Quiet On The Western Front” is a story all about contrasts. Whether it’s the contrast of life and death, peace and war, calm and loud, beautiful and grotesque, Berger’s adaptation is constantly showing us how two sides are always in opposition of one another as we try to make sense of this senseless world and fight to stay alive in it for a better tomorrow.

On the craft front, “All Quiet On The Western Front” is the technical achievement of the year. James Friend’s cinematography vividly captures the smoked-filled skies of a war-torn country that’s been obliterated after years of bloodshed. His framing, composition, and use of color and long takes give a staggeringly bleak “you are there” quality that only the best war films can achieve. He’s aided by some grand scale production design work that has to litter the battlefields with dozens of bodies, faithfully re-create the trench warfare of the time, and distinguish that from the aristocratic lifestyle of the wealthy politicians back home. The soundscape is also a cinematic astonishment. It should not surprise anyone to hear the sound work in a war film is top-notch but to experience “All Quiet On The Western Front” in a theater with surround sound is truly horrifying at times, for when the brutal onslaught of noise finally gives the audience a breather, the deceptively modern score still manages to cast a dreaded sense of unease as if to warn Paul and his fellow soldiers that the reprieve they’re enjoying will not last long. Add to this a ruthless but measured sense of pacing in the film’s editing, along with some outstanding makeup work to re-create all of the bloody wounds, scars, and smeared dirt and mud, and you have a film that is firing on all cylinders from every craft department.

“All Quiet On The Western Front” tells a familiar story but with a level of technical mastery, petrifying immersion, and thematic relevance rarely seen today. When Paul remarks to his brothers-in-arms that he’s “afraid of what’s to come,” he could be talking about the next battle, but we know he’s talking about life after the world’s first great war. No one who experienced it would ever be the same again, no matter which side they were on. On the German side, it further pushed the rise of fascism, eventually leading to a second world war. Perhaps Paul is reflecting on this, knowing full well that a ceasefire will only lead to resentment and a stronger, harsher response from Germany in the future, fueled by an even deeper sense of purpose and hatred. Or maybe, he’s reflecting on life after death, for no one truly knows what lies beyond our time on this planet. As Paul pushes further across the battlelines, getting luckier with each passing day as peace talks that could bring the war to a close continue, death claims all those who surround him, sometimes in the most unexpected ways. Eventually, his luck will, too, run out. Such rumination on the very nature of why we fight to stay alive and at what cost when we all know death eventually is the true victor of war is what makes this version of “All Quiet On The Western Front” vital, must-see viewing.