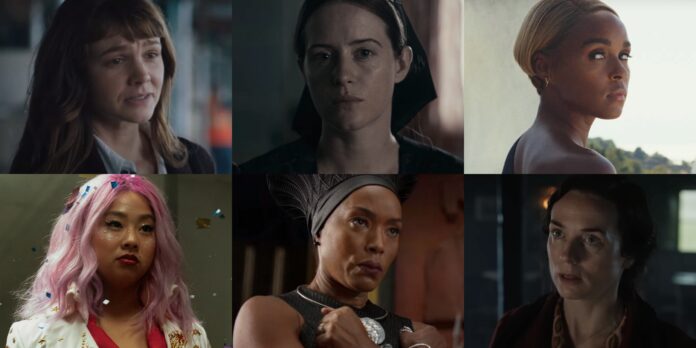 The Best Supporting Actress race has seen a lot of shakeups over the past month. With the fall film festivals introducing a slew of contenders for consideration, plus the seismic shifts in category placement, it’s become one of the most stacked and exciting races in this year’s awards season. There have been some Oscar years where we’ve unfortunately struggled to find enough contenders to fill up a category and find ourselves defaulting to some pre-determined and some might say lazy choices. That is certainly not the case this year as we have an abundance of riches to consider from all of the remarkable ladies in this category. Let’s take a look at all of the contenders and see where things lie as of today…

The newest development in the race is the news that broke yesterday that Carrie Mulligan will campaign in the Best Supporting Actress category instead of Best Actress. Her co-star Zoe Kazan will contend in that category instead. Having seen “She Said,” I’m of the belief that this is the second case of massive category fraud we’ve seen this year (the other being Michelle Williams’ move out of this category and into Best Actress for her turn in Steven Spielberg’s “The Fabelmans“). Mulligan certainly has enough material to crack the lineup, but that’s because it’s a co-lead performance alongside Kazan. We see practically half the film from Mulligan’s perspective without Kazan’s presence, and the same can be said for Kazan. It’s a very strategic move on Universal and Mulligan’s part since the studio’s other presumed frontrunner, Michelle Williams, is no longer in this category. Divide and conquer, I suppose. I don’t personally agree with it, but considering the subject matter, strong reception from its premiere at NYFF60, and Mulligan’s leftover goodwill after coming close to her first Oscar win two years ago for “Promising Young Woman,” she may have all of the right ingredients to bring her to the podium this time. There’s also the curious case of Margot Robbie in Damien Chazelle’s upcoming “Babylon.” Some feel she’ll be campaigned in Best Actress and others feel Paramount might seize an opportunity to push her in Best Supporting Actress, arguing that the film belongs to newcomer Diego Calva and everyone else supports his character’s story. It’s yet another example of potential category fraud that we currently don’t know about yet but will hopefully find out in two months when the film goes to theaters in wide release on December 23rd.

The Women Of “Women Talking”

Sarah Polley’s “Women Talking” features the year’s best ensemble. The film is an embarrassment of riches of wonderful performances from every actress (and actor for Ben Whishaw) involved. Everyone is so good and receives a moment to shine in Polley’s balanced screenplay that it’s challenging to deduce who will eventually emerge as the clear favorite amongst critics and awards voters. The general consensus seems to be on Claire Foy and Jessie Buckley at the moment who have the most dramatically impactful scenes and monologues; the former is seeking her first Oscar nomination after astounding audiences with her television work on Netflix’s “The Crown,” and the other is hot off of her first Oscar nomination last year for “The Lost Daughter.” Rooney Mara will be campaigned in the Best Actress category (I feel they should all go supporting, but the studio typically believes that someone needs to go lead), and Frances McDormand’s role lacks the screen time of the others to make it in (she is not being campaigned by MGM in either category). However, I would watch out for a surprise entry from either Sheila McCarthy or Judith Ivey, two well-respected actresses who have never received Oscar nominations. You could potentially fill up the entire Best Supporting Actress category with the women from “Women Talking.” Still, much like how we were saying the same thing this time two years ago for “The Trial Of The Chicago 7” and “One Night In Miami” in the Best Supporting Actor category, eventually, the consensus will become apparent, and one, maybe two, contenders will likely emerge.

The Best Year Of Her Career

Hong Chau came so close to an Oscar nomination in this category in 2017 for her role in Alexander Payne’s “Downsizing,” having received nominations from the Critics Choice, Golden Globes, and SAG for Best Supporting Actress. It was not meant to be, as the film proved to be divisive and was ignored by the Academy entirely. While Chau has continued to work since then, this year she has had three performances (the most she’s had in a single year) which all showcase her range and dramatic gifts as an actress. Kelly Reichardt’s “Showing Up” will be receiving a theatrical release from A24 in 2023 after it played at Cannes and NYFF but it received positive notices for Chau’s supporting performance, and “The Menu” is undoubtedly a commercial play for Searchlight Pictures but will hopefully only help to propel Chau into voters’ minds for her work in Darren Aronofsky’s “The Whale.” While the film is filled with astonishing performances from Best Actor frontrunner Brendan Fraser, “Stranger Things” star Sadie Sink and Samantha Morton (who makes the most of her single scene), it’s Chau’s take on Liz, the caregiver to Fraser’s Charlie which leaves the most significant lasting impact. Should A24 play their cards correctly (which they’re currently keeping very close to the chest for as of this writing, a trailer has still not been released yet for “The Whale“), Chau could ride the wave of success from the film, on the back of the consistently strong work she’s been putting out for years to her first nomination.

While we’re discussing the chances of some of these other actresses who have some pre-built-in narratives, there are the performances that have managed to stand out and rise to the top on the sheer power of their work. Actresses such as Kerry Condon in Martin McDonagh’s “The Banshees Of Inisherin,” Janelle Monae (who should’ve received an Oscar nomination in 2016 for “Hidden Figures“) in Rian Johnson’s “Glass Onion: A Knives Out Mystery,” Dolly de Leon in Ruben Ostlund’s “Triangle Of Sadness,” Thuso Mbedu in Gina Prince-Bythewood’s “The Woman King,” and Stephanie Hsu in the Daniels’ “Everything Everywhere All At Once.” And although she might not be new on the scene, Greta Gerwig is certainly a standout in Noah Baumbach’s strange and bold Don DeLillo adaptation, “White Noise.” Many pundits didn’t have these performances on their radar prior to seeing the films themselves, but now that we’re past the fall film festivals, these are some of the most buzzed-about performances of the year, and they’re all worthy of recognition. Some will benefit from their films possibly being Best Picture nominees, and others will need the critics to support them once we get to the precursors. One thing is for sure though; their presence has made the category unpredictably exciting, for any final lineup of five Oscar nominees could include any of their names.

And let’s not forget the women who could strengthen this category even more after a career of goodwill, excellent work, and delivering the right performance at the right time in the right film. Names like Angela Bassett (previous Oscar nominee for Best Actress for 1993’s “What’s Love Got To Do With It”), who has been singled out in all of the trailer reactions to “Black Panther: Wakanda Forever.” Many are wondering if, due to the popularity of “Hacks,” if Emmy-winner Jean Smart can make it in for “Babylon” and receive her first Oscar nomination. German actress Nina Hoss has been producing terrific work for years all over the world (see her fantastic performance in “Phoneix” if you haven’t already), but she might be able to ride the coattails of Best Actress frontrunner Cate Blanchett for a Best Supporting Actress nomination in Todd Field’s “TÁR.” The film may have received mixed reviews but don’t count out “The Son” yet, which features a heartbreaking turn from recent “Marriage Story” Oscar-winner Laura Dern (Watch out for her co-star Vanessa Kirby in this category as well). And given the timely release of “Halloween Ends,” Jamie Lee Curtis has been on a giant promotional tour and is constantly reminding everyone of how awesome “Everything Everywhere All At Once” is. Will voters finally realize she’s awesome in it too, and always has been throughout her career, by finally rewarding her with her first Oscar nomination?

We’re at a point right now where the Best Supporting Actress category is ripe with so many possible outcomes for who will be amongst the five Oscar nominees. There are still many contenders sight unseen who could still find their way into the final lineup. And who knows? Maybe Oscar voters decide to go their own way as they did with Lakeith Stanfield in 2020 with “Judas And The Black Messiah” by ignoring the awards campaign and placing Michelle Williams back into the supporting category, which would throw this already competitive lineup into further chaos. Who do you think will be nominated at this point? Are there any contenders you could see dropping off the further we get into awards season? Please let us know in the comments section below or on our Twitter account and check out my and the entire NBP team’s Oscar predictions for Best Supporting Actress and other categories here.