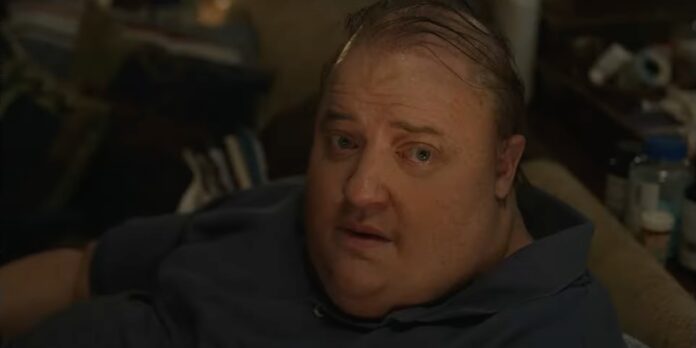 ​​An online Zoom class on expository writing features a screen filled with the faces of students, with only the square for the class instructor blacked out, the victim of a malfunctioning laptop camera, he claims. We are soon taken through the laptop screen to meet Charlie, the instructor hiding behind that black screen. There’s a reason why Charlie lied about his camera malfunctioning — he weighs almost 600 pounds and is primarily confined to the sunken cushions of his living room couch, a prisoner within his own body.

Still shattered by the suicide of his lover Alan, Charlie has embarked on a course of self-destruction, eating so much that his body will eventually give out, and his torment will be over. He is, however, surrounded by loved ones who want to instill in him the will to live. Most notably, Liz (Hong Chau), Alan’s sister and a primary nurse by training, tends to Charlie’s many medical needs and strongly urges him to go to the hospital before his congestive heart failure becomes fatal. Yet, at the same time, she enables him by providing meatball subs with extra cheese.

Charlie’s quiet life is soon interrupted by the appearance of Elder Thomas (Ty Simpkins), a missionary of a Mormon-like cult who wants Charlie to embrace Jesus Christ as his Lord and Savior. It turns out that Charlie knows quite a bit about this cult since Alan was a member, and the conflict between his church’s teachings and his sexuality caused Alan to jump off a bridge. Thomas is invited to stay since Charlie wants to know what really happened that day.

Suddenly upending Charlie’s life, though, is his daughter Ellie (Sadie Sink), whom he had not seen in ten years and is still bitter about being abandoned by her dad when he walked away from his family. Charlie desperately wants to reconnect with Ellie, even offering to pay her if only she would agree to talk to him again. Ellie’s tough but about to crack; a misfit who, afraid of being attacked herself, lashes out first, and the venom she directs toward Charlie is particularly stinging, even if much of it is true. Frankly, he doesn’t care — you can see from the look in his eyes that he still loves her desperately.

It is in those moments that lies the key to the brilliance of Fraser’s performance. In many cases where makeup is used to change an actor’s appearance, the appliances obscure the actor’s work, or, as is often said, “the makeup did all the acting.” Not so here. Even under the weight of a 300-pound fat suit and prosthetics that severely hamper his every movement and expression, all it takes is one look at Fraser’s face, and under all that artificial fat, we fully see those eyes. There he is! There’s the guy we love and have missed! And it’s primarily through Fraser’s expressive eyes that we are allowed to see Charlie fully.

A great deal of the effectiveness of “The Whale” lies in the quality of the actors in this small cast. Sink probably has the film’s most challenging female role, as Ellie is written as a brute pain for 95% of the film, with her redemption only coming in the film’s final 15 minutes. It is a tough character structure to make sympathetic. Still, Sink is accomplished enough that she manages to show shadings between the barbs, particularly in her scenes with Simpkin’s Thomas, where we begin to see the first cracks in her rigid exterior. Also providing brief but strong support is Samantha Morton’s Mary, who is still bitter that Charlie walked away from their marriage for a man, but their shared love and worry over Ellie reveals that there is still a spark between them. (Morton’s zingers here will be the stuff of internet memes for months to come.)

Ultimately, though, it is Hong Chau’s work that, next to Fraser’s, stays with audiences the most. Her Liz is a walking contradiction, as both a woman who wants to save Charlie by her medical intervention yet enables his very destruction by providing the food that can end his life. But still, they stay together. It would seem that by keeping Charlie alive, she could keep alive the spirit of her late brother for as long as possible. It is moving work by Hong, delicately performed, and one that stays in the memory long after the credits have rolled.

Aronofsky does nothing to hide the film’s theatrical origins, shooting the film with longtime cinematographer Matthew Libatique and framing it in Academy ratio as if to emphasize the confines of the play and the closed-in world in which Charlie exists. Playwright Samuel D. Hunter has adapted his stage play to film and made some wise changes in the transition, shrewdly resisting the temptation to open up the play with any outside scenes. It works just fine without them, although it doesn’t shake the creakiness of the play’s first act, in which little occurs, and Charlie is often reduced to being a recessive mess, muttering “I’m sorrys” to even the mildest criticism. Happily, though, “The Whale” springs to life in its final two acts where the film truly catches fire. The last five minutes are, in fact, utterly transcendent.

Aronofsky wisely steps back and lets the story speak for itself for much of the film’s first half, carefully calibrating the film’s tone, which allows his actors to be the focus of attention. But those trademark Aronofsky touches soon rear their head when Charlie decides to end it all, gorging himself with a nightmare orgy of food reminiscent of the most obsessive moments of “Black Swan” and giving off a kind of horror vibe that only Aronofsky can supply. From there, the film keeps driving until its final emotional shot, which drew an audible gasp and visible tears as audience members left the screening.

Fraser has one unique element in his favor- the audience wants to see him succeed like no other actor out there- and that love inevitably transfers over to Charlie. The fact that Fraser is so good in the role and that Aronofsky is so skilled at shaping the performance combine to make “The Whale” a uniquely powerful film experience. One more thing: bring Kleenex. I guarantee you’ll need it.