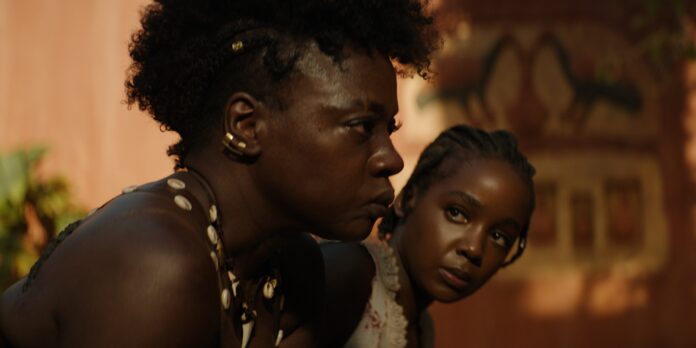 THE STORY – Set in the 19th century in the West African kingdom of Dahomey, The Woman King follows the all-female group of warriors, the Agojie, who protect the kingdom. The group’s general Nanisca trains a new generation of warriors to fight against an enemy who wants to destroy their way of life.
​
THE CAST – Viola Davis, Thuso Mbedu, Lashana Lynch, Sheila Atim & John Boyega

These days, old-fashioned historical epics are decidedly rarer than they used to be, with Best Picture-winning films like “Braveheart” and “Gladiator” having few contemporary counterparts. Gina Prince-Bythewood (“The Old Guard“) breathes new life into the genre with “The Woman King, as she fills the film with the same excitement, heart, and grand scale found in those other films, but from an under-seen perspective in cinematic history. It’s got that rare combination of sincerity and intensity that makes for a thrillingly singular experience. “The Woman King” is a true crowd-pleaser firing on all cylinders with passion from everyone involved.

From the opening moments, we see the impressive and deadly skill of the Agojie, a Black, all-female military regiment from the Kingdom of Dahomey, defending its people ruthlessly against kidnappers. The women are a graceful force of nature, tearing apart their enemies ferociously, but they always feel in control and stand by a moral code. Led by General Nanisca (Viola Davis), the Agojie serve at the request of their King Ghezo (John Boyega), a man caught in the delicate balance of caring for his people and preventing all-out war with the Oyo Empire. The kingdom has been selling its captives to the slave trade to avoid war and receive weapons. Nanisca believes there must be a way to maintain the kingdom’s greatness without selling their own people to the Europeans who are increasing their demand.

Davis is a commanding titan in this film, quietly peeling back the hardened layers on Nanisca to reveal more depth to her character as the film progresses. While the title “The Woman King” suggests this is a Viola Davis one-woman show, the ensemble around her is an absolute knockout. Thuso Mbedu delivers a star-making turn as Nawi. A new recruit to the Agojie, Nawi is quite young (19 years old) with a fiery temper and a tendency to disobey orders (even if it’s to protect her fellow warriors). Still, her skills in battle help her shine immediately. After a brilliant turn in Barry Jenkins’s series “The Underground Railroad,” Mbedu proves she’s a force to be reckoned with in her debut feature film role, and her scenes with Davis provide the film’s heart and emotional stakes. Lashana Lynch steals many scenes as Izogie, who trains many of the new members of the Agojie. She’s light on her feet and quick to a snarky comment but becomes a trusted ally for Nawi during her training. Sheila Atim pairs well with Davis as Nanisca’s more reserved right-hand woman, Amenza. It’s rare for a film to be so action-driven yet still give space for many characters to shine, but Agojie is a unit, a team. This is not missed on Gina Gina Prince-Bythewood. The characters may not always get along, but they fight for each other, and that camaraderie and sisterhood is felt in every frame of this emotionally stirring movie. Alongside their phenomenal chemistry, Dana Stevens’ screenplay takes the time to build up unique characters that we genuinely grow to care for, rather than just waiting for the next action sequence to take place.

Outside of the character work and story, “The Woman King” is supremely well-crafted. While most action films these days are filmed on soundstages and parking lots, the action feels lived-in as much of the shoot took place on location with top-notch stunt and fight choreography (the PG-13 rating gets pushed to the max as the bloodless sword fighting is still kept brutal). Gorgeous costumes and production design fill each space with intricate details that look hand-crafted, adding authenticity to a people whose stories we rarely see. Paired with a thrilling Terence Blanchard score, this is an exhilarating viewing experience.

While the Agojie’s fight against the encroaching slavers starts slowly, it quickly ramps up. However, numerous subplots emerge that the screenplay doesn’t have the time to develop fully. Nawi’s budding romance with a mixed-race slaver named Malik (Jordan Bolger) is interesting in theory but never develops into anything above its surface-level intention. Prince-Bythewood’s direction, too, is confident and clear as she never lets the audience get lost, even amid the action sequences. She wisely keeps the action focused on the characters after carefully developing them, so by the time we get to the third climatic act, there’s a whole level of investment in not just the Agojie as a group but each individual character. These women kick serious ass and are just as tough as any man they face.

The comparisons to “Braveheart” and “Gladiator” weren’t simply because of the genre in which “The Woman King” takes place, that of the historical sword action epic. It may use the same well-worn structure, mixing coming-of-age drama with rousing battles against tyranny and oppression. While the story feels familiar, the perspective from which it is told is entirely fresh, making for a rare character-driven action epic that’s exhilarating and wholly unique in today’s cinematic landscape. Hopefully, it will open up more doors and opportunities for other new stories to be told so that Black empowerment, instead of Black trauma, can become the norm in Hollywood storytelling.