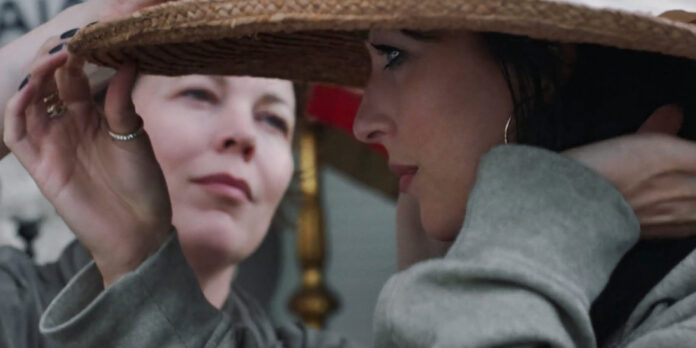 THE STORY – Alone on a seaside vacation, Leda becomes consumed with a young mother and daughter as she watches them on the beach. Unnerved by their compelling relationship, (and their raucous and menacing extended family), Leda is overwhelmed by her own memories of the terror, confusion, and intensity of early motherhood. An impulsive act shocks Leda into the strange and ominous world of her own mind, where she is forced to face the unconventional choices she made as a young mother and their consequences.​

​​One of the joys of watching a film is discovering something being cemented on celluloid that is rarely discussed but experienced by many. In “The Lost Daughter,” director Maggie Gyllenhaal makes an impressive feature directorial debut with a film that explores some of the unmentionable and under-discussed aspects of motherhood. Helping with this lofty task is Olivia Colman in a role of extreme emotional command and pure presence. Watching her ascend to the heights of being an esteemed, lauded actress over the past few years has been thrilling, and in this film, she may just deliver her best performance to date.

Colman plays Leda, a professor alone on holiday. While trying to get some rest and relaxation, she finds herself enmeshed in the lives of a group of fellow vacationers, including a young mother named Nina (Dakota Johnson). Leda and Nina have a lot more in common as mothers than initially meets the eye. As she observes Nina interact with her young daughter, Leda reflects on her own experience raising her two now-grown daughters. These memories are made real in flashback sequences where Jessie Buckley plays a younger Leda.

While it may sound like a low-stakes story, the film maintains a level of surprising unease and tension throughout. Gyllenhaal has a seemingly natural ability to navigate the problematic tones of the screenplay without straying into unrealistic melodrama. As the film unfolds, several average, small-scale conflicts arise, which the audience dreadfully awaits to see discovered and brought to light. There’s a fine layer of casual menace running through the film that the characters can brush off. Still, the audience knows it’s worth paying attention to simply because this is a fictional story and, therefore, an essential chapter in the characters’ lives. I was shocked at how stressed I found myself watching this. Sometimes, relatable human conflicts can be more intensely dramatic than the most bombastic war picture. “The Lost Daughter” is precisely one of those films where the battleground is a resort and the soldiers are perfectly average human beings. It’s a thrilling down-to-earth drama.

The screenplay finds new territory to explore when it comes to discussing motherhood and the expectations we place on matriarchs. I don’t think I’ve ever seen the frustrations of parenting portrayed with such non-judgmental accuracy. The pressures, stresses, and unwelcome intrusive thoughts that can often accompany young parents are all on display with unyielding realism. As Leda herself says, she’s an “unnatural mother.” Her residual guilt and regret are captured by Gyllenhaal and brought to life by Colman with full dimension and understanding. Leda is never let off the hook for how she raised her girls, but that’s part of her own doing. She can’t shake the past as much as she wants to. At times the flashback sequences may get a bit repetitive, and the present-day conflicts frustrate in their lack of quick, obvious resolution, but this is often true of life, and Leda clearly has a habit of not always choosing the easiest option for herself. Even though her life may appear put together on the outside (she has a good job and enough disposable income to be able to travel for an extended period), Gyllenhaal’s subtly unsteady camera reflects Leda’s quiet inner turmoil.

Colman is, frankly, incredible. She brings Leda to staggering life while maintaining some of her trademark, real-life charm in a way that only further fleshes out the character. Colman can play someone wishing to brush off and look away from difficult emotions better than anyone. The command of her expressions and externalization of inner tribulations is masterful. She has such a huge smile that she constantly flashes while insisting, despite what other characters might say, that she’s fine. But her wildly expressive eyes betray what Leda is really feeling. She’s in nearly every scene, and she manages to find variety in all of them. It’s a truly incandescent, stunning performance. Johnson is also wonderful as the new parent to whom Leda finds herself strangely drawn. She truthfully portrays a frustrated young mother who’s having trouble seeing past her current parenting difficulties.

“The Lost Daughter” is a character drama that achieves what the best films strive to do: it effectively unearths a typical human experience that many are content to keep buried. Everyone knows that motherhood is difficult; this film shows how it has the potential to be unbearable. The fact that society doesn’t like to discuss such things only makes it more upsetting for those experiencing these feelings when they do come to the surface.