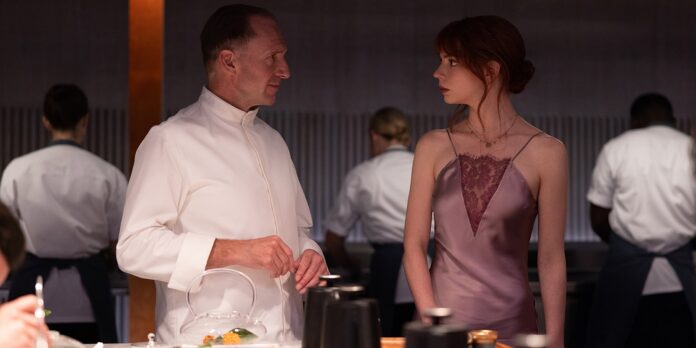 THE STORY – A young couple travel to a remote island to eat at an exclusive restaurant where the chef has prepared a lavish menu, with some shocking surprises.
​
THE CAST – Ralph Fiennes, Anya Taylor-Joy, Nicholas Hoult, Hong Chau, Janet McTeer, Judith Light & John Leguizamo

The words “Yes, Chef” are reverberating in the culinary world. The phrase is a form of reassurance between a kitchen team and their leader to ensure every single staff member is on the same page of meal execution up until the moment a dish is served. Perfect execution takes precision. The process is painstaking at times, even frightful as stress levels soar in pressure cooker environments. The burden for a meal to become more than “just food” haunts Chef Slowik (Ralph Fiennes) in Mark Mylod’s wickedly entertaining thriller “The Menu.” At the esteemed Chef’s restaurant Hawthorne, a sleek and mysterious-looking structure located on a remote island, the heat is on to craft a culinary experience that will shock and awe for one special evening. As wealthy guests arrive for the lavish meal, among them young couple Margot (Anya Taylor-Joy) and Tyler (Nicholas Hoult), you get the first taste of intrigue about who has a dinner invite and why. Slowik’s right-hand woman Elsa (Hong Chau), greets each guest with meticulous composure and an amusing bluntness. As she gives them a tour of the premises, anticipation gnaws for what sort of fine dining experience the staff at Hawthorne have cooked up. “The Menu” is not just an appetizer but a wholly satisfying meal you’ll want to savor every twisted last bite of.

Mark Mylod turns the phrase “Yes, Chef!” into a frenzied chant. It echoes with an obligation to fulfill Slowik’s obsessive desire for high-end conceptual dining. The menu is more than the food. Hawthorne stands to give guests an unforgettable meal not simply to eat but to savor, relish, and digest with pleasure. That is the principle Slowik swears by; he not only executes experiential meal concepts for each course but takes into consideration the people he and his staff are serving. He knows each and every one of the guests invited to this fancy dinner—all except for one, whose presence puts a wrench in an otherwise carefully planned full-course meal. The most astonishing ingredient of Mylod’s storytelling is how the film visually feels like a lavish menu come to life. Each course gets a vivid title card, complete with delicious food close-ups and frequently amusing menu item descriptions that play on developing plot points in the story. The technical precision, from lavish cinematography and production design to exquisite art direction and set decoration, would be up to par with Slowik’s finely tuned expectations of perfection if he had a say.

Like any truly good and memorable dish, the taste is just one element. The emotions mixed into the preparation of a dish play a strong role in how any given person experiences it. How much is enough to truly satisfy your guests in the food service industry? What will it take to reach the glow of fulfilling everyone’s taste buds? “The Menu” is a heightened play on ultimate satisfaction with the kitchen on the receiving end. By turning customer satisfaction on its head, screenwriters Seth Reiss and Will Tracy push the idea of a fine dining experience to horror-fueled extremes. Chef Slowik’s deranged approach to culinary arts keeps the story fresh and unpredictable. The concept is fully realized and alive, swirling in a fun balance of thrills and chills. With a consistent tone that leans into the realm of dark comedy, hearty laughs come and go in equal measure.

The film also satisfies with one of the year’s best ensembles, featuring Ralph Fiennes in the most entertaining role of the bunch. His commanding screen presence is an ideal fit for Chef Slowik’s uncompromising and intense disposition. In keeping with the film’s dark humor, Fiennes’ comedic abilities shine bright through the character’s scorching one-liners, which singlehandedly cut through the nonsense of his wealthy customers’ problems. In addition, Anya Taylor-Joy can now add “The Menu” to her repertoire of horror-fueled storytelling with another compelling performance. She, too, has a commanding presence that gives her character a mysterious edge. Taylor-Joy and Fiennes together are a match made in culinary hell. Nicholas Hoult, John Leguizamo, and Janet McTeer shine among a stacked supporting cast, but the biggest standout here is Hong Chau. From the moment Chau appears on screen as Elsa, she captivates your attention. You want to follow this character and study her every move and concealed expression in the hopes of raising the curtain on Hawthorne. Her deadpan delivery and chemistry with the cast are a pleasure to watch.

“The Menu” is made with a love for satisfying storytelling. Impassioned direction, a tremendous cast, and outstanding technical prowess are the garnish sprinkled over layered themes at the core. One of the more fascinating layers is the underlying sense of community among kitchen staff, whether current or former. The fact that Chef Slowik is able to recognize people who have worked in the service industry in spite of never meeting them previously is a welcome nod to kinship. There is a mutual understanding in knowing what the inside of a pressure cooker environment looks and feels like when the expectation is to satisfy everyone. The film plays on that kinship in the final act, where the dynamics shift, particularly between two central characters, on a gratifying level. Much of “The Menu” explores gratification, whether from the perspective of appreciation or obsession. Slowik’s guiding principles of eating food – savor, relish, digest – are easy to follow in a film that gives plenty of opportunities to do just that.