“GLASS ONION: A KNIVES OUT MYSTERY” 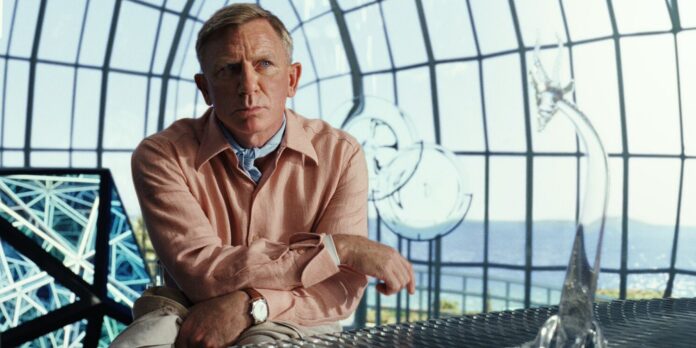 Benoit Blanc is back! It is right in the middle of the pandemic in May of 2020, and the detective hero of 2019’s “Knives Out” is incredibly bored. Reduced to online games of “Among Us” with friends due to the lack of new cases to solve, he jumps at the chance when he gets the delivery of a strange box. That same box has also been sent to five other people: CT governor Claire Debella (Kathryn Hahn), tech genius Lionel Toussaint (Leslie Odom, Jr.), social media maven Birdie Jay (Kate Hudson), and popular manly online streamer Duke Cody (Dave Bautista) all hop on a call to solve the puzzles required to open the box, inside of which is an invitation to a murder mystery party at the Greek island estate of their billionaire tech genius friend Miles Bron (Edward Norton). The last box was sent to Cassandra Brand (Janelle Monáe), once a member of this friend group called “The Disruptors” but currently on the outs. Once everyone has gathered together, it becomes clear that the inclusion of Blanc (Daniel Craig) on the guest list was no accident and that this group of friends might not be so friendly after all.

Writer-director Rian Johnson had a fiendishly fun time paying homage to the works of Agatha Christie in “Knives Out,” one of 2019’s best surprises, and he has returned to that well again, pulling from different examples of the murder mystery queen’s oeuvre just enough so that “Glass Onion: A Knives Out Mystery” (or “Glass Onion” for short) feels like its own thing even though you could easily map certain characters and situations onto pieces of the previous film. No stranger to deepening themes and characters in a sequel to a massively popular film, Johnson has gone much bigger this time around, packing in numerous celebrity cameos, eye-popping production design, and more twists and turns than you could wave a gun at. And somehow, it works. “Glass Onion” is an even more entertaining ride than “Knives Out.” It’s as superbly constructed a mystery as you could possibly ask for, with more riotously funny jokes and the same scathing social commentary as the first. While the obscenely wealthy remain Johnson’s primary target, this time, he delves even deeper into the hypocrisy of the rich and powerful, emphasizing just how much of your soul it costs to become and remain rich and powerful.

Johnson has also assembled a cast that matches the powerhouse ensemble of “Knives Out” beat for beat. Once again, everyone is perfectly cast to character, and all of them are clearly having the time of their lives, including the murderer’s row of unexpected cameos that keep coming even when you think they’re done. Hudson is the most fun of the central performers, fully immersing herself in Birdie’s vapidity and dialing up her reactions to almost camp levels. Hahn is also lots of fun as Claire grows ever more frazzled throughout the film, continually finding new layers of desperation. Craig is once again a hoot and a half as the southern-fried detective who finds himself in over his head, but not in the way he was expecting. But it’s Monáe and Norton who have the juiciest roles as the former business partners on the outs, multifaceted roles that give the performers lots of things to play. Norton is a riot as the tech bro-y patron who prefers faxes to phones, digging ever deeper into the venality of the nouveau riche. Monáe gives a full-on tour de force star turn, carefully peeling back the layers of the most mysterious member of the group.

But as great as the performers are, this is Rian Johnson’s film, through and through. He is so comfortable with the murder mystery genre mechanics that he can essentially have his cake and eat it, too, constructing a great mystery while also spinning it on its head and poking fun at the whole genre. On every single front, “Glass Onion” delivers maximum enjoyment: The sleek cinematography makes the set and costume design pop, the editing allows for some fun visual gags, and the score is inspired pastiche. It’s easy to bemoan that they just don’t make movies as they used to these days, but this is a classic, old-school Hollywood production in the very best way, giving us all the glitz and glamour of an all-star cast in handsomely-appointed, sun-dappled surroundings. Even at two hours and twenty minutes, it flies by because of how entertaining it is. It’s very hard to make a film this thoroughly satisfying and broadly appealing, and it’s hard to make a sequel that lives up to the standard set by the first. Rian Johnson just did both and made it look easy. Johnson has said he wants to make as many of these as Daniel Craig will return for. If this is the level of quality he’s going to continue working at, I can’t imagine anyone complaining.