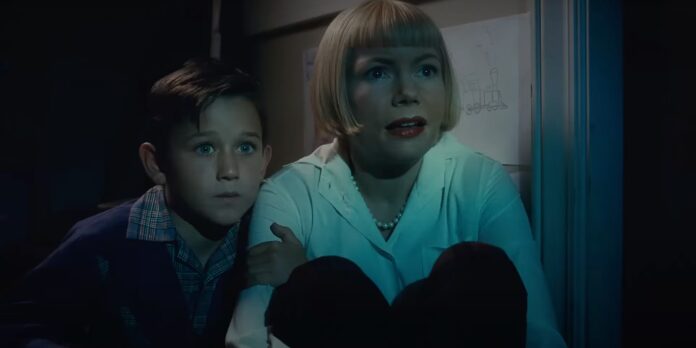 In what is the first of many shocking twists and turns this awards season will surely have, it was announced earlier this afternoon that Universal Pictures plans to campaign Michelle Williams for Best Actress for her role as Mitzi Fabelman, Sammy’s mother (based on director Steven Spielberg’s own mother) in “The Fabelmans.” She was initially considered the frontrunner for Best Supporting Actress but now will face stiffer competition in the lead category against more significant showcase roles for actresses such as Cate Blanchett in “Tar,” Olivia Colman in “Empire of Light” and Michelle Yeoh in “Everything Everywhere All At Once.” What does this mean for both acting races, and was this the right move?

Having seen “The Fabelmans” at its world premiere during the Toronto International Film Festival, I must confess that Michelle Williams’ part is very deserving of Oscar consideration. As a shut-in housewife who is dreaming for some greater purpose in her life (she was once a concert pianist but no more) and who slowly becomes distanced from her husband Burt (played by Paul Dano), Williams goes through a ton of emotions through the film’s two and half hour runtime. Whenever she’s on screen, she makes a lasting impact, whether in her small affectionate scenes with her son Sammy (played by Gabrel LaBelle and Mateo Zoryna Francis-Deford as a younger version) or her bigger emotional outbursts towards Dano at how unhappy her life has slowly become.

Williams had the Best Supporting Actress Oscar on lockdown. She was considered the favorite before the film premiered, and the initial reactions/reviews only solidified her frontrunner status with little to no competition standing in her way. This would be her fifth Oscar nomination and given the film’s popularity, already winning the TIFF Audience Award, and it being the personal telling of Steven Spielberg’s childhood, the sentiment was already in place for Williams to cruise toward an Oscar victory.

Now, there’s significant doubt cast over not only her chances at winning Best Actress but even getting a nomination. Unlike some of the other performers she’s going up against, this is not a showcase role where the focus is primarily on her performances through most of the film’s runtime. “The Fabelmans” is Sammy’s story. Although she makes a significant impression, Mitzi is a character who, like many others in the story, comes and goes in Sammy’s life. Large chunks of the film’s runtime do not feature her, and I struggle to recall if any scenes are even told from her perspective versus Sammy’s.

This is one of those rare cases where the category fraud is being done in reverse. Usually, lead performances contend in Supporting to pick up an easy Oscar nomination or win, but this is so clearly a supporting performance, albeit a baity one with a ton of meaty scenes involving big emotions, crying, yelling and balanced with quieter, more subtle moments of kindness and warmth. The last performance I can think of which managed to win the Oscar for Best Actress after an equally shocking category switch was Olivia Colman for “The Favourite” (many still argue to this day who was lead vs. supporting in that film). Perhaps Universal and Williams feel they can pull off a similar move.

What does this do now to both female acting fields? A spot has clearly opened up in Best Supporting Actress, allowing a new frontrunner to emerge. Will it be either Claire Foy or Jessie Buckley for Sarah Polley’s “Women Talking?” Both have dramatically heavy performances and were the standouts amongst an all-star cast. Or maybe it will be Kerry Condon who manages to go toe-to-toe with Colin Farrell, Brendan Gleeson, and Barry Keoghan in Martin McDonagh’s “The Banshees Of Inisherin.” Janelle Monae absolutely owns every moment of her screentime in Rian Johnson’s “Glass Onion: A Knives Out Mystery” and should’ve been nominated six years ago for her work on “Hidden Figures.” I personally hope this opens up the field for actresses Hong Chau and Stephanie Hsu to find their way into the final lineup for A24’s two films “The Whale” and “Everything Everywhere All At Once,” respectively. Or maybe the new frontrunner hasn’t been seen yet as we still need to see Jean Smart in “Babylon” and the women from “She Said.” Either way, the category has opened up, and that is very exciting.

Best Actress, where Williams will now compete in, is pretty top-heavy at the moment, with Cate Blanchett’s towering performance in Todd Field’s “Tar” leading most of the conversation. She’ll surely be a critics darling this season and will be tough to beat for what many are calling her career-best performance. Then there’s re-occurring favorite (no pun intended) Oscar nominee Olivia Colman for her work as the schizophrenic movie theater manager in Sam Mendes’ “Empire of Light.” Considering what the role affords her and how much she’s been embraced by AMPAS lately, she feels pretty set to be in a final lineup no matter how many mixed reviews the movie around her receives. Then there’s Michelle Yeoh, who is enjoying an incredible career highlight in “Everything Everywhere All At Once.” Surely, AMPAS wouldn’t pass up the opportunity to finally reward someone they’ve neglected in the past, but whose contributions towards cinema have been so respected and adored. Returning Oscar winners Viola Davis (“The Woman King“) and Jennifer Lawrence (“Causeway”) are also in the hunt, along with unseen but much-anticipated work to come from Margot Robbie in Damien Chazelle’s “Babylon,” Naomi Ackie in “I Wanna Dance With Somebody” (Look at screenwriter Anthony McCarten’s track record with getting his leading actors nominated for Oscars) and Danielle Deadwyler for “Till.”

Suffice it to say, the field in Best Actress is more stacked than in Best Supporting Actress, and Williams is going to have a harder time receiving a nomination in a field where each of the above performances (that have been seen) are very much the focal points of their respective films. Maybe the Academy ignores the category placement like they did with Kate Winslet in “The Reader” in 2008 or Lakeith Stanfield for “Judas And The Black Messiah” in 2020. General overall love for “The Fabelmans” could bring Williams along for the ride as a default, name check nominee regardless of how intense the competition becomes. That’s how strong the film already is this early in the Oscar race for Best Picture. However, where before the film had a guaranteed acting win to possibly go with its Best Picture winning Oscar haul, now that win has some doubt cast over it. What are the ramifications for “The Fabelmans” to pull off a Best Picture win if it cannot also have an acting Oscar to go along with it? It might be able to still get on by with a Best Original Screenplay and Best Director win but this raises more interesting questions we’ll have to keep an eye on as the season unfolds.

Please check out our predictions for Best Actress and Best Supporting Actress.