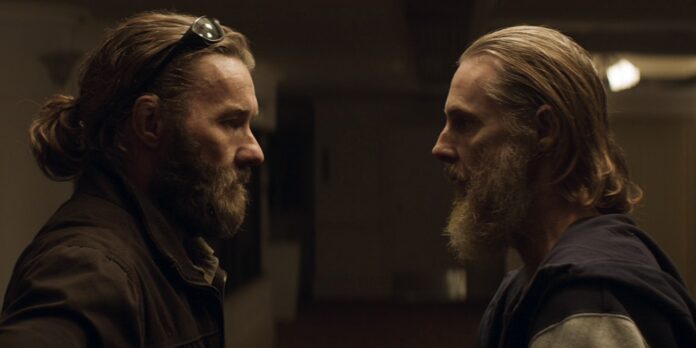 THE STORY – Mark, an undercover cop, forms an intense, intimate relationship with Henry, a murder suspect, in an attempt to earn his trust and get a confession, risking both of their lives in the process.

In 2003, 13-year-old Daniel Morcombe was abducted at a bus stop in Queensland, Australia. The case was known by Australians everywhere – it was one of the most extensively investigated crimes in Queensland’s history – and the way they found the suspect seemed straight out of a movie. Brett Peter Cowan and a man named “Joe” met on a plane one day and hit it off. Over the next few weeks, they chatted and met up. It seemed normal enough, except that Joe was an undercover police officer trying to elicit a confession from Cowan. Eight long years after Morcombe’s disappearance, Cowan was charged with the young boy’s murder and later found guilty.

Thomas M. Wright’s “The Stranger,” which he wrote and directed, draws heavy inspiration from the Morcombe case, as well as Kate Kyriacou’s book “The Sting: The Undercover Operation That Caught Daniel Morcombe’s Killer” (different names are used in the film). Instead of recreating the violence or showing a procedural police drama, Wright focuses on the elaborate, sometimes a bit confusing, undercover operation. It might take some time to fully understand the film’s narrative structure, but once you do, it grows increasingly more intense, all stemming from thoughtful performances by Joel Edgerton and Sean Harris.

For those not familiar with the case, “The Stranger” may be a little confusing to follow at first. Drifter Henry Teague (Harris), who serves as Cowan’s cinematic counterpart, meets loner Paul (Steve Mouzakis) on a bus one night. They bond, get to know one another and seem to be looking for a way to start over in their lives. Paul tells Henry that he’s involved in an organization that takes care of its people as long as they’re truthful and can seemingly wipe their records clean. The idea intrigues Henry, as he previously served time for an assault but states that he “doesn’t do violence.” Based on our first impressions of Henry and the more time we spend with him, he doesn’t seem like someone who could harm anyone, but Wright is keeping the cards close to his chest.

Henry later meets a man named Mark (Edgerton), who picks him up for a job and guarantees that this organization can change his life. You won’t be faulted for not exactly understanding what’s going on or what this organization is, but Wright will slowly reveal all. In the meantime, your thoughts will run wild as you think of what they could be involved in. The pacing here helps add to the growing intrigue surrounding this story, as well as the chilling and unsettling sound work that interjects throughout the film.

It’s hard to pinpoint what kind of man Mark is based on the sometimes awkward interactions he has with Henry, in which Edgerton remains reserved in many of these scenes. We slowly learn more about his personal life, which includes raising a son, having a strained relationship with a former partner, suffering from nightmares, and revealing that he’s an undercover cop. Police consider Henry, whose real name is Peter Worley, the lead suspect in a young boy’s abduction for some time – though it’s not really explained how they identified him – and it’s Mark’s duty to gain his trust and find the truth.

As the two bond over the coming days and weeks, both feel more comfortable opening up to each other, and their performances also loosen up from the quiet men we first meet. And while Henry doesn’t initially seem like a man who could be the lead suspect in this monstrous case, he begins to show us a different side of him, like when he casually mentions the perfect place to dispose of a body to Mark. The further the operation moves, the higher the stakes feel. As the walls close in on Henry, he reveals the true evil he’s been keeping inside for years in the film’s most gripping scene. Mark and his boss listen as Henry recounts unsettling details of that fateful day while the visuals pivot from our point of view to secretly recorded footage. Even though it’s tough to listen to, Harris makes it hard for you not to pay attention to his every word.

The editing and cinematography in “The Stranger” all work well to play up the dramatic, cold, dark, and terrifying elements of this case and further pique viewers’ interest. But most disturbing of all is knowing Morcombe’s story and how his life was taken in such an abhorrent way. “The Stranger” reminds us that sometimes the most horrifying stories are the ones found in reality, not on the big screen or in the pages of a book.