“ONE NIGHT IN MIAMI…” 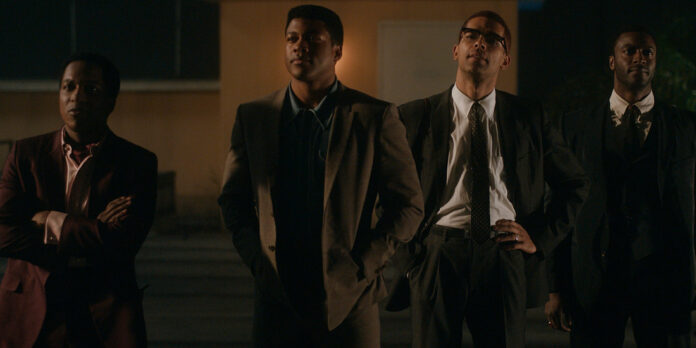 THE STORY – One Night in Miami… is a fictional account of one incredible night where icons Muhammad Ali, Malcolm X, Sam Cooke, and Jim Brown gathered discussing their roles in the civil rights movement and cultural upheaval of the 60s.

​​​​​​Miami, 1964. Cassius Clay has just become the heavyweight champion of the world. Football legend Jim Brown was the one commentating during the match. Musician Sam Cooke and activist Malcolm X cheered on their friend from the audience. Afterward, the four men meet in a hotel room to discuss, among other things, Cassius joining the Muslim Brotherhood, which he and Malcolm will be announcing the next day. No one really knows what took place in the room where it all happened, but playwright Kemp Powers has conjured up a wholly believable conversation between these men that Regina King directs with a strong eye and ear for how it resonates in the here and now.

For her feature directorial debut, King has assembled a cast that effortlessly pours themselves into the skin of the men they are tasked with portraying. Kingsley Ben-Adir nails the meatiest role of Malcolm X with a strong, heartfelt performance that stands apart from the iconic portrayal of Denzel Washington while still feeling like the same person. Eli Goree fills out the cocksure braggadocio of Cassius Clay with the genuine pathos of a young man still coming into his own. Leslie Odom, Jr., fresh off the success of “Hamilton” on Disney+, is a natural fit for the honey-smooth Sam Cooke, the coolest cat in the room until he has to display backbone when cornered. Aldis Hodge brings quiet and sturdy authority to the least showy role of Jim Brown, commanding the screen with ease as he brings out the best in one-on-ones with his scene partners. The passion from all four is commendable, but Ben-Adir is the standout, navigating the shifts between the quiet and painfully human scenes with Malcolm’s family and the often fiery outbursts he displays when talking with his brothers. When he frustratedly shouts that “this movement is a struggle… we are fighting for our lives,” you feel the toll the years of hard work and constant threat have taken alongside the bone-deep belief that this is the most necessary work he can possibly do. It is a stunning performance.

While the words of Kemp Powers’s screenplay are indelible both in how they capture a specific moment in time as well as how they reverberate across the decades to the present day, there are some moments where the pace slows down a bit too much for its own good. While the film is constantly involving, the nearly two-hour runtime doesn’t exactly fly by. King does her best to keep things entertaining, making sure to wring every bit of levity she can out of the script, and to keep things moving as the four men split off into different combinations. But it’s still heavy stuff, especially since so much of this conversation is still taking place in 2020, and some of the pauses in the dialogue last long enough for you to really feel the lapse.

Even after more than half a century, this is still a necessary conversation to have. The film’s extended prologue follows each of our four protagonists through a moment in their lives that combine to paint a surprisingly full picture of the many complexities and hypocrisies of American racism in just a few short minutes. The conversation that makes up the bulk of the rest of the film is wide-ranging but touches on all aspects of what it means to be, in the words of the poet, young, gifted, and black. The perspectives of these men are all different, and all of the dialogue feels true to each one of them, never coming across as too arcane or on-the-nose. The elegance of the opening sequence carries through the entire film in King’s direction, which is not flashy directorial work but shows a strong command of character dynamics within the frame.

Tami Reiker’s cinematography includes a recurring motif of overhead shots that mimic Malcolm looking down into his prized camera, a subtle way of showing that the film knows its role in capturing a moment of history for posterity. This “God’s-eye’ view is all the film needs of the perspective of 2020, and it knows it. King’s trust in the material to allow the audience to make their own connections is evident, and in staying out of the way of the script, she allows the performers to make these larger-than-life figures become the real-life men they once were. In doing so, she ensures that “One Night in Miami…” entertains and educates in equal measure, making it one of the most essential films of 2020, and one that is very likely to stand the test of time.