“THE TRIAL OF THE CHICAGO 7” 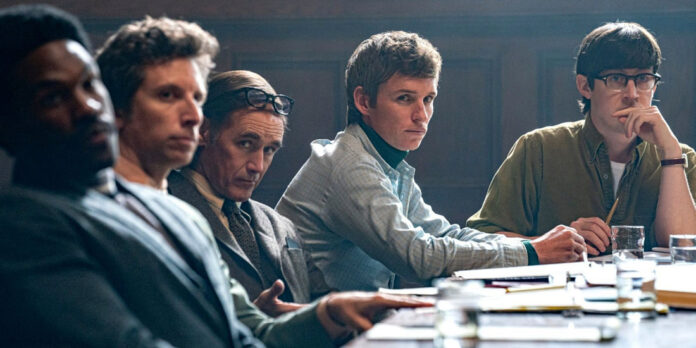 THE STORY – The story of 7 people on trial stemming from various charges surrounding the uprising at the 1968 Democratic National Convention in Chicago, Illinois.

In a year where political turmoil, protesting, police brutality, and systemic racism have been at the forefront of every news story and nearly every conversation we’ve had at our dinner tables, the timing could not be any better for Aaron Sorkin’s latest film “The Trial Of The Chicago 7.” Though it takes place in 1968-1969, the issues which the characters in the film are dealing with are every bit as relevant today as they were back then. Hopefully, everyone who watches “The Trial Of The Chicago 7” will be able to make this connection and realize that enough is enough and actual change needs to take place for the world to get better – a new revolution in 2020.

It’s 1968 and we are deep into the Vietnam War. The country is going through a time of great change with protests happening all over against the war and for civil rights. One such protest took place at the 1968 Democratic National Convention and unfortunately turned into a violent clash between the protestors and the police and National Guard. Organizers of the protest are arrested and the government is angry, seeking an indictment at any cost. What followed, was a wild and infamous trial that got the whole world watching.

“The Trial Of The Chicago 7” is dealing with some heavy topics but how Sorkin presents them feels like something ripped right out of 90s moviemaking. The movie is blunt in its messaging, entertaining in its dialogue, un-showy in its cinematic techniques. It’s primarily focused on one thing: trying to get a reaction out of its audience. Whether its laughs, cheers, or gasps, Sorkin is constantly pushing our buttons and getting us emotionally invested in these characters, their struggle, and the system’s blatant disregard for fairness or human dignity. It’s an effective film as it carefully builds up each of its main characters, letting us in on their quirks and thoughts. But Sorkin does not present his film in a wholly chronological manner. Flashbacks are used throughout to show us what led to the “7” being indicted including the two major protests they were a part of. There is also a ton of cross-cutting which allows editor Alan Baumgarten to not only show off his skills but it also allows such a large story to be told in such a condensed amount of time. Considering the scope of the story and the size of the cast, this could’ve easily been a three-hour-long movie. It’s a testament to Baumgarten’s cutting and Sorkin’s preference for fast-paced dialogue that “The Trial Of The Chicago 7” manages to be just over two hours long. I wouldn’t have minded if it were a bit longer, to be honest, because this is certainly one of the best ensembles of the year and all of them deserve their own feature-length film made about them.

Other than the political relativeness, the biggest talking point of Sorkin’s latest will ultimately be the massive cast of actors he has assembled to tell this story, starting with Eddie Redmayne and Sacha Baron Cohen, as Tom Hayden and Abbie Hoffman respectively. Even though their accents are constantly going in and out during this movie, both are quite successful in conveying their personalities as two political leaders who rally against a government that is failing to not only protect them but protect millions of its people as well. Even though they don’t always see eye to eye on how to combat certain issues, it’s the strength of their political convictions that draws us to them. That level of passion extends to Mark Rylance, who is absolutely excellent playing radical defense attorney William Kunstler, who cannot get a win in this political trial no matter how hard he tries from the despicably unfair Judge Julius Hoffman, played equally as well by Frank Langella. While Joseph Gordon-Levitt may be on the other side of the courtroom as lead prosecutor Richard Schultz, his role is more reserved and straight forward compared to Rylance and Langella. It’s really the battle between these two men in the courtroom that extracts an emotional response from the audience, as Rylance’s Kunstler desperately uses every trick in the law book to give his clients a fair trial from a man who has no intention of doing that. One man that Kunstler is not defending however is Black Panther Party leader Bobby Seale, played by recent Emmy winner Yahya Abdul-Mateen II in a powerful performance that faces the brunt of Judge Hoffman’s cruelty. While it’s hard to argue who steals the show in “The Trial Of The Chicago 7” Yahya Abdul-Mateen II makes a great case for it, even after he disappears from the third act. That’s how memorably good he is. Surprisingly, other recent Emmy winner, Jeremy Strong, does not make as big of an impression as JerryRubin, despite being a welcoming presence on screen. He, John Carroll Lynch (playing David Dellinger), and Michael Keaton (in a way too short but fun role as former U.S. Attorney General Ramsey Clark) each get a significant scene to showcase their talents but their equally strong work gets overshadowed by other the actors I mentioned who have more screentime and larger moments to make a lasting impact. Everyone’s range on this will vary, with various favorites all awards season long and this is just my personal opinion, but there’s one indisputable fact: this is one of the best ensembles of the year.

“The Trial Of The Chicago 7” is a well-done courtroom drama that is a step up from Sorkin’s directorial debut “Molly’s Game” as it attempts to tell a more sweeping story with clear ties to the world we’re living in today. Its old-school filmmaking, courtroom setting, and Sorkin-esque dialogue will remind people of another crowdpleaser he wrote the screenplay for, “A Few Good Men,” which played well to audiences back in 1992 and still gets quoted and discussed to this day. I expect this film to do the same. Sorkin’s latest doesn’t reinvent the wheel but that lack of originality and his desire to keep things simple and to the point is exactly the kind of storytelling which audiences will understand, respond to, and will hopefully bring about the change this country so desperately needs.