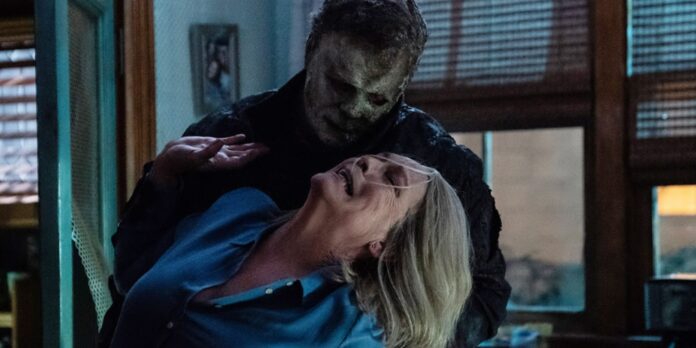 THE STORY – Four years after her last encounter with masked killer Michael Myers, Laurie Strode is living with her granddaughter and trying to finish her memoir. Myers hasn’t been seen since, and Laurie finally decides to liberate herself from rage and fear and embrace life. However, when a young man stands accused of murdering a boy that he was babysitting, it ignites a cascade of violence and terror that forces Laurie to confront the evil she can’t control.

Slasher sequels get a bad rap, as extending a successful, simple formula into new movies is no easy task. Some sequels stick too closely to the formula of the original, making for a dull or unexciting film that doesn’t break any new ground or push the characters forward but instead delivers more of what came before. Many sequels try to take the story in wildly different directions or jump the shark and get far too ridiculous with their plotting, opting for a “more is more” approach. “Halloween Ends” falls somewhere in the middle. Thirteen installments into the “Halloween” franchise, it’s remarkable that “Halloween Ends” manages to have any surprises left up its sleeve at all. The movie is far from perfect and has a lot to live up to, but it’s a satisfying “ending” to the saga of Laurie Strode and Michael Myers that will surely divide fans.

“Halloween Ends” wraps up director David Gordon Green’s trilogy after 2018’s “Halloween” and 2021’s “Halloween Kills.” In the franchise’s timeline, it’s the fourth film, as this trilogy disregarded all other sequels, only counting the events of John Carpenter’s original 1978 “Halloween.” Confusing chronology and titling aside, it’s lovely to have had Jamie Lee Curtis back for this new trilogy of films as Laurie Strode seeks to take down the invincible Michael Myers once and for all. This time, however, Michael may not be alone.

The film opens with the tragic accidental death of a child after babysitter Corey Cunningham (Rohan Campbell) knocks him over a high balcony. In a town already racked with guilt, there’s little Corey can do to avoid being ostracized for the accident. Highlighting Corey’s story so strongly throughout “Halloween Ends” is already quite the departure for this trilogy. Rather than focusing primarily on Laurie or even her granddaughter Allyson (Andi Matichak), Corey’s trauma takes center stage for much of the film, bringing the series in unexpected and exciting directions. It’s difficult to discuss without spoiling the fun of the film, but “Halloween Ends” broadens its scope, begs fascinating questions about Michael Myers, and makes for a genuinely surprising story. Is Michael the embodiment of pure evil, or just a deranged man? Is he a concept, a contagion, an element of fear itself, or merely a person to be feared?

Corey’s story aside, there’s plenty about “Halloween Ends” that’s standard for the slasher genre, and this is primarily what fans want to see. Jump scare fake-outs, brutal kills, and logical leaps that we’re just forced to accept. So much of this finale is about balance, and David Gordon Green strikes that solid balance between giving the audience what’s expected and throwing in some surprises for a franchise that many would be forgiven for thinking had none left to offer. Stylistically, “Halloween Ends” looks gorgeous, just like the previous entries in the trilogy, as it matches the somewhat stark, shadowy visual style of the original “Halloween,” giving it a unique vintage look while counteracting it with a modern flair. John Carpenter also returns as composer, along with Cody Carpenter and Daniel Davies, who melds the classic “Halloween” score with haunting new themes.

Unfortunately, the central selling point of this third and final entry from David Gordon Green, the ending, doesn’t entirely stick the landing. There are plenty of missed opportunities with the story’s new direction for the filmmakers nearly solidified a fresh reinvention for the franchise but went in a slightly more conventional direction. In Laurie’s final confrontation with Michael, some odd choices are meant to land with gravitas but ultimately feel somewhat silly. Still, there are plenty of unpredictable moments in the story, and fun jump scares to keep fans on edge regarding how the final showdown between Laurie Strode and Michael Myers will ultimately end. Curtis’ internalized fear and determination are palpable, helping give root to the story and serving as a satisfying bow for her time playing the iconic Laurie Strode. Regardless of what could’ve been, though, “Halloween Ends” is filled with just enough bold choices to work. While it may not be up there with the best slasher films and may not be as much of a breath of fresh air as 2018’s “Halloween,” “Halloween Ends” is still a damn good time.

<b>THE GOOD - </b>Manages to be fairly inventive while still playing within the tried and true formula we know and love. It's a surprising, over-the-top "ending" that mostly sticks the landing thanks to Jamie Lee Curtis<br><br> <b>THE BAD - </b>There are some missed opportunities along the way, especially toward the end of the movie. While there are creative directions, it's not exactly groundbreaking, and not everything works.<br><br> <b>THE OSCAR PROSPECTS - </b>None<br><br> <b>THE FINAL SCORE - </b>6/10<br><br>"HALLOWEEN ENDS"