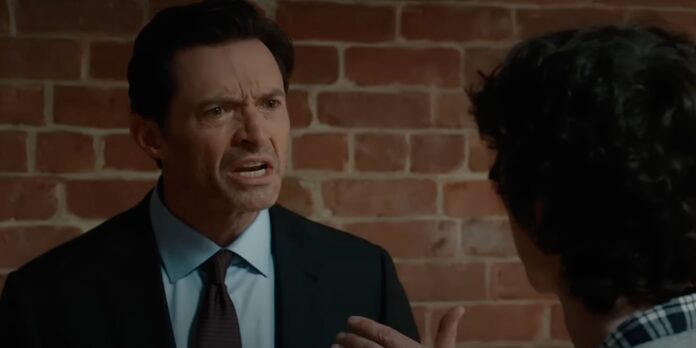 THE STORY – A couple of years after his parents’ divorce, 17-year-old Nicholas no longer feels he can stay with his mother, Kate. He moves in with his father Peter and Peter’s new partner Beth. Juggling work, his and Beth’s new baby, and the offer of his dream job in Washington, Peter tries to care for Nicholas as he wishes his own father had cared for him. But by reaching for the past to correct its mistakes, he loses sight of how to hold onto the Nicholas in the present.
​
THE CAST – Hugh Jackman, Laura Dern, Vanessa Kirby, Zen McGrath, Hugh Quarshie & Anthony Hopkins

At this moment, Nicholas (Zen McGrath) is having a great deal of mental anguish. Once a happy child, the 17-year-old has fallen into a deep funk after the divorce of his parents, Peter (Hugh Jackman) and Kate (Laura Dern), a split prompted by Peter leaving the marriage for his new love Beth (Vanessa Kirby) and siring a child with her. While living with Kate, the teen has been AWOL from school for a month and can only mutter about being bothered by life. In fact, his relationship with his mom has degenerated to the point where Nicholas announces he wants to move in with his dad, and Peter and an apprehensive Beth agree.

So begins “The Son,” Florian Zeller’s second film adaptation of his trilogy of plays and serves as a follow-up to “The Father,” the 2020 film which garnered two Academy Awards. Where “The Father” played tricks on the audience’s mind, “The Son” is a more straight-ahead domestic drama, at least at first. Peter is a high-powered New York executive who is weighing an offer to join a U.S. Senator’s D.C. reelection campaign, but his first priority is his new family, Beth and his baby son Theo. He loves Nicholas but has ceded parenting duties to Kate long ago. So when his ex-wife tells him that she has become genuinely afraid of their son, Peter knows it’s time to step up.

Anxious to grasp this second chance at being a suitable father to Nicholas, Peter reinforces his son’s good behavior at every turn and is delighted when Nicholas starts getting As in school, making friends, and being invited to parties. Or so he’s told. What Beth sees is something else entirely — a kid who’s “weird” whom she is afraid of having around their baby. Still, Peter is determined to give Nicholas the kind of love and attention that his own father, Anthony (Anthony Hopkins), denied Peter throughout his life.

Hopkins has only one scene in “The Son,” but it’s a beauty. On a business trip to D.C., Peter drops by his father’s house ostensibly to tell his father about the troubles his grandson is having. Instead, Peter dredges up long-head resentments he has against Anthony as to how he failed him as a father and how at least Peter cares about his relationship with his son. Anthony pauses, takes his measure as he sharpens his bone-dry scalpel, and calmly proceeds to eviscerate his son and his humblebrag. One hardly needs reminding just how devastating Hopkins can be when he has a target in his sights, and his clipped condescension toward Jackman’s Peter is giggling with delight. Honestly, nobody does it better. Peter, humbled, returns home to prove his father wrong, but when confronted with proof that Nicholas has been lying to him all this time, the long-overdue confrontation must come down, and many harsh truths are at last spoken.

The specter of mental illness is never far away in “The Son.” The particular pain of parents who see the child that they so desperately love is in need of help that they themselves cannot give is one that rings true to too many households, and Zeller and his collaborator Christopher Hampton capture it with skill and empathy in yet another extraordinary script by this Oscar-winning duo.

In directing “The Father,” Zeller had the daunting challenge of maintaining an enclosed, hot-house atmosphere while his script played mind games with the audience. Here, Zeller, though working on the wider canvas of New York City, still must bear down closely to these four people’s individual problems and anxieties, never losing their essential humanity. It’s still hard to believe that this is only Zeller’s second film — his assured direction resembles that of a longtime craftsman.

This is particularly displayed in his skill with actors. Vanessa Kirby, for example, has never been more appealing as she is here — with her combination of warmth and intelligence, you understand entirely why Jackman’s Peter would fall for her. And her scenes where she’s trying to protect her own baby from her suspected fear of Nicholas are riveting. As Kate, Dern has the particular challenge of capturing a woman who is torn between her longtime resentment of the husband who left her and having to work with him to give much-needed help to their troubled son. Dern has more than a few scenes where your heart simply aches for Kate, and Dern never gives too much — always making the audience come to her.

McGrath, the young Australian actor whom Zeller cast over Zoom for the part of Nicholas, has such an intelligent approach here. He never plays Nicholas as some teenage psycho but instead always makes sure we can see glimmers of that little boy whom Peter and Kate delighted in as a child. He allows you to feel Nicholas’ desperation at wanting to reconnect with both of his parents while racing against the clock and the gradual growth of his clinical depression. It’s a delicate tightrope of emotion that McGrath is navigating here and, in the process, delivers a performance that is skillfully calibrated while still being utterly heartbreaking.

In a career that encompasses being a superhero, a dramatic actor, and a song-and-dance man in one unique package, Jackman has never had a role quite like Peter, which calls upon him to shed his everyday good-guy image to probe deeper into the psyche of a successful man whose Achilles heel is his lifelong resentment of his father’s failures and his deep terror that he will make the same mistakes with his disturbed son. Jackman reveals a vulnerability in his performance in a way we have never quite seen before, and when that crack in his protective armor breaks, the result is devastating. It’s brilliant work from him.

For “The Son,” Zeller has brought back many of his crack production team from “The Father,” including editor Yorgos Lamprinos and cinematographer Ben Smithard while adding production designer Simon Bowles and composer Hans Zimmer, who contributes a gloriously melodic score. As with “The Father,” it’s first-class production work all across the board.

Offhand, I can’t think of another project as ambitious as Zeller’s, creating three plays (followed by three films) that probe with such insight the psychological damage that one can casually inflict within a family, even when (or sometimes, especially when) love is involved. The empathy Zeller shows toward his characters, particularly in “The Son,” is a distinguishing mark of his writing and makes me look forward to “The Mother,” the trilogy’s conclusion, should a film ever come to pass.

And to anticipate one likely question: yes, Hugh Jackman does dance in “The Son,” swinging to Tom Jones along with Kirby and McGrath in a joyous family moment that slowly turns dark, as does so much in Florian Zeller’s remarkable sophomore effort.