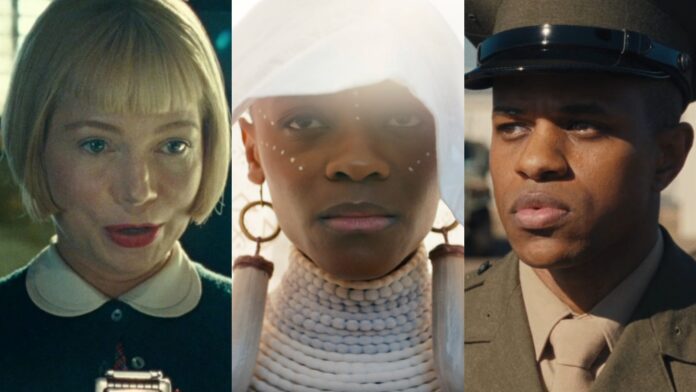 The Awards Audit is a weekly column at Next Best Picture where we dive into the financial performance of this year’s Oscar contenders and analyze how their results impact their prospects for this awards season. With “Glass Onion: A Knives Out Mystery“ out of the theatrical marketplace, an array of award titles performed with mixed results in the post-Thanksgiving period.

Celebrating its fourth weekend at the top spot, “Black Panther: Wakanda Forever” is a slam dunk success for distributor Disney passing over $700 million at the worldwide box office. The latest MCU title is set to pass “Doctor Strange And The Multiverse Of Madness” to become Marvel’s highest-grossing domestic title of the year. Some may say “Black Panther: Wakanda Forever” is not reaching the meteoric heights of its predecessor, but that film’s performance was simply an unfair standard in a post-COVID-19 landscape. All things considered, the latest MCU film has done exactly what it was supposed to do before “Avatar: The Way Of Water” dominates everything in its path starting December 16th.

On the flip side of the coin, “Strange World” is a catastrophic box office bomb for Disney. The film’s apathetic critical/audience reactions and underwhelming marketing campaign prevented the sci-fi adventure from connecting with the masses during the holiday period. Currently, Disney is set to lose over $100 million in what is perhaps their biggest holiday dud in 20 years (2002’s “Treasure Planet” flamed out in its November release). “Strange World’s” negative press and modest reviews will likely prevent it from landing in this year’s competitive Best Animated Feature field (currently ranked 6th by NBP).

Director Steven Spielberg’s much-anticipated passion project, “The Fabelmans,” is one of the season’s most prominent award contenders. NBP is currently projecting the film as the favorite to win Best Picture and Best Director, while nominations for Best Actress contender Michelle Williams (ranked 3rd by NBP), Best Supporting Actor contenders Paul Dano (ranked 4th by NBP) and Judd Hirsch (ranked 5th by NBP), and Best Original Screenplay (ranked 2nd by NBP) seem likely along with a ton of below the line nominations.

Following the film’s so-so nationwide opening, “The Fabelmans” continues to perform with mixed results. A 42% post-holiday weekend drop and $2,036 per theater average are relatively respectful, but it’s clear the title’s glowing critical appraisals aren’t translating into massive profits. I also need help understanding distributor Universal’s decision to announce a video-on-demand release, which is scheduled for December 13th. If the plan was to play the long game with its 600 theater nationwide debut, it makes no sense to cut the film’s legs theatrically so soon after opening.

The big unknown is whether “The Fabelmans’” underwhelming theatrical run will impact its award prospects. The film’s early frontrunner status is no guarantee for Oscar success following several pre-award season favorites, like 2021’s “The Power Of The Dog” and 2018’s “A Star Is Born,” eventually falling out of contention for Best Picture. “The Fabelmans” lack of mainstream success may have opened the door for “Everything Everywhere All At Once” to become the new favorite (it’s currently ranked 2nd by NBP for Best Picture), with “Women Talking” still set to open later this month as another potential challenger. Or perhaps the box office results won’t matter, and “The Fabelmans,” will continue to be the frontrunner until the Oscars? Time will tell.

After losing 906 theaters post-Thanksgiving, “She Said” continued its struggles in attempting to connect with mainstream audiences. I would say the film’s limited financial appeal is not surprising, as journalist titles centered on insider Hollywood culture are not the easiest sell during the holiday season (“Bombshell” faced similar struggles in its 2019 Christmas launch). “She Said” still remains a beloved staple for critical pundits, so the film could score enough association support to bolster its Best Adapted Screenplay (ranked 3rd by NBP) and Best Supporting Actress for Carey Mulligan (ranked 5th by NBP) campaigns.

Financially, both titles were modest performers. “The Inspection’s” vital story on an LGBTQ marine dealing with family and external pressures is drawing limited theatrical support, mainly because the arthouse marketplace is incredibly competitive during the holiday season. Distributor A24 will likely shift its focus to VOD soon enough.

On the other hand, “Spoiler Alert” will be expanding to national markets following its respectable $14,166 per-theater average in 6 theaters. The complete dearth of releases next weekend gives the title a chance to seize some profits, but I expect a gross of $1.5-$3 million at most for the memoir adaptation of entertainment journalist Michael Ausiello’s work.