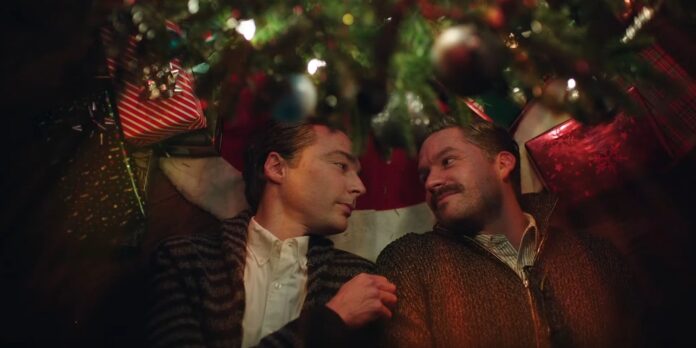 THE STORY – Writer Michael Ausiello embarks on a roller-coaster ride of emotions when his partner gets diagnosed with terminal cancer.

It takes all kinds. There are as many ways to be a person on this planet as there are people. So there’s no real reason to get upset over the whitebread blandness of Michael Showalter’s “Spoiler Alert.” It is, after all, based on a true story whose author was involved in the production, so it’s, at the very least, a mostly accurate representation of the people depicted. And the film’s story – insecure TV writer Michael (Jim Parsons) meets Kit, the photographer boy of his dreams (Ben Aldridge), they hit a rough patch, and then Kit gets terminal cancer – Showalter is successful at wringing the tears one would associate with this type of story. So why, then, is this film’s aggressive heteronormativity and commitment to inoffensiveness so enraging?

“Spoiler Alert” recalls past triumphs of gay cinema like “Jeffrey” and “Longtime Companion”: ’90s tragedies that had to play things a bit safe in order to get distribution and audiences in a time when there weren’t many positive depictions of homosexuals in film or TV, let alone ones in which they were the main characters. The main difference is that here, a character isn’t dying from AIDS but cancer. More than that, it is being released in a world after gay-centric films “The Birdcage” and “Brokeback Mountain” both grossed over $100 million at the box office, and “Will & Grace” saw tens of millions in weekly viewership on TV. This is the year that saw “Bros” and “Fire Island” add unique voices and fresh personalities to the canon of gay cinema and be embraced for it. And here’s “Spoiler Alert,” happy to party like it’s 1999 even though its story largely takes place over a decade later.

The film does at least attempt to do something unique and stylistically interesting: In moments of emotional crisis, Michael flashes back to his younger life as a fat gay child to a single mother, as though it was a sitcom in which he was the star. It’s a nice nod to his profession and how TV has shaped him. Still, it is perhaps telling that these sequences emulate family-values sitcoms like “Full House,” “Home Improvement,” and “Boy Meets World,” shows that felt old-fashioned even when they originally aired. Even when attempting to add some personality and style, “Spoiler Alert” stays as safe and bland as possible.

What mostly keeps the film afloat are the performances. Sally Field and Bill Irwin are lovely as Kit’s parents, providing solid comic relief at first and adding lovely grace notes of sorrow at the end. Parsons is rather charming as Michael, especially endearing when navigating the tricky waters of caring for Kit during a period when they’re living apart (at the advice of their relationship therapist). The film doesn’t shy away from Michael’s less attractive side, and Parsons finds a good balance between those not-so-nice moments and the sweetness necessary to make you feel for him. But it’s Aldridge who is the true star of this film, radiating star power from his first moments onscreen. His megawatt charisma comes through even when Kit’s cancer overtakes him so that no matter how much work the hair and makeup team do to make him look like he’s convincingly on his deathbed, he still has all the gravitational pull of a true movie star. His easy charm and sly sense of humor bring laughter out of even the stalest jokes, and he brings solid gravitas to the more dramatic moments. When he’s not on the screen, you really feel his absence, an absolutely necessary trait for this type of film to work.

Even though the cast does yeoman’s work in making this watchable, the film as a whole feels predictable and stale. It’s impossible to miss the stench of decades-old clichés and well-worn beats throughout the whole endeavor. While there can be some merit to clichés and storytelling tropes when done well, Showalter shows none of the nimbleness he showed with his last feature, the similarly-themed “The Big Sick.” That film was suffused with the personality of its lead, Kumail Nanjiani, who was unafraid to emphasize the specificity of his story in pursuit of finding its universal heart. “Spoiler Alert” has plenty of heart, but its specificity has been sandblasted away, leaving behind one decent Smurfs joke and a few mentions of “RuPaul’s Drag Race,” the most mainstream signifier of modern gay life. The fact that this is about a gay couple is so incidental to the story that it could just as easily have been about a straight couple with almost no changes outside of a scene where Kit comes out to his parents, who accept it almost immediately. Gay couples can be bland, inoffensive, and heteronormative, too. Still, at this point in history, after all the leaps forward that have been made in 2022 alone, it’s hard not to feel like “Spoiler Alert” is a step backward in terms of gay representation onscreen. It’s just a nice story about a nice couple that wants to make you cry. While there is a cozy, warm feeling to the film, instead of making comfort food, Showalter has instead created a film that feels like reheated leftovers: It looks and smells like the real thing, but the taste is a whole lot less flavorful.