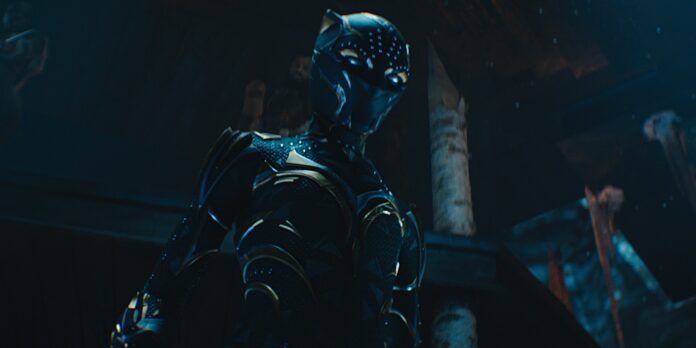 THE STORY – Queen Ramonda, Shuri, M’Baku, Okoye and the Dora Milaje fight to protect their nation from intervening world powers in the wake of King T’Challa’s death. As the Wakandans strive to embrace their next chapter, the heroes must band together with Nakia and Everett Ross to forge a new path for their beloved kingdom.

Ryan Coogler’s “Black Panther” became a cultural phenomenon when it was released in February 2018 and ushered in a new era of representation within the superhero genre on a scale larger than anyone had ever seen before. Very few films come along and change the cinematic landscape, but you could tell the MCU’s first adventure in the fictional African nation of Wakanda was a special one. As the first superhero film nominated for the Academy Award for Best Picture, expectations were already high for Coogler and his team to deliver on the inevitable sequel. Unfortunately, in 2020, tragedy struck when the film’s lead star, Chadwick Boseman, suddenly passed away. With the project and everyone’s lives thrown into disarray, Coogler was forced to go back to the drawing board and find a way to continue the journey of the characters from the first film while respectfully acknowledging Boseman’s absence and living up to the lofty expectations that were thrust upon him. It’s practically a miracle that not only is “Black Panther: Wakanda Forever” a cohesive, worthy sequel with a story that pushes the characters forward in an organic manner and expands upon the world of Wakanda with technical mastery from all departments but it also serves as a moving tribute to an artist and human being who was taken from us far too soon.

An unknown illness has taken T’Challa away from his devoted sister Shuri (Letitia Wright), Queen mother Ramonda (Angela Bassett), former lover Nakia (Lupita Nyong’o), and thousands of Wakandans who acknowledged and respected him as King. A funeral is held in his honor as the world mourns the loss of the Black Panther. A celebration of the life of T’Challa is held where everyone is dressed in white with stunningly lensed photography from cinematographer Autumn Durald Arkapaw capturing the culture’s pain, and admiration expressed vividly through dance and other rituals. The cold open ends, and the familiar opening Marvel Studio logo appears after this hauntingly beautiful opening, all to honor Boseman and the legacy he left behind. We never see him as a body double, re-cast, or re-created using CGI, but his presence lingers over everything else that is to come.

It’s been one year since the death of T’Challa, which has left the kingdom of Wakanda vulnerable for the first time in years. Their most prized resource, vibranium, is being sought after by foreign governments so that they may use it as a weapon to protect themselves from their enemies, both real and perceived. Sources of vibranium are found within the ocean, drawing unwanted attention toward the secret, ancient civilization of Talokan hidden beneath the ocean’s depths. Its leader, Namor (Tenoch Huerta), or “K’uk’ulkan” to his people, is the king of Talokan and is seen by his people as a god due to his ability to fly thanks to the wings on his ankles and possession of superhuman strength and speed. His goal is simple: to protect his people, who, much like Wakanda, are seen as “others” to the surface world and, thus, considered dangerous if discovered. Namor proposes an alliance with Shuri and Queen Ramonda but to do so, they will have to deliver the only scientist who can locate the vibranium directly to him, and he will kill her to ensure his kingdom remains a secret. Searching for a peaceful resolution, Shuri and Queen Ramonda elicit the help of War Dog Nakia (Lupita Nyong’o) and CIA agent Everett Ross (Martin Freeman) to find the scientist (who turns out to be a young MIT student named Riri Williams – played by Dominique Thorne) before Namor, and his formidable Talokan warriors find her first.

Where “Wakanda Forever” succeeds most of all over the first film is in its technical areas. The first film was heavily criticized for its CGI despite every other element from costumes to production design, and its score all receiving praise, including three Academy Awards for their respective categories. Coogler and his team have gone above and beyond to offer far more astounding visual effects work and expand upon the areas where “Black Panther” already excelled in showing us more of the world of Wakanda and introducing the awe-inspiring underwater kingdom of Talokan. With all-new costumes, production design, and a whole culture to establish, Talokan is a fully realized vision from Coogler and his crew as they breathe life into its people, architecture, and way of life, not just through the visuals but also through the film’s soundscape. The Talokan’s use of a sung hypnosis to spellbind their enemies into hurling themselves into the ocean is haunting and effectively incorporated into Ludwig Göransson’s majestic score. Utilizing piercing sonar sounds and a far more epic and exquisite feel than the last film, Göransson’s follow-up to his Award-winning Academy score is bigger, better, and more emotive, especially in how it incorporates songs from the star-studded soundtrack throughout the film, particular Rihanna’s lead single, “Life Me Up,” which serves as a tribute to Boseman.

Without revealing any heavy spoilers, the way Coogler manages to weave multiple characters and storylines through “Wakanda Forever” is commendable as it expands upon themes introduced in the first film and provides meaningful commentary on racial tensions that can exist between different cultures. The performances from the core cast are strong from top to bottom in terms of screen presence and allure. Letitia Wright is given a far more significant role than in the first film and holds the emotional crux of the story on her back as Shuri grapples with the loss of her brother, experiencing grief, despair, and anger. When those feelings turn towards hatred and revenge, it provides a captivating character arc for her, comfortably fitting in with the film’s themes. The other two standouts are Tenoch Huerta and Angela Bassett. The former exudes charisma and expressive depth as an antihero carrying the weight of his heritage and people’s futures on his back, while the latter has some of the most commanding moments of the film. Her big monologue in the Wakandan throne room, where she expresses her wounded rage over how much she’s lost to Danai Gurira’s Okoye (who sadly feels like she has less to do this time around other than kick ass and provide some witty one-liners), is enough to give you goosebumps. She’s an undeniable force in every scene, presenting the regality of her position with power and authority. Like Okoye, Winston Duke’s M’Baku and Michaela Coel’s Aneka are reduced to secondary characters. There are a few bright spots, such as M’Baku making an entrance while eating a carrot (it’s funnier when you see it than reading it) or us knowing Aneka prefers knives to the use of the traditional Dora Milaje’s spear. They all fight well and display moments of strength in the film’s impressively choreographed action sequences, but they don’t have much more to do outside of that.

“Wakanda Forever” has a lot of ground it needs to cover, and at 161 minutes, it represents one of Marvel’s longest films to date. Most of what made the storytelling in “Black Panther” so much better than most of the other Marvel movies was how much it was focused on telling its own story instead of worrying about how the characters would fit into future films and setting up the next adventure. “Wakanda Forever” suffers from this a bit more, as almost all of Ross’ scenes in the movie feel superfluous as they attempt to set up more of what’s to come outside of Coogler’s film and only serve to break up the story’s momentum. The inclusion of Riri Williams almost starts to feel this way as well, especially once her Iron Man-like suit of armor is introduced and you remember that she has a spin-off show called “Ironheart” coming out soon on Disney+, but thankfully, her inclusion feels more necessary, and Williams is a welcome addition, providing grounded comic relief as a teenager caught up in something larger than she could ever anticipate being a part of.

“Black Panther: Wakanda Forever” is a globetrotting story that feels larger in scope compared to the original, with far more refined craftsmanship from all departments (with intelligent use of practical water effects that blend seamlessly with the CGI). With massive expectations, tons of characters to juggle, and a fine line to walk regarding the real-life passing of its former star, Ryan Coogler has somehow found a way to craft a worthy sequel to “Black Panther” that, at times, matches and at other times, even exceeds the original. He has ensured that what was started will continue to help shape, redefine and influence the MCU for generations to come. It’s a thoughtful, moving film with some of the most potent storytelling the MCU has ever seen. It was always going to be a challenge to continue this story without Boseman, but through his legacy, Wakanda, and all it represents, will surely live on forever.