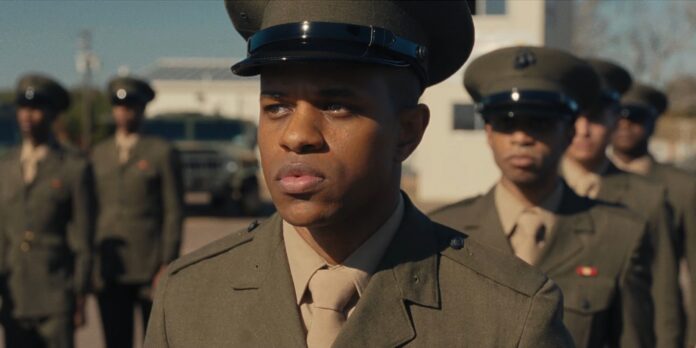 THE STORY – Ellis French enlists in the Marine Corps and ends up at boot camp on Parris Island, South Carolina. He initially meets the physical requirements but is not as successful in disguising his sexual orientation, making him the target of a near-lethal hazing from training instructor Leland Laws and a fellow recruit, Laurence Harvey.

In 2019, writer-director Elegance Bratton’s documentary “Pier Kids” was released. The film takes an immersive look at three LGBTQ homeless youths in New York City who congregate on Christopher St., a haven for homeless queer and trans youth. The subject matter echoes Bratton’s own experience as a gay Black man who, having come out to his mother years ago, was kicked out of the house. A case of art emulating life, Bratton brings an autobiographical story to the screen in his narrative feature debut, “The Inspection.” Told with confidence and heart, “The Inspection” invites conversations around sexuality, masculinity, and community-building in the military world. The story follows young Ellis French (Jeremy Pope), who joins the Marines during the “Don’t ask, don’t tell” era, in which U.S. policy instituted by the Clinton administration prevented gay people from serving openly in the military. Operating in a system designed to discriminate and isolate, Bratton’s feature tells a stirring portrait of individuality and identity.

Ellis French is navigating through an isolating world. After being thrown out of the house by his mother, Inez (Gabrielle Union), he has a limited view of which paths to take that will be societally accepted. Experiencing homelessness, broken family dynamics, and wanting to belong somewhere, Ellis decides to join the Marine Corps. The role of a soldier is defined so clearly; rules and regulations are set. Value is determined by the ability to protect others, which becomes part of Ellis’s narrative. He is searching for validity under the false pretense of camaraderie and “belonging” in an overwhelmingly homophobic environment. He meets characters who reveal themselves to be either an ally or not while navigating the uncertainty of intentions. As the film progresses, the combination of Bratton’s sensitive direction and Pope’s illuminating performance tells a powerful story of self-reclamation.

“The Inspection” is initially dressed as an ill-fated story for its protagonist. The narrative tends to follow a formulaic route, particularly regarding the Marines’ setting. The military genre has seen many stories born from similar environments and circumstances. While not much surprise is to be found in how “The Inspection” plays out, from grueling training montages to intense drill sergeant orders, Bratton finds ways to introduce unexpected elements along the way. Whether it’s the humor instilled in some of the dialogue or the magic realism that establishes a fantasy shower scene, Bratton takes an intriguing approach to bring more of a personality to an incredibly rigid setting. With a sense of conviction, he searches for something to say in a familiar genre while maintaining a personal perspective of queer identity.

While the film is based on a composite of Bratton’s own experiences, Jeremy Pope finds a way to personalize Ellis beyond the character’s circumstances. Instead of simply being a vessel for a person’s life story, the actor digs deep into his character’s interior life. What are his motivations and dreams? How do the dynamics with his mother shape the person he is becoming? Bratton’s retelling of personal experiences shines through Pope, whose performance completely drives the story with astonishing sensitivity and urgency. Pope shares powerful scenes with his on-screen mother, Gabrielle Union, who embodies a personification of conditional love. Ellis’ mother carries darkness inside; she sees her child as disposable, only worthy of “redemption” if he can return home from the military as anything but himself. Union delivers resonating work, and while she doesn’t have as many scenes, the writing of her character lends itself to the core of the film, which Bratton returns to for his protagonist’s reclamation of identity.

From peace and love to authenticity and community, Bratton leans into shining a light on what kids such as Ellis deserved from the beginning. But the film has a disconnect between the exploration of the protagonist’s individuality and the harmful systems that stay in the shadows of the storytelling. While there is a sensitive approach to telling this personal story, there is an underexplored subject of the military-industrial complex and how it takes advantage of so many young men with nowhere else to go but the Marines. Much of the film unfolds in a contained military setting with supporting characters who feel like tropes, leaning into behavioral expectations put in place to move the story from one point to another. For instance, Bokeem Woodbine plays commanding drill sergeant Laws so well, but the writing scratches the surface of this character. Laws reinforces turning men into killing machines who only serve that purpose. There are intriguing throwaway details to Laws’ own experience that the film quickly moves on from. Much of the subject matter is presented at face value and goes underutilized in the bigger picture.

Given how much of the story pulls from different people’s perspectives surrounding the protagonist, it’s more of a detriment to the film trying to get to know underwritten characters. But far more effective elements that work to the film’s benefit outweigh the disappointment. In addition to Pope’s outstanding performance and Bratton’s heartfelt personal storytelling, the technical achievements help create an immersive experience. The music by Animal Collective certainly has its affecting moments; there is a fear to their sound that elevates urgency and intensifies drama on screen. The camera work is tense throughout and, at times, powerfully intimate when exploring vulnerable moments that the protagonist is experiencing.

Even though you get the sense that by the film’s conclusion, Bratton is still searching for what to say, he often returns to a resonating balance of difficult family dynamics and one man’s experience of finding power in what he loves about himself. “The Inspection” is an intense portrait of survival in truthfulness – a narrative feature debut that inspires hope in the face of adversity.