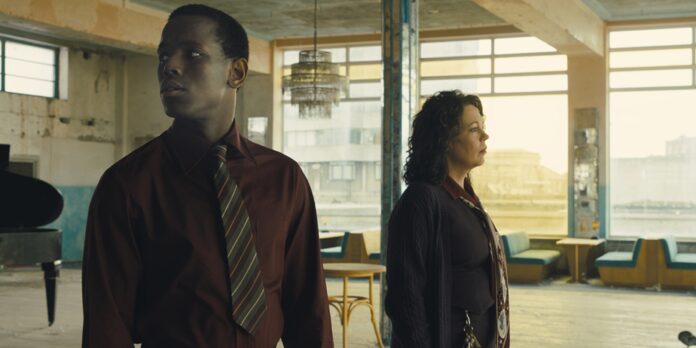 THE STORY – A romance develops in a beautiful old cinema on the south coast of England in the 1980s.

In her awe-inspiring and career-defining AMC theaters ad, Nicole Kidman said it best: “We come to this place for magic.” When the lights begin to dim, and dazzling images play on that huge silver screen, we go to worlds we’ve never been to before and meet heroes and villains who delight, excite and intrigue us until the credits roll. It’s why people have flocked to theaters for decades and hopefully continue to do so in future generations.

Academy Award-winning director Sam Mendes also apparently shares Kidman’s adoration for cinema. He’s the latest filmmaker to attempt a personal film showing his love for movies with “Empire of Light.” But it isn’t quite like Steven Spielberg’s “The Fabelmans” or last year’s “Belfast” by Kenneth Branagh. Instead, “Empire of Light” focuses on the connections found in a movie theater and is almost an ode to overworked concession and box office employees. While the film shines when it focuses on those bonds that form at one such place, it juggles too many storylines and themes. Many plot threads and characters don’t get the attention and time they deserve, leading to less than impactful results.

At the heart of the story is Hilary (Olivia Colman), a single, middle-aged woman who works at the Empire cinema, a beautiful art-deco theater in an English seaside town. She takes her job very seriously – ensuring all the lights are turned on once she arrives, preparing her boss Mr. Ellis’ (Colin Firth) office for the day, and never watching a movie with the customers. There are other responsibilities on her plate – such as sneaking off into her boss’ office for less-than-wanted sexual activities – that likely weren’t noted on her job application. But she doesn’t push away these advances. We learn that Hilary is taking lithium following mental health concerns, and they have made her fairly indifferent to everything and everyone around her. Although she still makes time for dance lessons and laughs with coworkers in the break room.

But when new employee Stephen (Micheal Ward) joins the crew, things change. His tender and curious demeanor enchant Hilary, and the more time they spend together, whether it be exploring closed-off parts of the theater or tending injured birds that have made the space their home, Hilary’s fondness grows, as does Stephen’s. Colman and Ward have lovely chemistry together, but Mendes’ script gives us little insight into why these two would ultimately start a secret fling. They are vastly different in attitudes and goals – Stephan ultimately wants to go to architecture school, while Hilary seems to simply want to make it to the next day without much trouble – and they don’t seem to find much common ground.

Only later does Mendes show that both individuals have to address animosity and challenges in their personal lives. The backdrop of Mendes’ film, set in 1981, is filled with racism and white nationalism, which impacts Stephen on a daily basis. He is rejected from graduate school due to the color of his skin and comes across racist men on the street. Ward tackles his character delicately, but a better script would have fleshed out the role more. Hilary also struggles with her mental illness, which worsens once she stops taking her medication. Colman is a marvel as Hilary unleashes everything that’s been kept buried deep down. In particular, the theater’s premiere of “Chariots of Fire” includes an unhinged poetry reading and an explosive moment with her boss with the words, “To fuck, or not to fuck, that is the question,” uttered.

But all these extra layers to the film don’t get the proper focus that they deserve, leading to a clunky product that’s less than impactful. The strongest parts of the film are when the attention is just on the theater employees, their interactions with each other, and the frustrations of customer service. If Mendes focused his film on the inner workings of the theater, with its climax being the premiere of “Chariots of Fire,” we would have enjoyed a more unique story and highlighted the unsung heroes of the places many of us visit to escape life. Moments like when we see projectionist Norman (played by a wonderful Toby Jones) bring new worlds to life are delightful and masterfully captured by Roger Deakins’ gorgeous cinematography. In fact, Deakins brings so much life to this less-than-bustling theater by illuminating every nook and cranny and making it all look so desirable, including the day-old movie popcorn. Production designer Mark Tildesley also enchants us with the stylish fixtures of this once-booming cinema house that just even walking inside is worth the price of admission.

For all the ways “Empire of Light” stumbles, it manages to stick the landing in its final moments. Hilary, finally making time to sit down and enjoy a movie, is overwhelmed by all those stunning images and sounds in front of her. Colman’s expression, with tears streaming down her face and the happiest smile you’ve ever seen, says it all. This movie could have elicited that kind of response if it had given us a compelling film about this loveable bunch of employees, but Hilary likely would have skipped out on this showing.