“DOCTOR STRANGE IN THE MULTIVERSE OF MADNESS” 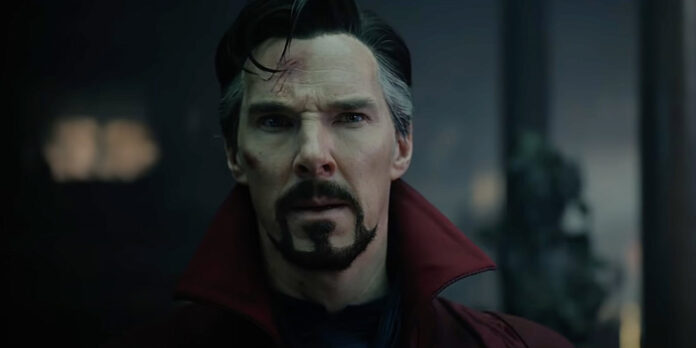 ​Time is broken. Fans of the Marvel Cinematic Universe (MCU) have known this concept for years. After the epic conclusion of “Avengers: Endgame,” fans were interested to see what producer Kevin Feige would do next. His answer: the multiverse, a concept that states that there are an unlimited amount of universes with different versions of the characters we love. Since this announcement, Marvel fans have enjoyed shows like “WandaVision,” “What If,” and “Loki” on Disney+, as well as last year’s feature film and global box office sensation, “Spider-Man: No Way Home,” all centering around alternate realities and the multiverse. They all lead up to this next installment: “Doctor Strange In The Multiverse Of Madness,” and as Stephen Strange (Benedict Cumberbatch) adjusts his broken watch, it becomes obvious: time is broken.

The follow-up to those four entities and 2016’s “Doctor Strange” finds our hero post “Avengers: Endgame.” Now, he is undusted and, as he would state, is perfectly okay and happy with his life. But in fact, he is still reeling from the events of the 2019 film, particularly coming to terms with the results of his actions – mainly the death of Tony Stark, who had to die in order to defeat Thanos. But before he can fully reflect on these feelings, America Chavez (Xochitl Gomez), who has the ability to jump across the multiverse, beams into New York City and states that a monster is hunting her from another universe. Dr. Strange takes her in and asks Wanda Maximoff (Elizabeth Olsen) for help. However, the traumatized avenger has other plans.

“Doctor Strange In The Multiverse Of Madness” serves as director Sam Raimi’s return to the world of Marvel and the big screen in general after his last feature film “Oz The Great And Powerful” nearly a decade ago. Raimi’s Spider-Man movies can be considered the trilogy that started today’s modern fascination with comic-book adaptations, making his return to Marvel and Kevin Feige (who also worked on the trilogy) a lovely full circle event. But a lot has happened since “Spider-Man 3,” for example, there are new technological advances in filmmaking and a new way of engaging with blockbuster films, thus making them more popular than ever before, primarily due to the well-established formula Feige and his team have developed over the years. Since the announcement of his return to the world of superhero blockbusters, the concept of an MCU Sam Raimi film has caused quite a conversation. Raimi, known for his love of horror, practical effects, bright colors, and creative camerawork, doesn’t necessarily fit within what an “MCU film” typically looks like, which is unfortunately evident here. In a world where anything can happen, the possibilities are endless. But it seems that Raimi and the Marvel team couldn’t figure out how to mix their unique approaches. Some sequences showcase Raimi’s touch (mainly any time there is an element of horror introduced), but others are the same old style of a Marvel movie as the two never manage to find a middle ground. Albeit, there are elements where the effects do build upon the fundamentals of “Doctor Strange,” like when Doctor Strange and America jump through the multiverse and some dazzling action sequences. But they are sandwiched around inconsistent CGI, which is constantly battling with Raimi’s preference for a more practical approach.

When it comes to the horror genre flourishes Raimi deploys, the film shines, particularly concerning the story of Doctor Strange and Wanda Maximoff, who has claimed her destiny as The Scarlet Witch. Raimi, who has a foundation in practical DIY horror, excels in this avenue by fully appreciating and embracing the genre elements. The film is often gruesome and scary, filled with monsters, blood, and jump scares. It is as frightening and bloody as a PG-13 Marvel film can be. At times, it resembles a slasher film as opposed to a superhero movie, where no one is safe. Most of that terror comes from Olsen as Scarlet Witch, who is adamant about finding a universe where her children exist.

This is Olsen’s sixth MCU project as Wanda Maximoff (not including the post-credit scene from “Captain America: The Winter Soldier”). For most of these entities, Wanda has been a supporting player behind the likes of other Avengers. Last year’s “WandaVision,” was the first time she took center stage and, by the end, stepped into her power and became The Scarlet Witch. Here, Olsen fully embraces this natural step of the character, who has been supporting Avenger after Avenger and has received nothing but hurt and trauma in return. Wanda is justifiably angry and ready to take what she believes is hers. As an audience member, you understand her motives, even if she is technically a villain in this entry. Consumed by her grief and pain, Wanda has become a monster who will not stop. And Olsen shines as the Scarlet Witch that we have been waiting for. The film may be titled “Doctor Strange In The Multiverse Of Madness,” but this is equally Wanda’s movie, and Olsen is fantastic and luminous as The Scarlet Witch.

It has been six years since Cumberbatch’s Doctor Strange helmed his own movie, who has since reprised the character in ensemble-based films, but like Olsen, was serving a greater story. It was refreshing to see him in the lead again and reflect on the character’s post- “Avengers: Endgame” struggles. Cumberbatch is a perfect Doctor Strange, and it is a joy to watch him in the role. Rachel McAdams also reprises her role as Christine, who is a delight but, unfortunately, doesn’t have much to do other than function as Strange’s love interest again. Newcomer Xochitl Gomez is charming as a young America who carries herself with ease and grace against the Marvel giants of Cumberbatch and Olsen, and as usual, Benedict Wong steals every scene he is in as the sarcastic but lovable Wong.

Granted, this is still a Marvel movie, so there are the standard jokes, formulaic action sequences, elements that exist purely for fan service that does not advance the story (although it is not as evident here as it was in “Spider-Man: No Way Home“), and visuals that an experienced audience member will recognize. General audiences and longtime MCU fans will welcome these familiar components with warmth, but others will see that a major corporation has, once again, muted another artist’s creative style. Such a clash in vision makes “Doctor Strange In The Multiverse Of Madness” indeed madness for better and worse. Even though Raimi’s artistic voice can sometimes be felt, it is only felt at specific points in the film. There is balance with its many different genres, and you have to respect the creative swings the film takes in its overall presentation, making this the closest any MCU film has ever come to the horror genre. The acting across the board, especially from Olsen, is stellar. But some elements of the story, particularly Wanda’s arc, seem to be rooted in her gender, which only puts the character at a disservice and makes you wonder if the MCU has a problem with how they portray women. Yes, time is certainly broken in the MCU, but there may be other things that are also broken.