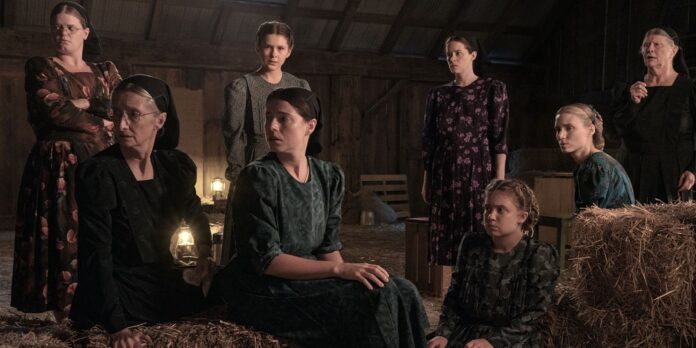 The initial shockwaves of former Best Supporting Actress lock Michelle Williams moving into Best Actress focused on the acting races instead of Best Picture. Yet there is not only a chance “The Fabelmans” cost itself both Best Picture and an acting win with this move, but that “Women Talking” is a step away from Best Picture itself – if it keeps leading Best Adapted Screenplay by near default, and if both Claire Foy or Jessie Buckley are indeed the new Best Supporting Actress frontrunners.

Barring any more category shockers – like Margot Robbie moving into Supporting, for instance – “Women Talking” could be the leader in two major categories for quite a while. In that scenario, it can envision itself winning for Best Picture, an acting category, and in screenplay like past recent winners “Moonlight,” “Green Book,” and “CODA” without needing Sarah Polley to win or even get nominated in Best Director as well.

As long as Williams was the overwhelming favorite in Supporting Actress, this path was set to be closed off entirely for “Women Talking.” Although both Foy and Buckley were pegged as potential nominees since their first screening in Telluride, they were mainly considered Williams’ most likely runners-up until her big shift. Now that she’s gone for the moment, they are now the new 1-2 in the category – regardless of which one is 1 or 2 – until further notice.

“Women Talking” may only have a stranglehold on Best Supporting Actress right now because it is hard to envision anyone else winning for the moment. In a way, that is exactly how it is holding a presumed lead in Adapted Screenplay right now because it is hard to imagine who else could win instead – though that is because of a presumably weak field. Since most every other Oscar favorite is crowded into Original Screenplay, and since the other projected Adapted contenders are Best Picture bubble films like “The Whale,” “Glass Onion: A Knives Out Mystery,” “She Said,” and “White Noise,” it has put a far more solid contender like “Women Talking” leaps and bounds ahead.

Ironically enough, “Women Talking” is as much of a supposed lock-in Adapted as Williams used to be in Supporting Actress. But because Williams was assumed so far ahead, it appeared to cut off the movie’s best hope at another above-the-line victory. While Ben Whishaw could well get into Best Supporting Actor, that category is expected to have Ke Huy Quan, Brendan Gleeson, Brad Pitt, and at least one of “The Fabelmans” supporting men battle it out for victory there. And while Polley is undoubtedly the best hope for a third consecutive female Best Director winner, lingering nitpicks about her visual style and the early frontrunner status of Steven Spielberg and Damien Chazelle have made her the third option at best so far.

Between all of that, it looked like the highest Oscar ceiling for “Women Talking” would be a collective victory in Best Adapted Screenplay until Williams stepped out of Foy and Buckley’s way. Now all of a sudden, the film has two potential easy above-the-line wins right there for the taking, which would either make it the Best Picture favorite or put it very, very close.

The likes of “The Fabelmans,” “Babylon,” “Everything Everywhere All at Once,” and “The Banshees of Inisherin” can also get two above-the-line Oscars before Best Picture too. But they could also all cancel themselves out in categories like Best Director, Best Supporting Actor, and Best Original Screenplay instead. “Women Talking” has none of those films to worry about in Adapted Screenplay, and if necessary, could more easily hold off “The Banshees of Inisherin’s” Kerry Condon, “Everything Everywhere All at Once’s” Stephanie Hsu, or “Babylon’s” Jean Smart better than it could have handled Williams. Robbie might well be another matter, but if she stays in Lead, that would be just one more break for Foy and Buckley if not the decisive one.

Two above-the-line Oscars didn’t yield a Best Picture win for “The Father” in 2020, “Three Billboards Outside Ebbing, Missouri” in 2017, “La La Land” or “Manchester By The Sea” in 2016, “The Revenant” in 2015, “Dallas Buyers Club” in 2013, “Django Unchained” in 2012 or “The Fighter” in 2010. Yet most of those films clearly finished in the top two or three and were serious threats right to the end. As such, while “The Fabelmans” and “Babylon” are widely considered 1-2 in some order, “Women Talking” has to be either 1 or 2 as long as it controls both Best Supporting Actress and Best Adapted Screenplay. Until or unless Robbie goes into Supporting, that probably won’t change for a very long while.

And yet, while it seems to have an easy path in a supporting and screenplay category, there is just as easy a path where it could get tripped up at the end in both, as “The Power of the Dog” did just last year. It dominated the early awards for both Kodi Smit-McPhee in Best Supporting Actor and Jane Campion in Best Adapted Screenplay – yet when “CODA” caught it in both at the end of the season, it was doomed for Best Picture and had to ‘settle’ for Campion winning Best Director only.

Obviously, “Women Talking” can be called “The Power of the Dog” of 2021 because it is the leading Oscar film from a female director. But “The Power of the Dog” was the most critically acclaimed film of the 2021 film festivals – if a bit by default – and went on to be the Oscar frontrunner until the final weeks. Yet when “CODA” made its historic surge and proved it was the easiest to love film among Academy voters, “The Power of the Dog” was exposed as a film voters mainly liked more than loved. Clearly, most of the love they had was reserved for Campion when she swept Best Director, if not ultimately Adapted too.

“Women Talking” is not quite the most acclaimed festival film of 2022, though it had far stronger challengers to contend with. Like “The Power of the Dog,” it may be the kind of gritty, thematically heavy, and perhaps easier to admire than fully love the film that cleans up in critic awards but struggles more with the industry. In that case, maybe the extent of industry voters’ passion for it will be a passion to honor Polley as they did for Campion last year – only in Best Adapted Screenplay instead of Best Director.

This seemed like the most apparent Oscar path for “Women Talking” until Williams opened up Supporting Actress for Foy and Buckley. Now it clearly leads both a supporting acting category and the Adapted category, but will it go the way of “The Power of the Dog” and get caught in both by broader, more easily adored underdogs? That will be simpler to answer once some emerge in both, but it is hard at the moment to see a “CODA” like rally from anyone in either category, though no one saw “CODA” coming at this time last year either.

Right now, Adapted looks too weak for anyone else to win – but it looked even weaker at this time last year when “The Power of the Dog” seemed to tower over everyone. And until either Foy or Buckley pull ahead as the new de facto early Supporting Actress leader, it is hard to judge if either one will stay on top longer than Smit-McPhee ultimately did. But if both Williams and Robbie aren’t in this field, and if “Women Talking” slips up enough for Foy and Buckley to tumble, who could possibly be left then?

Maybe the next in line would be Condon, as either a collective victory for “The Banshees of Inisherin” or its final piece of the puzzle to win Best Picture. If there is something that could ride a “CODA” like surge to topple “Women Talking” in both supporting and adapted, it would have to be “The Whale” with Hong Chau or Sadie Sink, “Glass Onion: A Knives Out Mystery” with Janelle Monae, or “She Said” with any number of potential supporting breakouts. Anything else seems particularly unlikely, especially since festival pans for “The Son” have likely taken Laura Dern, Vanessa Kirby, and its script down with it, and “The Woman King” has a long way to go to get Thuso Mbedu, Lashana Lynch and its screenplay into contention.

At this current moment, there is no doubt “Women Talking” has a far more achievable path to Best Picture than it did a mere week ago. Unless there’s another game-changing shift from Robbie or someone else, “Women Talking” could well be closer to winning than “The Fabelmans,” “Babylon,” “Everything Everywhere All at Once,” “The Banshees of Inisherin” or any surprise contender, and it might stay that way much of the season – or until any other Supporting Actress and Adapted contenders actually look capable of winning. But as very recent history proves, one film isn’t always unbeatable in multiple significant categories all season, even if it seems unbeatable most of the way.

Please take a look at the Next Best Picture team’s Oscar predictions here.