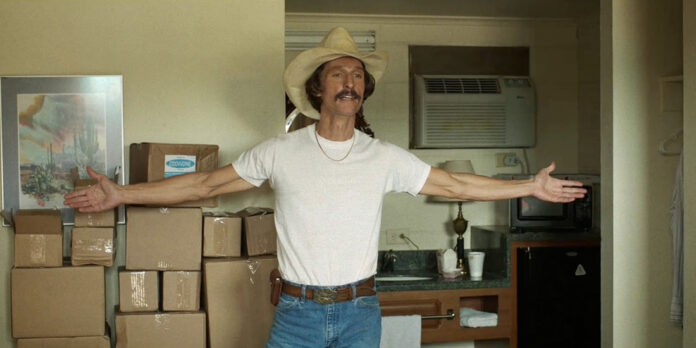 THE STORY – In mid-1980s Texas, electrician Ron Woodroof (Matthew McConaughey) is stunned to learn that he has AIDS. Though told that he has just 30 days left to live, Woodroof refuses to give in to despair. He seeks out alternative therapies and smuggles unapproved drugs into the U.S. from wherever he can find them. Woodroof joins forces with a fellow AIDS patient (Jared Leto) and begins selling the treatments to the growing number of people who can’t wait for the medical establishment to save them.

​Few actors have had an ever-changing career, quite like Matthew McConaughey. You might see him dancing on stage with barely any clothing on. You might find him traveling through space to find a new home for humanity. You might even catch him hanging outside a popular teenage spot and introducing the world to an iconic catchphrase. Whatever the role, we see him expand his horizons and prove that he’s a chameleon that can fit in just about anywhere.

That power to shine comes to a career-best in “Dallas Buyers Club,” where McConaughey plays hard-living, heavy-drinking, homophobic Texas rodeo bull rider, and electrician Ron Woodroof. He parties hard, has unprotected sex every chance he gets, and doesn’t hold back on his ignorance. One day in 1985, when Ron finds himself in the hospital, Drs. Eve Saks and Sevard (played by Jennifer Garner and Denis O’Hare, respectively) inform him he has HIV and 30 days left to live. At this time in history, HIV was a death sentence, and so little information was known. Ron is initially in denial, saying only gay men (though he used a homophobic slur) contract the disease but soon realizes that the diagnosis is true.

Coming to terms with it all, Ron begins researching what medications and treatments are out there, only to find that the drug AZT is in a clinical trial stage. His research leads him to a “doctor” in Mexico, who tells him about various drugs and vitamins that might help him. Ron begins smuggling these drugs into the United States, even though they’re not approved by the U.S. Food and Drug Administration, to use himself and later to sell to other HIV/AIDS patients. Through this hustle, known as the Dallas Buyers Club, he forms a friendship with Rayon (Jared Leto), a trans woman with HIV/AIDS, and connects Ron to other patients. As their clientele list grows, FDA officials and Dr. Sevard make it their mission to shut down the operation, even though the medication seems to be helping many, including Ron, who ends up living long past 30 days.

“Dallas Buyers Club” does a very good job of capturing the AIDS crisis in the 1980s in several ways. Men and women all over Dallas, and the world, were getting sick, and there was next to little medication they could take. Everything essentially depended upon the AZT clinical trials, which didn’t produce promising results at the time and added to even more fear among those diagnosed with HIV/AIDS. The film shows how people were desperate to find something, anything, out there that could help them, even if it included making enemies with the government. It even captures the stigma, misconceptions of homosexuality, and how ostracizing the diagnosis was for many — Ron’s views on homosexuality; Ron losing friends, his job, and home because they think he contracted HIV through gay sex; and Rayon’s estranged relationship with her father. Jean-Marc Vallée’s directing style, which includes shooting the movie handheld and utilizing natural light, also makes everything look and feel very authentic. It all helps put audiences back in this time and understand the emotions running high.

The highlight of this film truly is McConaughey’s performance. He captures every essence of this redneck in his soul — his hatred toward others, his hard lifestyle, his scheming mind, and later his desire to help people in need. He’s a complicated character to like, but we see him go on quite a character-building journey throughout the film, and though we may still not think of him as our hero, in the end, we do have to admit he put up a hell of a fight for those who needed it the most. Not to mention, McConaughey lost an extreme amount of weight for the role to really make it look like he was just days away from taking his final breath. The commitment and passion were there from the start, and it’s no wonder why he snagged the Best Actor Oscar at the 2013 Academy Awards.

Leto’s casting and win, however, are harder to swallow. He delivers an emotional performance — the scene where Rayon confronts her father and tells him about her diagnosis is genuinely heartbreaking — but this role should have gone to a trans woman. A trans woman playing a trans woman should have been a no-brainer, and the role of Rayon would have been elevated and given more depth with someone who could relate to her struggles. When director Jean-Marc Vallée was asked about casting a trans person, he claimed he “don’t know one” trans actor and “didn’t even think about it.” He continued: “I never thought of hiring a real rodeo guy to play the rodeo, Ron Woodruff. And just like in every film — we’re actors, we’re directors. I’m not aiming for the real thing. I’m aiming for an experienced actor who wants to portray the thing.” This is basically saying Black actors should not play black figures, Asian actors should not play Asian figures, etc. We, however, know that’s further from the truth. Hopefully, this casting serves as a reminder to look for talent who should, and need to be, playing these roles and telling their stories.

“Dallas Buyers Club” ultimately tells a compelling story through its as near authentic as possible look at the AIDS crisis in the 1980s. And though he may look different in this film, McConaughey stands tall and gives us a tour de force performance. Its problematic casting of Jared Leto and its questionable writing choices have brought some deserved criticism over the years. Still, there’s no denying how well the film works on a broad level and why it achieved the success it did.