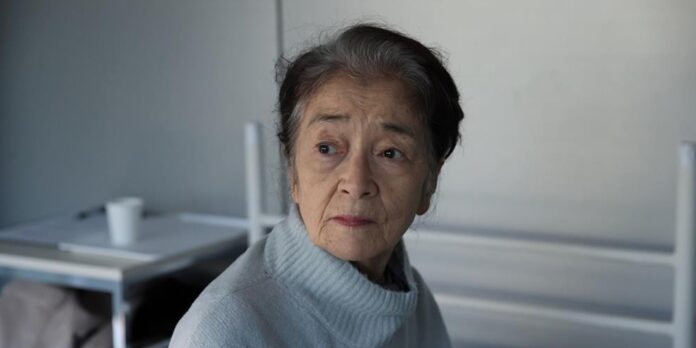 THE STORY – Government program Plan 75 encourages senior citizens to be euthanized to remedy an aged society. An elderly woman whose means of survival are vanishing, a pragmatic Plan 75 salesman, and a Filipino laborer face choices of life and death.

In a world just a small sidestep from our own, Japan has become the oldest nation in the world. The life expectancy of its citizens has gotten so high that people are both living and working longer than ever before. In response, the Japanese government has instituted a program called “Plan 75”. Once you reach 75 years of age, you can apply to be a part of the plan, which will provide you with a stipend of 100,000 yen to use however you want before the appointed time when you go to a facility where the government provides you with euthanasia services. Chie Hayakawa’s “Plan 75” is a chilling vision of a completely believable dystopian future; one that is all the more effective for how unassuming it feels for most of its runtime.

The film follows three subjects connected to Plan 75 in different capacities: Hiromi (Hayato Isomura), a recruitment agent who registers people for the program; Maria (Stefanie Arianne Akashi), a religious Filipino woman whose daughter is in such desperate need of medical care that she has taken a job as a laborer for the program; Michi (Chieko Baishô), a 78-year-old hotel cleaning woman who undergoes a series of unfortunate events that leads her to enroll in the program as a last resort. Michi is the nominal lead, and it’s through her eyes that we see how Japanese society has gotten to this point. She and her group of work friends excitedly go through the pamphlets from the government touting the program benefits, as well as the advertisements from private companies offering deluxe Platinum Plans where you can spend your stipend on a luxury resort with spa treatments and fancy meals. But when they all lose their jobs because one of them took a nasty fall at work, Michi finds life difficult. Her friends move in with their children, leaving her alone. No employer will hire her even though she’s in perfect health, and any landlord wants two years of rent upfront in order to rent to a senior citizen. The social commentary about how society treats the elderly – as liabilities instead of people – is heartbreaking, and the satire of how both the government and private corporations market death is scathing.

Hayakawa’s direction is clear-eyed and confident, with carefully composed static shots and long takes. The film’s opening scene is a stunner, beginning out of focus until a body enters the foreground and ending with a slow push-in out a window on a single tree after a gunshot rings out. The scene is all the more intense due to its lack of context, which becomes clear later in the film. Mileage may vary among audience members regarding the film’s deliberate pacing; combined with the film’s even-handed, hushed tone, it can make the film feel longer than it actually is. But that pacing pays off during the film’s stunner of a climactic sequence, in which we see what participating in Plan 75 actually looks like. It’s as chilling as any horror film, and the pacing and frame compositions have a large hand in accomplishing that.

While each of the film’s main characters makes indelible impressions in that sequence, the film’s most potent element is Chieko Baishô’s performance. The actress charts Michi’s descent out of society with remarkable precision, showing how she loses a piece of herself every time another part of her life gets slowly, and systematically taken from her. It’s a devastating performance, ensuring you can’t look away even as she reaches new painful depths of despair. Baishô’s performance is key to understanding that Plan 75 isn’t as benevolent a program as it may seem. While those who can afford to keep living may feel like it is something responsible they can do to ensure a better life for their grandchildren, many others don’t have a choice. The mere fact of the program’s existence is all the fuel others need to push the elderly even further out of society than they already are. Baishô is a perfect counter to that, imbuing Michi with warmth and gravitas even in her ordinariness.

The style of “Plan 75” may make it seem a bit ordinary itself. The rigorous formal composure of each shot can make it feel a bit distant and a bit too clinical. But that quality gives the film the impact it achieves by the end, thanks to that heartstopper of a climactic sequence and Baishô’s heartbreaking performance. A film this tightly controlled doesn’t happen by accident, and for Chie Hayakawa to have achieved this in her debut feature speaks very highly of her talents. “Plan 75” is, in its unassuming way, quite stunning. If this is what she can do her first time out, her career should last until she’s much older than 75.