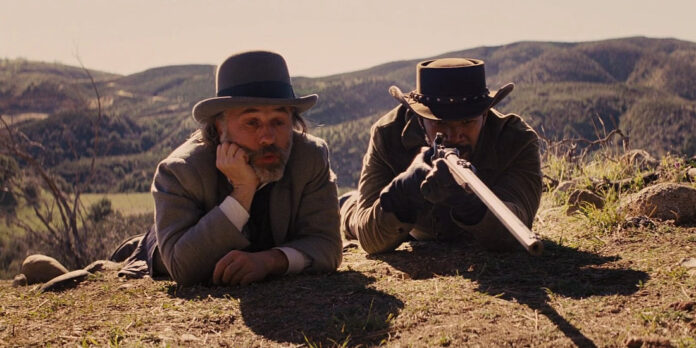 ​Quentin Tarantino loves to ruffle feathers. Whether we’re talking about the severed ear in “Reservoir Dogs” (1992), the gimp scene in “Pulp Fiction” (1994), or the use of racial slurs in, well, most of his films, the writer/director has stayed true to his uniquely twisted brand of pulp storytelling. The upside to such a unique brand is that it can produce unreplicable masterpieces. The downside is that it can lead to wildly indulgent and tonally inconsistent misses. “Django Unchained” (2012) is a fascinating release because it has elements of both extremes. It has stretches of ingenuity and creativity that rank as some of the best in Tarantino’s career while at the same time falling prey to weak pacing and a stylized tone that clashes with the grim subject matter. It’s a masterpiece to some and a miss to others, which has made it endlessly fascinating to discuss in the decade since its release.

The film chronicles the adventures of Django (Jamie Foxx), a freed slave, and Dr. King Schultz (Christoph Waltz), a bounty hunter who takes him under his wing. The two men bond over their takedown of the Brittle brothers in pre-Civil War America, but their bond is tested when Schultz agrees to help Django rescue his still-enslaved wife, Bromhilda (Kerry Washington).

“Django Unchained” is, in many ways, the middle chapter in Tarantino’s revisionist history trilogy. “Inglourious Basterds” (2009) reimagined WWII with baseball bats and a glorious comeuppance for an SS officer, while “Once Upon a Time in Hollywood” (2019) turned a horrific murder case into cartoonish, cosmic revenge against the Manson family. These two films thrive on their ability to convert tragedy into comedy and flip the violence of historical aggressors back onto themselves. We laugh at the sight of Nazis and cult killers suffering because we know the horrors they’ve committed, and Tarantino uses this historical context to his advantage.

“Django Unchained” attempts something similar, but it proves to be the least successful of the bunch. The scenes that turn mockery and violence onto the slave owners are hilarious, especially when they focus on the outfit run by Big Daddy (Don Johnson). The outfit’s attempts to outwit Django and Schultz are upended at every turn by their incompetence, and while they’re painted with the most exaggerated of brushes, the wit and energy of the writing make it work. Tarantino has been accused of many things, but subtlety is not one of them. He’s at his best when he realizes the potential of the violent, absurdist realities he creates.

Things start to fall apart when Django and Schultz arrive at the estate of slave owner Calvin Candie (Leonardo DiCaprio). It’s here that the violence takes a dramatic shift, away from the cartoonish bounty-hunting of the first act and towards the harrowing cruelty that slaves were forced to endure in real life. It’s jarring, to say the least, but what makes it even tougher to swallow is the inconsistent tone that Tarantino strikes. The introduction of Bromhilda turns a potentially impactful moment into a sight gag, while a Mandingo fight is buttressed by Candie’s snide remarks. Some of them land, while others feel awkward, as though the film is urging us to laugh at a situation that otherwise reads deadly serious. There’s a fine line between flippancy and inconsistency, and too often, “Django Unchained” seems unsure which side it wants to occupy. If the film is doubtful, then what hope does the viewer have?

Some of these tonal inconsistencies are balanced out by the cast, who do a uniformly excellent job. Waltz knocks it out of the park as the bounty hunter Schultz. In his second Oscar-winning collaboration with Tarantino, he manages to evoke the competence of his earlier performance while adding new shades of eccentricity and warmth. He’s the perfect compliment to Foxx, who plays the titular role with an ice-cold intensity. He knows that Django is the center of the film’s universe, and he delivers each of his lines (“I like the way you die, boy”) accordingly. The stoicism of Foxx’s presence also feeds into the character’s dangerousness. He scans like a cobra waiting to strike, which is something Tarantino’s first choice for the role, Will Smith, may have sacrificed for likability.

DiCaprio is having a ball as the dandified Candie. He chews the scenery as only an actor who finally gets to play a villain can, and even if the one-dimensionality of his performance played better in 2012 (when the casting was more novel), it’s still lots of fun, to watch today. He struts and monologues with such insufferable smarminess that you start to understand why Schultz would instead take a bullet than shake the man’s hand. However, the most revelatory performance upon rewatching is Samuel L. Jackson as the house slave Stephen. The character was significantly downplayed during the film’s promotion, but time has been kind to this sleight-of-hand villain. Candie is the embodiment of superficial evil, the kind you see coming a mile away, but Stephen is something far more complicated. He’s the product of an unjust system, and his ability to adapt and do whatever is necessary to survive has led him to terrorize his own people. The film’s handling of slavery and its various nuances has been criticized by writers more educated than me. Still, Jackson’s sneakily outstanding performance is one of the few instances where “Django Unchained” manages to blend social commentary and pulp storytelling successfully.

Tarantino’s desire to pay tribute to the Spaghetti westerns of his childhood manifests in different ways. There’s the title, which repurposes the Sergio Corbucci classic “Django” (1966), the cameo from the film’s star, Franco Nero, and the lengthy runtime indebted to the epics of Sergio Leone. There’s nothing inherently wrong with that last point, but the direction Tarantino decides to take with the last forty-five minutes kills nearly all the momentum the previous two hours had built up.

The shootout at the plantation sees both Schultz and Candie bite the dust. It feels like a logical point for the film to end, yet we’re forced to sit through Django’s capture, his being sold back into slavery, and his escape before he returns to the plantation for the climax. Beyond resolving some of the finer points of the narrative (this detour provides Django with some legal means), it adds little to the character and undercuts the mostly exemplary pacing we’d gotten beforehand. Even after several viewings, I’m left to wonder why Tarantino didn’t move a few details around and give us a tighter, more rewatchable experience (Whether or not the pacing issues can be attributed to the absence of Tarantino’s longtime editor, Sally Menke, remains to be seen).

There’s a lot to like about “Django Unchained.” The direction and the cinematography by Robert Richardson are superb, and, as was previously mentioned, the star-studded cast delivers throughout. Unfortunately, Tarantino’s refusal to edit himself results in a tedious final act, and his signature blend of violence and humor gets muddled by the story’s historical context. It’s a fun but flawed film on the cusp of mastery that comes up slightly short.