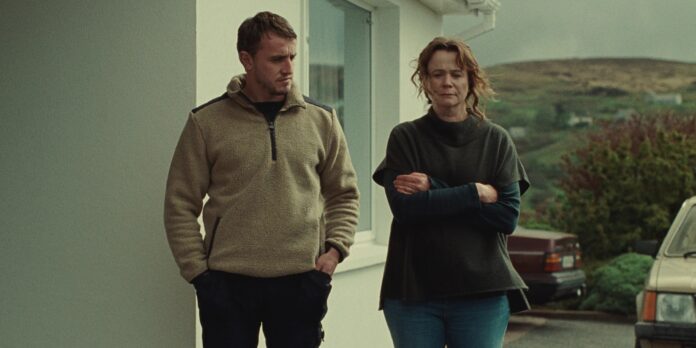 THE STORY – In a windswept fishing village, Aileen O’Hara lies to protect her son Brian from a serious allegation, causing a rift in the close-knit community.

Aileen O’Hara (Emily Watson) lives a quiet life in a small Irish fishing village. She’s overjoyed when her estranged son, Brian (Paul Mescal), returns home from Australia. However, his arrival upends her entire world, as she tells a lie to protect him that will soon have ramifications and force her to confront the prejudices and dangers of the small, close-knit town.

Directors Saela Davis and Anna Rose Holmer (“The Fits“) make it clear from the start they want to subvert storytelling tropes (The story’s inciting incident does not occur until nearly 40 minutes in). Instead, the two filmmakers take their time showcasing the day-to-day life in a dreary Irish town, allowing us to fully understand the characters before turning everything on its head with Brian’s arrival back into his mother’s life. Even though these storytelling choices may be intentional, viewers’ mileage may vary. The pacing is deliberate. The ending is abrupt. Yet the meticulous filmmaking provides so much to savor, even while the film remains small in scale.

Emily Watson is the heart of the film and the reason to seek it out as she rarely gets the opportunity to remind us what a phenomenal actress she can still be. Davis and Rose Holmer successfully capture her journey, from the joy of being reunited with her son to anguish as she struggles with tough ethical and moral dilemmas, beautifully illustrated through tight Jonathan Demme-esque closeups. She’s always been a consistent talent, but her performance here ranks among her very best work. Aileen is a complicated character to play; she’s a woman making objectively poor choices but for understandable reasons. She could be easy to despise in the hands of a lesser actress, but Watson makes her every decision understandable.

The story takes an interesting turn when it diverts from Watson and toward Aisling Franciosi’s character Sarah (“The Nightingale“), a friend of Aileen. Still, it’s here where Shane Crowley’s screenplay starts to lose focus its central focus in the third act. Franciosi provides an effective foil for Watson as someone who sees Brian for who he is. She provides one of the film’s most haunting moments when she leads a mass service, singing an old church hymn in a tight closeup while the rest of the world’s sounds drop away. Alongside her, Paul Mescal continues to impress with another outstanding and chilling turn, presenting an outwardly charming character whose apparent friendliness masks for an abusive interior. The young Emmy-nominated (“Normal People”) actor is having quite a year for himself after appearing in “The Lost Daughter,” “Aftersun,” and now this and he’s only continuing to get better with each passing role.

The cast is aided by Holmer and Davis’ knack for hypnotic editing and sound work, clearly demonstrated in their last feature film, “The Fits.” The sound of waves and clattering oyster shells serve as transitional editing cues, while well-choreographed long takes set within a fish processing plant and extensive closeups of fish slaughter emphasize the grim and ever-present sadness in the community. Composers Danny Bensi and Saunder Jurriaans (“Ozark“) provide an experimental score that functions in tandem with the film’s sound effects. They incorporate unusual instrument choices, including ones that evoke human breathing to create an eerie effect. Together, the film’s sound, score, and editing gradually increase tension, even as the plot itself moves slowly. The cinematography is also effective as tide shots of the ocean heighten the gloomy atmosphere, while a local pub which proves critical to the plot, is lit with hellish red hues.

Occasionally the film’s writing is on-the-nose and unfocused. “God’s Creatures” aims to examine the inherent sexism that exists in many small towns. For example, Aileen has achieved a management position, but her employment is still entirely subject to the whims of her male superiors. This part of the story is shown rather effectively as opposed to being told. Other times, the screenplay’s themes are bluntly spelled out in conversation rather than trusting the audience to decipher them on their own. Additionally, the film ends with a jarring point-of-view shift that leaves narrative threads unanswered. It is part of a broader effort to subvert storytelling tropes. Still, it feels abrupt and unsatisfying, especially considering how much time and emotional investment we’ve handed over already by the time we get to this point.

“God’s Creatures” craftsmanship is unimpeachable: the editing and sound are masterfully well-done, and Emily Watson delivers some of her best work in years. However, some of the script’s storytelling choices and the deliberate pacing drag it down. The film has a lot to say about modern society, and when it all ends, it feels as though it did so without finishing what it initially set out to do.