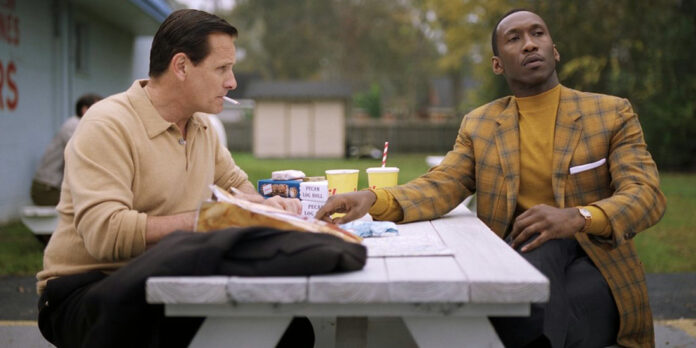 THE STORY – Dr. Don Shirley is a world-class African-American pianist who’s about to embark on a concert tour in the Deep South in 1962. In need of a driver and protection, Shirley recruits Tony Lip, a tough-talking bouncer from an Italian-American neighborhood in the Bronx. Despite their differences, the two men soon develop an unexpected bond while confronting racism and danger in an era of segregation.

​​​​​Stories about race and friendship are plentiful in Hollywood and have been for decades, particularly ones that explore relationships between African Americans and white people. In the past, these films were made by white men (as most films are) but as black directors have been able to have their films reach wider audiences it’s become apparent how limited a perspective has historically been available in these types of films. As in every previous decade of America, racial tensions are complex, and film has helped change people and, ideally, society’s outlook. Directors who are hoping to widen their audience’s perspective on race, as Farrelly was most certainly attempting with “Green Book,” have a responsibility to push the narrative forward, otherwise it simply reinforces the status quo and allows the very people who could be the most affected to walk away having all their preconceptions affirmed. “Green Book” falls into the latter category and winds up as nothing more than a feel-good movie that undercuts its own premise.

Tony (Viggo Mortensen) is a friendly bouncer at the Copacabana in New York, but after an issue between a mobster and the management, he is out of work for a few months while the club is repaired. Knowing he is hard up for money, a friend lets him know about an opportunity to be a driver for a doctor and Tony eagerly takes the interview. But when he arrives, he finds that Doctor Don Shirley (Mahershala Ali) is a Doctor of Music who also happens to be a black man that is looking for a driver and bodyguard to take him on a tour that will thread its way through the deep south. Tony, who has been shown to be deeply racist and is desperate for money, makes it only a few minutes before the interview devolves into an antagonistic exchange that ends with him stating his price and leaving. Doctor Shirley still ends up hiring him and the two men, opposites in so many ways, begin their unlikely trip together.

The tour starts off rocky. Doctor Shirley is a prim and self-possessed man who has purposefully surrounded himself with the finer things in life, whereas Tony is a vulgar and voluble bullshit artist from a working-class Italian neighborhood in New York.  At first Doctor Shirley attempts to convince Tony to change his sloppy ways so he can attend the swanky parties where the musician is performing, but Tony refuses, preferring to be outside with the other drivers. Eventually, the two men find a working relationship and as Tony begins to appreciate the Doctor’s virtuoso level musical talent and knowledge of the world, Doctor Shirley comes to find himself charmed by the blunt, salt-of-the-earth attitude of Tony. As their route enters the deep south, Tony finds himself forced to act as protector to Doctor Shirley as they come up against violent and cruel racists who take every opportunity to attempt to show the gifted doctor what they think of him. As Doctor Shirley becomes more and more dependent on Tony for survival, their relationship deepens to a friendship and they come to trust one another completely, even if they don’t quite understand each other.

The viewers’ enjoyment of “Green Book” rests entirely on the performances of its two main actors, Mahershala Ali and Viggo Mortensen, who are some of the best character actors working today. Both bring an emotional depth to their characters that is necessary for the light tone to carry the social commentary the film is trying to make and prevent it from feeling hollow. Mortensen is fun to watch as he curses and eats his way through the film and wouldn’t feel out of place in a classic mob movie with his portrayal of stereotypical Italian New York mannerisms. He elevates the character beyond a script that never forces him to confront his own racism, but Mortensen’s body language and facial expressions provide a nuance that Tony would otherwise be lacking. Ali, on the other hand, is all poise and courtesy as he moves through a world that will never fully accept him and his dedication to maintaining his self-control and above all his dignity makes for a heartbreaking performance. The few scenes where his façade breaks are the best bits of the film, such as when he finishes performing a piece of music and we see him light up and a gorgeous smile spreads across his face and we know these are the moments in his life that he lives for.

If “Green Book” weren’t a film that was specifically about race relations it would be much better, but in choosing that topic, it sets a standard for itself that requires it to be more nuanced than the films that came before it and unfortunately it doesn’t do that. By centering the story around Tony, it uses Doctor Shirley’s pain as a teaching tool for both Tony and the white members of the audience. It shows racism in stark and drastic terms, but it is outside our main characters, something that is done to Doctor Shirley and it gives Tony the opportunity to be the hero, his own racism fading into the background with only the barest nod of acknowledgment. At one point in the film after a near-disastrous run-in with the police, Doctor Shirley and Tony come as close as they ever do to discussing their differences in stark terms and the film allows Tony’s skewed perspective to be presented as the truth, although I’m not sure that is intentional. Ultimately “Green Book” is so concerned with making Tony likable that it sacrifices any moral message it may have intended to send.

The most frustrating thing about “Green Book” is that it could be a better movie. The script has some funny moments and the relationship between Ali and Mortensen has a natural chemistry that draws in the viewer. The set design, the look of the film and the music all feel authentic to the period and it creates a world that feels very genuine. Unfortunately, “Green Book” doesn’t use it’s full potential, as it softens its message, presumably in an attempt to make it easily palatable for mainstream white audiences, to the point where it has nothing new or interesting to say and feels like something made a decade or more in the past. While this film will undoubtedly attract a large audience, “Green Book” leaves a lot to be desired when it comes to challenging its viewers’ understanding of race and our shared history.