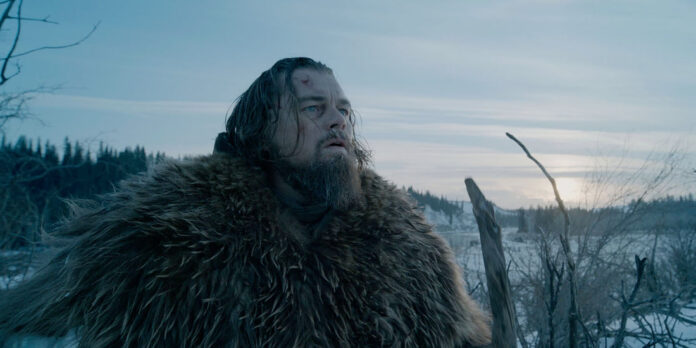 THE STORY – While exploring the uncharted wilderness in 1823, frontiersman Hugh Glass (Leonardo DiCaprio) sustains life-threatening injuries from a brutal bear attack. When a member (Tom Hardy) of his hunting team kills his young son (Forrest Goodluck) and leaves him for dead, Glass must utilize his survival skills to find a way back to civilization. Grief-stricken and fueled by vengeance, the legendary fur trapper treks through the snowy terrain to track down the man who betrayed him.
​
THE CAST – Leonardo DiCaprio, Tom Hardy, Domhnall Gleeson, Will Poulter & Forrest Goodluck

​Alejandro G. Iñárritu’s “The Revenant” is seemingly a direct response to anyone who believes that art needs to be enjoyable. This cinematic test of endurance tries the audience’s patience in every possible way, from its long running time to its brutal depictions of life in the wilderness to which we are forced to bear witness. Indeed, the director seems to revel in having the audience experience feelings of pain and strained endurance in ways that mirror the onscreen characters. In terms of this pairing of on-screen depiction and off-screen reaction, I have trouble thinking of a better executed vision. But is it any good?

Hugh Glass (Leonardo DiCaprio) is one of many men on a fur trading expedition in the early nineteenth century. When he is viciously attacked by a bear, his prospects for survival look hopeless. His colleague John Fitzgerald (Tom Hardy) is put in charge of Glass’s well-being, which leads to him killing Glass’s son and leaving Glass to die alone in the elements. But Glass survives his abandonment and embarks on a treacherous journey across an uncaring wilderness to seek his revenge.

As I stated before, “The Revenant” is an exploration of the abilities of human endurance. The film does not shy away from the brutal depictions of animal attacks, extreme weather conditions, injuries, human violence, and the cruelty of man towards their fellow man. If that sounds like it has the potential to get a bit tiring across the course of a two-and-a-half-hour film, that’s because it does, intentionally or not. Luckily, the film has the help of one of the most talented cinematographers working today: Emmanuel Lubezki. The celebrated director of photography uses his unique eye to capture the sweeping vistas of nature in unendingly beautiful ways. He famously used only natural light for all but one shot of the entire movie, which helps bring the audience as close as possible to a feeling of complete empathy with what the characters are seeing and experiencing. His camerawork is so essential that I believe the film would not work without it. The way he captures the dangerous but gorgeous wilderness helps keep the film from being an unending parade of misery; the beauty of the outdoors stands in direct contrast to the difficulties it presents to Glass, adding another layer of conflict to the story. And it’s not just the images that Lubezki captures that impress. In similar ways to his work on “Children of Men,” he thrives in long-shot action sequences, effortlessly moving the camera between areas of focus without ever losing the audience’s comprehension. Indeed, the cinematography overall is unbelievably impressive and would be reason enough to recommend the film.

One of the more celebrated aspects of the film upon its initial release was the performances. It even finally won DiCaprio his arguably-overdue Best Actor Oscar. And while the lengths of suffering he is forced to go through during the film are undeniably extreme, it is difficult to call it a great performance in the typical sense of the word. With very little dialogue (except some dream-like narration), there is not much of a character established for DiCaprio to play off of. We don’t get much more from him besides his ability to convincingly play pain and strife, which is impressive because DiCaprio wasn’t feeling these things during the shoot. But these qualities aren’t individualized, and whether it’s the limitations of the screenplay or not, we never really get to know Glass as someone other than an extremely resilient individual. Tom Hardy is the other notable performance, and while his mumbling style of line delivery is so difficult to understand that I had to use subtitles, his menacing presence and constantly unfocused eyes give the chilling impression of a predatory creature. He stands out among the cast, given the benefit of having perhaps the only completely fleshed-out character in the screenplay. We know his intentions and beliefs, and Hardy plays them with an evil apathy.

Across the board, the tech components of the film are consistently impressive. The visual effects and sound design are fantastic, always helping to keep the realistic and immersive world of the film intact. And the score is sparse and haunting, almost like sporadic snowfall. And while I have trouble with the direction in terms of clarity of story and characters, Iñárritu’s technical vision is practically flawless.

If you’re looking for a visually impressive tale that gets you as close as possible to feeling what the characters are feeling, you can’t do much better than “The Revenant.” If that prospect sounds fairly exhausting, you would also be correct. While the camerawork is worth seeing, it isn’t necessarily enough to overcome the laborious aspects of watching this film.