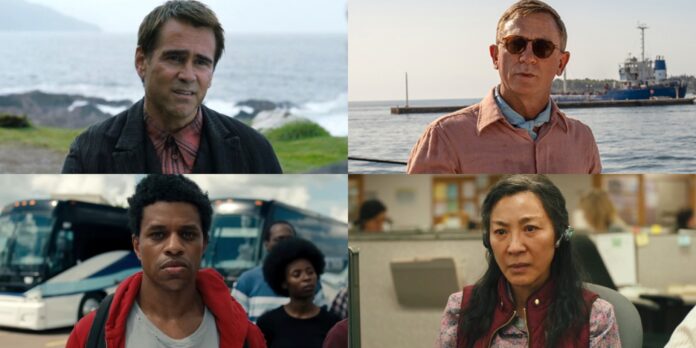 After a year-long hiatus from having an awards ceremony, but not a hiatus from actually giving out awards, the Hollywood Foreign Press Association returned with the Golden Globe Award nominations for their 80th year. Have their nominations reflected any changes as the Hollywood Foreign Press Association diversified its membership this past year, increasing from below one hundred members to over two hundred? It’s tough to say. As with any list of Golden Globe nominations, there are many surprises and things that make us sigh and say, “Oh, Golden Globes.” Let’s dive into the most noteworthy moments of this year’s film nominations.

A GREAT MORNING FOR “THE BANSHEES OF INISHERIN”
One of the few films not to miss a single expected nomination this morning, Martin McDonagh’s “The Banshees Of Inisherin” had an excellent morning. It landed nominations for Best Motion Picture Musical or Comedy, Best Director, Best Screenplay, Best Actor (Colin Farrell), two in Best Supporting Actor (Brendan Gleeson & Barry Keoghan), Best Supporting Actress (Kerry Condon), and Best Score. This is a phenomenal showing for the film that should bolster its perception as a top-tier contender for the Oscars. Farrell has already been in the hunt for a Best Actor win, and this indeed maintains that race for him. With a reasonably surprising Best Supporting Actress lineup here (we’ll get into it shortly), Condon could also be the frontrunner to win the Globe and possibly the Oscar next.

SHOCKING SNUBS FOR “WOMEN TALKING”
Without a doubt, the biggest misses of the morning all belong to “Women Talking.” Sarah Polley’s film landed nominations for Best Screenplay and Best Score but missed everywhere else. Zero acting nominations. No Picture or Director nominations. Consequently, no films directed by women were nominated in either of the Best Motion Picture categories this morning, and no women were nominated for Best Director. What happened here? The Globs have been even better at nominating women than men the past few years compared to the Oscars. The movie has been expected to be a top-tier contender this season. Is this just a Globes anomaly? While I think calling it a “Globes thing” is fine, it’s also time to wonder if the film is too contained for what awards bodies typically go for, especially among directors. That said, missing acting nominations is a whole other thing. At various moments this season, either Claire Foy or Jessie Buckley have been seen as threats to win Best Supporting Actress. Is vote splitting occurring? Does this mean their chances at a win are statistically dead?

As far as actresses who have won the Oscar without a Globe nomination, the list is relatively short. Youn Yuh-jung wasn’t nominated for the Globe and still went on to win the Oscar. All eyes turn to SAG now for these ladies as you have to go all the way back to 2000 when Marcia Gay Harden won the Oscar for “Pollock” without a Globe or SAG nomination. Could Foy or Buckley beat this stat? Anything’s possible, but this is a rough miss that won’t help the conversation around the film as a whole.

SUPPORTING ACTRESS SHAKE-UP
Alongside Condon, Best Supporting Actress features nominations for Angela Bassett (“Black Panther: Wakanda Forever“), Jamie Lee Curtis (“Everything Everywhere All At Once“), Dolly De Leon (“Triangle Of Sadness“), and Carey Mulligan (“She Said“). Conspicuously missing here are any of the women from “Women Talking,” as well as Hong Chau (“The Whale“) and Janelle Monáe, despite “Glass Onion: A Knives Out Mystery” making it into Best Motion Picture, Musical or Comedy and securing a Best Actor nomination for Daniel Craig.

Bassett scored the first Golden Globe acting nomination for an MCU film, which is more than Michael B. Jordan got for the first “Black Panther.” With Basset’s legendary reputation, this could have a snowball effect on her campaign. A Marvel stigma will undoubtedly be attached, making it an uphill battle, but showing up here was significant. Similarly, Curtis’ nomination is a good sign for her campaign. She’s been clear that she really wants the Oscar nomination, and with “Everything Everywhere All At Once” performing exceedingly well this morning, the “legendary status” will go a long way for her too.

While nominating major stars is par for the course for the Globes, it makes Dolly de Leon’s nomination even sweeter. Getting in at a big show like this is enormous, along with “Triangle Of Sadness‘” nomination for Best Motion Picture, Musical or Comedy. It wouldn’t be surprising for de Leon to show up at Critics’ Choice and possibly even SAG on her way to an Oscar nomination. Conversely, Mulligan’s nomination, the sole nod for “She Said,” represents an underperformance for the film, whose campaign has been waning in recent days. One might think awards bodies like the Globes would’ve nominated “She Said” even just for appearance’s sake, making the poor showing tough.

JEREMY POPE, ANA DE ARMAS, AND EDDIE REDMAYNE
Three contenders on the very outskirts of the race made their way into the awards conversation today in a big way. Ana de Armas, a previous nominee for “Knives Out,” landed a Best Actress, Drama nomination for portraying Marilyn Monroe in Netflix’s “Blonde.” With Michelle Yeoh and Margot Robbie in the Comedy/Musical category, it’s tough to say who they would’ve bumped out in a combined category, but de Armas is the most likely of the five. Similarly, Jeremy Pope scored a nomination for his star-making turn in “The Inspection.” However, Pope will likely be bumped out of the Oscar category when Farrell is competing (he was nominated in Comedy/Musical). While the reception for “The Son” has been muted at best, Hugh Jackman, also nominated in the category, is still a more prominent name than Pope, making it more likely that he could overcome his film’s poor reception and stay in the Best Actor race.

Another bubble contender for Netflix is Eddie Redmayne, a previous Globe winner who scored a Best Supporting Actor nomination for his chilling turn in “The Good Nurse.” While the movie didn’t make too many waves when it was released, Redmayne is a phenomenal campaigner, which is probably why he’s nominated today. He’s in at the expense of either Paul Dano or Judd Hirsch from “The Fabelmans” or even Tom Hanks from “Elvis,” who many thought the HFPA would go for. It’s a solid get for Redmayne, who will likely be taken as a more serious contender now, especially if he can repeat this nomination at SAG.

WHERE IS DANIELLE DEADWYLER?!
While many were betting on Gotham Award winner Danielle Deadwyler to win the Oscar, she missed a key nomination this morning for that prediction to hold true. Though few expected “Till” itself to score any notable nominations, her miss is undoubtedly surprising. No actress has ever won the Oscar for Best Actress and missed a Golden Globe nomination, with the exception of Sophia Loren for “Two Women,” whose film didn’t qualify since it wasn’t in English. Stats can always be broken, but this is a bad day for Deadwyler’s chances of winning the Oscar. “Till” may have scored a nomination from the National Board of Review, but critics aren’t going to bat for it much these past few days. Deadwyler can absolutely still score an Oscar nomination, but a win may be out of reach.

RRR CONTINUES TO SHOW UP
At this point, any nominations for “RRR” contribute to its building narrative. This morning, the HFPA gave it two nominations: Best Foreign Language Film and Best Original Song for “Naatu Naatu.” While India didn’t ultimately select “RRR” at their submission for Best International Feature, as critics continue to show support for the film, the likelihood of Best Picture and/or Best Director nominations increases. If only it could have appeared in Best Motion Picture, Musical, or Comedy. Still, any press is good press for “RRR.”

GLASS ONION SCORES FEWER NOMINATIONS THAN KNIVES OUT
Despite a bigger campaign, increased profile, and the power of Netflix behind it, “Glass Onion: A Knives Out Mystery” scored only two nominations today, Best Motion Picture, Musical or Comedy, and Best Actor, Comedy for Daniel Craig. “Knives Out” scored an additional nomination for Best Actress, Comedy for Ana De Armas. With Monáe missing the Best Supporting Actress nomination and the film missing Best Screenplay, it was an okay morning for the new Rian Johnson Mystery, but it could’ve been better. Still, considering the vast open space within Best Adapted Screenplay, the movie should be safe there when it comes to the Oscars.

BABYLON RECEIVES A BOOST
Damien Chazelle’s latest appears to have wowed the HFPA, scoring nominations for Best Motion Picture, Comedy, Actress (Margot Robbie), Actor (Diego Calva), Supporting Actor (Brad Pitt), and Score. Calva getting in as a relative newcomer is also a beautiful sign. Pitt showing up after some troubling allegations this year is a little surprising, but they clearly love the film, and that mentality of having a “big star” attend their show hasn’t been squashed due to the expanded membership it sees. The critical reception has been all over the map for “Babylon” (with official reviews still to come), so getting these significant nominations will help propel it into the next phase of the race.

Overall, these Golden Globe nominations didn’t hold too many shocks. I am still a bit surprised that the HFPA didn’t nominate a female director, given the inevitable backlash they would and are indeed receiving. Still, there are many great nominations here and a lot of first-time Golden Globe nominees to celebrate. Personally, I’m celebrating reading that Daniel Kwan and Daniel Scheinert are Best Director nominees for a film that seemed so out of the realm of typical awards contenders. This is what’s fantastic about covering the awards race; more and more, films are breaking the mold of what is considered “Oscar bait” and showing up purely on their originality and creativity.

What were your biggest surprises among the Globe nominees? Did any frontrunners change in your predictions? Which Globe win are you most rooting for? Please let us know in the comments section below or on our Twitter account.