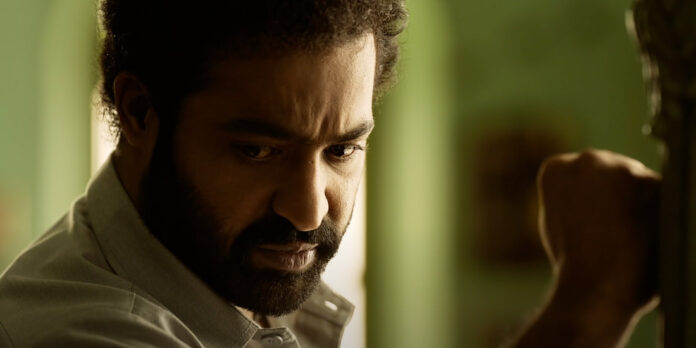 THE STORY – A tale of two legendary revolutionaries and their journey far away from home. After their journey they return home to start fighting back against British colonialists in the 1920s.​

At the beginning of “RRR,” a disclaimer warns the audience that the characters and events they will see in the film are fictional. But that’s not entirely true – the film imagines a fictional meeting and friendship between two very real figures in Indian history. Alluri Sitarama Raju and Komaram Bheem were revolutionaries who fought against the British Raj. There’s no evidence that they ever met, but director S. S. Rajamouli creates an imaginative version of history in which they did and developed a strong friendship. Tollywood made “RRR,” the Telugu-language film industry named in homage to Bollywood, and as of today, it stands as the most expensive Indian film ever made. Its stars, N. T. Rama Rao Jr and Ram Charan, two of the biggest names in Tollywood films, alongside director Rajamouli – the R’s in their names are another reason for the title.

Set in 1920s India, “RRR” focuses on the Indian rebellion against British rule. One storyline begins with the kidnapping of a young girl named Malli (Twinkle Sharma), who is taken from her parents by visiting English Governor Scott (Ray Stevenson) and his wife Catherine (Alison Doody), who finds her amusing. Their treatment of the girl as an exotic plaything and their brutal treatment of her family exemplify the horrifying English colonial rule. Bheem (Rama Rao), another member of the Gond people, vows to get Malli back and tracks her to Delhi. We meet Raju (Charan), known as Ram, as a commanding officer gives him a near-impossible task. The British army soldier is asked to bring back one specific man from a sea of rioting Indian men and remarkably is able to do so (Though he’s undoubtedly painted as a morally gray character, it does seem the audience is perhaps asked to forgive him too much considering how many men are killed or injured in this scene). The soldiers are offered a reward for capturing Bheem, and Ram is determined to be the one to succeed. But when the two meet for the first time, working together to rescue a young child in danger, they’re unaware of each other’s identities. Their friendship blossoms from there, and their bond grows, particularly as the suave and charming Ram tries to give the more awkward and down-to-earth Bheem advice on getting a woman’s attention.

While some of the actors in the film, notably Stevenson and Doody, overplay their roles in an exaggerated manner (which may or may not work for you considering this is an over the top movie in every conceivable way), Rama Rao and Charan perfectly balance the humor and fantastical elements of the filmmaking with the more serious and emotional beats. The two of them have excellent chemistry together that helps ground their friendship at the heart of the film.

Much of the action in “RRR” is approached differently than what American audiences may be used to seeing, but considering this grand film is currently streaming on Netflix, it’s the perfect excuse for them to broaden their horizons and see how other filmmakers are telling their stories overseas. Many of the action chase scenes have a comical feel but are juxtaposed with the harrowing scenes of British cruelty. Each sequence is incredibly creative and feels distinct from the previous one that came before it, despite just how many action pieces there are. The visual effects by V. Srinivas Mohan and A. Sreekar Prasad combine to captivate the audience’s imagination, especially in the scenes with the beautifully rendered computer-generated animals.

These numerous action sequences are broken up by an almost equal amount of musical sequences and two love stories, one for each of our leads. Alia Bhatt plays Ram’s fiancé, who is waiting for him to return, while Olivia Morris plays Jenny, Governor Scott’s niece, who is charmed by Bheem and is considerably nicer than her relatives. Jenny and Bheem’s romance provides a lot of the film’s necessary light comedy due to the language barrier between them, winning audiences’ hearts in the process. The music and score by M. M. Keeravani adds a sweeping amount of emotion and whimsy to the film. The most impressive number is certainly “Naatu Naatu,” in which Ram and Bheem show off their dance skills to the British women at a party, much to the dismay of the Englishmen present.

While Jenny shows that not all British people are evil, her horrific family members indeed remind us why the Indians are rebelling. These villains might seem like comical caricatures if one wasn’t aware of how, unfortunately, accurate their attitudes and actions are according to history. In truth, “RRR” only has two real detriments: its exceedingly long runtime and its costume work. At three hours, “RRR” may not be able to hold the attention of some audience members fully despite the film’s best efforts with its epic action sequences, eye-popping visual effects, and fun musical numbers, and there are scenes that feel overly drawn out. In addition, the costuming of the white British women is laughably inaccurate and awfully done, both in terms of historical accuracy and in general aesthetic. The outfits are a garish mix of time periods and in no way reflect the 1920s. They look more like prom dresses than actual period-appropriate attire, which may take some audience members out of the movie. However, considering how much of this film is not steeped within reality due to its over stylization, it might not.

It’s big, messy, and extravagant. The style may take a bit of getting used to for American audiences, but “RRR” is the kind of pure-adrenaline cinematic spectacle that should be sought out and celebrated. It’s a feat of filmmaking on multiple levels and how well it all comes together is a testament to Rajamouli’s visionary direction. While it can be streamed on Netflix right now, “RRR” should be seen on the most giant screen if possible for both its dramatic action and dance scenes.