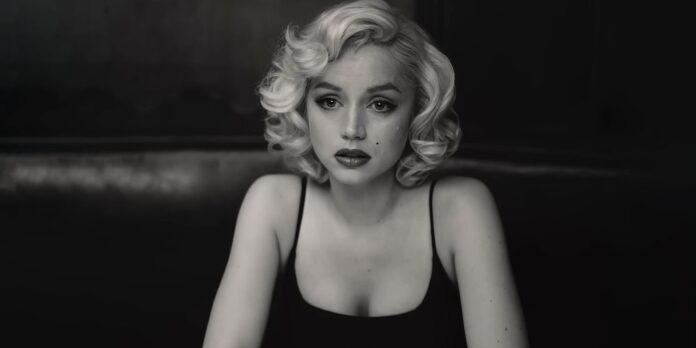 THE STORY – A look at the rise to fame and the epic demise of actress Marilyn Monroe, one of the biggest stars in the world.

For as long as I can remember, film critics (myself included) have complained about the over-reliance of movie biopics that adhere to the genre’s same tired formulas. Cradle-to-grave. Rise and fall and rise again. Over and over. Lather, rinse, repeat. Many of us have fervently wished that once…just once…a filmmaker would shake up the formula to offer a fresh look at his movie subject.

Well, our wish has finally been granted with writer/director Andrew Dominik’s new film, “Blonde,” which takes the old biopic tropes, smashes them to pieces, and reassembles them in a way that I hadn’t ever quite seen before. The final result, a fantasia on the life of Marilyn Monroe, is a biopic that’s undoubtedly one of a kind in its attempt to give audiences something different. Having seen the 166-minute final product, I had one thought: Be careful what you wish for.

Dominik’s approach to his film’s subject is, to say the least, unconventional. Rather than depicting, for example, his subject’s actual life as any film biography would do, Dominik utilizes as his source material Joyce Carol Oates’ 2000 speculative novel, which places a fictional idea of Marilyn in situations she never experienced with people she never met and a sexual assault that she never endured. Dominik, who displayed such an impressive sense of nuance in his 2007 masterpiece, “The Assassination of Jesse James by the Coward Robert Ford,” demonstrates little such restraint here, instead hitting Oates’ symbolism hard and adapting her vision with a surprisingly heavy hand.

Problems begin with the opening sequence in which a seven-year-old Norma Jeane Baker (a game Lily Fisher) is terrorized by her unhinged mother Gladys (Julianne Nicholson), who drives the little girl right into a forest fire, then tries to drown her in a bathtub. But not before Gladys shows her daughter an 8×10 photo of a suave-looking man whom she claims is Norma’s long-absent father. Since he is supposedly a big Hollywood hotshot, Gladys promises little Norma that he will surely come back someday to rescue her. So from the first moments, we meet Norma/Marilyn, “Blonde” sets her up as a victim with a severe case of daddy issues, a theme to which Dominik returns again and again.

Three primary desires drive the adult Marilyn (Ana de Armas). Though quickly becoming a star and a worldwide sex symbol, she craves to be respected for her acting, even taking classes at the renowned Actors Studio to improve her work. She repeatedly tries and fails to receive love and affection, even calling the men in her life “Daddy.” Finally, Marilyn is troubled by her inability to carry a baby to term, whether through miscarriage or studio-mandated abortion. This storyline provides some of the most awkward moments in the film, with Dominik including a “womb-cam” and an unborn baby asking Marilyn if she plans to abort him. And don’t even get me started on the moment when Marilyn decides not to have an abortion because she sees a big STOP sign en route. Really?!

All of this would likely have been unwatchable were it not for de Armas’s remarkable performance at its center. All that speculation whether the Cuban-born actress could ever embody the all-American Marilyn? Forget it. She nails the assignment and then some. Like most of the best performances in biopics, de Armas’ Marilyn is not an impersonation, even as she captures the actress’ speech patterns and physicality to a tee. It’s the tortured soul within Marilyn that comes across in de Armas’ work that she brings to vivid life even when the script fails her. Even though the storyline deprives her of the chance to display Marilyn’s famed sense of humor, de Armas delivers a fully lived-in performance that is never less than compelling.

On the other hand, most of the film’s supporting characters are written as either leeches or gargoyles, with even terrific actors confined by the limitations of their roles. As the unstable Gladys in the film’s opening scenes, Nicholson starts at an eleven and only gets loonier from there. While Bobby Cannavale shows promise in his early scenes as Marilyn’s second husband, Joe DiMaggio, even he is soon reduced to becoming little more than a wife-beating goombah. Only Adrien Brody, as husband number three, playwright Arthur Miller, is given any kind of nuanced material to play with. His scenes with de Armas mark the only time in the film that she has a scene partner who is actually playing on her level.

The most painful waste of talent in “Blonde,” I’m afraid, is the superlative technical team whose yeoman efforts do much to make “Blonde” a pleasure to at least watch. First and foremost, Chayse Irvin’s cinematography is so striking that you could just turn off the sound and drink into the beautiful images he has created. From his high-contrast use of black-and-white to bursts of color that pop off the screen, Irvin’s work is one of the year’s most singular. Initially, I thought that the shifts between color and black-and-white somehow reflected the Technicolor world of Marilyn vs. the more stark life of Norma, but that seems too orderly for Dominik’s seemingly haphazard use. No matter. Just sit back and enjoy the beauty on display.

Impressive, too, are the editing efforts of Adam Robinson, who keeps the narrative flowing, even in the film’s elongated third act. (And a massive shout out for his seamless insertion of de Armas’ Marilyn into such classics as “All About Eve” and “Some Like It Hot.”) In addition, the musical score by Nick Cave and Warren Ellis works well within the context of the film and is one that I would happily listen to entirely on its own.

Yet, for all the talk about the film being a serious critique of the sexual exploitation that Marilyn endured both in her personal and private lives, there is still a queasy suspicion watching the events play out in “Blonde” that the film may be using Marilyn in just the same way. If, for example, you’re going to include in your biography a vicious rape that never happened in real life (a questionable decision at best), why would you shoot it with such an in-your-face close-up? To shock us with its brutality? Perhaps. But is it there to get us off just a little bit? That’s the ick factor that looms as a heavy cloud over all 166 minutes of “Blonde” — that we are watching the brutalization of a character for our own entertainment that’s shot in a way that may veer dangerously close to becoming trauma porn.

There’s much to admire about many of the elements of “Blonde,” but frankly, I never want to see it again.