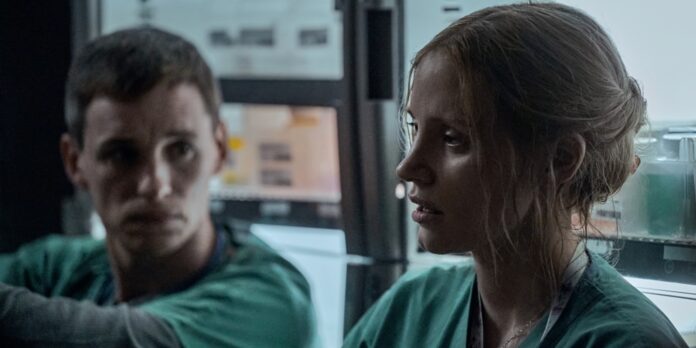 THE STORY – Nurse Amy Loughren is shocked when Charlie Cullen, one of her colleagues, is found responsible for the murder of dozens of patients over a period of sixteen years, across two states and nine hospitals, without being charged.

“The Good Nurse” marks Tobias Lindholm’s first American film as a director. The Danish director and writer last worked on 2020’s “Another Round,” for which he co-wrote the script along with Thomas Vinterberg. As the film won the Academy Award for Best International Feature Film, there certainly were some high expectations for what Lindholm would work on next. Unfortunately, his true crime thriller, “The Good Nurse,” based on a real and deadly serial killer (and written by “1917” and “Last Night In Soho” writer Krysty Wilson-Cairns), falls flat despite the best efforts of its leading stars.

The film is based on the 2013 book by Charles Graber about Charles Cullen (Eddie Redmayne), who confessed to killing forty patients while working as a nurse in New Jersey. However, it is believed that he likely killed many more, perhaps even in the hundreds. If the estimates are accurate, he would then be considered the most prolific serial killer on record. All of this should make for a frightening and gripping film, but unfortunately, “The Good Nurse” only occasionally rises to its source material’s potential.

Krysty Wilson-Cairns’s script primarily focuses on Amy Loughren (Jessica Chastain), a nurse who is also a single mother dealing with her own health issues. She’s under an almost unimaginable amount of pressure at work but still manages to treat her patients with more kindness than the healthcare system even allows sometimes. With everything that Amy is dealing with, it’s easy to see why she welcomes the help of a new nurse when he arrives to assist her. Charles transfers to the New Jersey hospital where she works and is similarly sweet to the patients while trying to help Amy with her family responsibilities and aiding her when her heart condition causes issues for her at work and at home. He’s a bit socially awkward (in that classic Eddie Redmayne way) but endearing enough never to suspect anything malicious of him. However, patients begin dying mysteriously – even ones who seemed on their way to a full recovery. Homicide detectives Danny (Nnamdi Asomugha) and Tim Braun (Noah Emmerich) get involved but are continually blocked by hospital bureaucracy. Not only do we see how Amy is struggling to make ends meet and receive the care she needs, but we also come to understand how a system like this allowed Charles Cullen to slip through the cracks in real life.

Chastain is expectedly excellent in the lead role. She brings a sturdy determination and strength to Amy that is confident in the face of evil, both in its human and systemic form, as exemplified by the hospital she works at. “The Good Nurse” is very blunt in its commentary about how the hospital system and healthcare, in general, are fundamentally broken. Chastain acts as the audience’s guide through all of the red tape as she gets closer and closer (dangerously so) to uncovering Charles’ true nature. And this is easily one of Redmayne’s best performances yet. He has an otherworldly quality that is ideally suited for his more quirky characters. Still, when told to tone it down to play someone more human, like he is here, but with inherent darkness lurking beneath the surface, the results are bone-chilling. Some of his work in the third act is enough to make your skin crawl as he wrestles with the character’s morality.

Despite a reliable Chastain leading the way, the film moves at an agonizing pace, often lingering on shots for no apparent reason. The editing by Adam Nielsen slows things to a glacial pace at times, like in a scene between Amy and Charles at a diner. It should be more thrilling as we come to finally understand that Charles, for all his apparent nice-guy demeanor, is responsible for the deaths and begin to worry about his proximity to Amy and her daughters. However, the film isn’t able to take advantage of this effectively. The cold cinematography sometimes makes it difficult to get emotionally attached to the characters and the story as it keeps us at an arm’s distance, with the intense score by Biosphere feeling overdramatic, almost to overcompensate for the lack of a more intriguing directorial style.

It’s almost astounding that with two solid performances – one of the best of Redmayne’s career as he slowly descends into creepiness – and a fascinating true story at its center, “The Good Nurse” isn’t better than it is. Perhaps part of the issue is that Charles has no motivation attributed to his killings, which is accurate to the real-life killer but such potentially terrifying ambiguity feels left unexplored. “The Good Nurse” might be worth seeing just for Chastain and Redmayne’s performances, but it’s far from the film it should have been.

<b>THE GOOD - </b>Jessica Chastain and Eddie Redmayne both give fantastic performances in a film that sheds light on the failings of the healthcare system. <br><br> <b>THE BAD - </b>Cold, distant, but not engaging enough to be thoughtfully interesting. The pacing is tedious and struggles to make its very obvious points.<br><br> <b>THE OSCAR PROSPECTS - </b><a href="/oscar-predictions-best-supporting-actor/">Best Supporting Actor</a><br><br> <b>THE FINAL SCORE - </b>5/10<br><br>"THE GOOD NURSE"