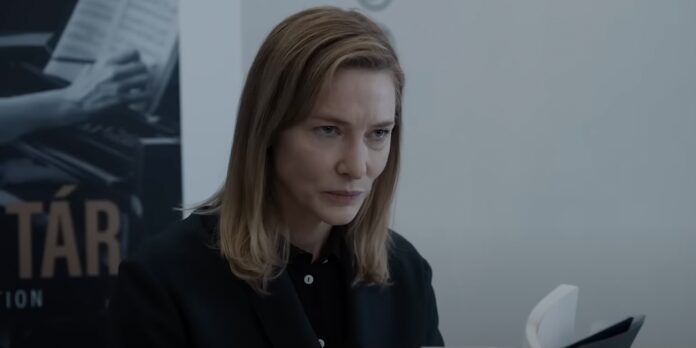 As Cate Blanchett earns “career-best” raves for her winning work in Todd Field’s “TÁR,” she remains atop the rankings for this year’s Best Actress race. Still, as anyone who’s ever followed an awards season can tell you, it’s never good to be “the early frontrunner” (pour one out for last year’s Kristen Stewart). Though Cate seemingly has everything going for her at the moment – her performance is sure to be one of the most awarded by critics come the end of the year, and she’s dominating the conversation like no other contender – two obstacles stand in her way. The first is the challenge provided by the category’s other equally compelling contenders (“Everything Everywhere All At Once’s” Michelle Yeoh, “Till’s” Danielle Deadwyler, and “The Fabelmans‘” Michelle Williams, to name a few), but the second is arguably the more significant, historically – the fact that the Academy doesn’t like awarding “bad women” in Best Actress.

Anyone who watches “TÁR,” regardless of whether they liked it or not, will come away noting how “cold” and “challenging” the film is. Whether this is a positive or negative depends on the individual viewer, but it’s an indisputable fact that the film is far from the most “accessible” awards contender this year, and, frequently, that can put an acting contender at a disadvantage compared to their competitors from more “mainstream” fare (for every Natalie Portman who overcomes this hurdle, there’s a Jessica Chastain who usurps her artier adversaries). But it’s not just the fact that “TÁR” is “cold” that has me worried for Cate Blanchett – it’s the fact that she’s… not playing a particularly good person. And while that probably sounds like a stupid reason to be scared outside of the context of awards season (“what does a character’s morality have to do with an actor’s performance?”), let’s revisit how little the Oscars choose to honor “villains” in the lead acting categories. And, more importantly, how little they choose to honor “villains” in the lead actress category.

This potential problem for Blanchett started to plague my psyche as soon as I saw more and more comparisons between her performance in “TÁR” and Daniel Day-Lewis’ in “There Will Be Blood.” It’s a flattering comparison, to be fair – given that many would consider Daniel Day-Lewis’ performance in “There Will Be Blood” to be his best to date (as many are saying for Blanchett as well), and it also hailed from a “cold”/”challenging” two and a half hour long drama – but aside from the similarities in their skillfulness at portraying these parts, their characters are also alike in how acrimonious they are. Day-Lewis is actually one of the few actors to win the Best Actor Oscar for playing a “bad man” (a character who is corrupt by moral and/or legal standards), alongside the likes of “All the King’s Men’s” Broderick Crawford, “Raging Bull’s” Robert De Niro, “Amadeus‘” F. Murray Abraham, “Wall Street’s” Micheal Douglas, “Reversal of Fortune’s” Jeremy Irons, “The Silence of the Lambs'” Anthony Hopkins, “Training Day’s” Denzel Washington, “The Last King of Scotland’s” Forest Whitaker, and “Joker’s” Joaquin Phoenix.

Those are quite a few names, but in the grand scheme of the 94 years of the Oscars, ten actors winning the Best Actor award for playing villains isn’t really much to write home about. However, when we turn our attention toward Best Actress, the situation looks far direr. Out of 94 winners, I could only single out four who would be widely categorized as “villains”: “One Flew Over the Cuckoo’s Nest’s” Louise Fletcher, “Network’s” Faye Dunaway, “Misery’s” Kathy Bates, and “Monster’s” Charlize Theron. And, to make matters worse, while I agree with categorizing Dunaway’s and Bates’s characters as “antagonists,” I don’t feel that Fletcher and Theron fully fit this description. Fletcher’s Nurse Ratched has been misidentified as a villain for years when, in all actuality, she was simply a nurse trying to keep control of her patients. Our view of her as a villain is warped by the fact that the patients are our protagonists (Will Sampson’s Chief and Jack Nicholson’s R.P., in particular), and though some of her methods might be extreme, I don’t think she’s a “cold-blooded criminal” by any means. And when it comes to Theron, many people tend to forget that Aileen Wuornos’ serial killing spree actually started due to a sexual assault. Though she may arguably take things “too far,” she evokes sympathy from us all the same.

So, if we remove more morally complex characters like Fletcher’s Nurse Ratched and Theron’s Aileen Wuornos from our list of actresses who have won Best Actress for playing villains, that leaves us with two – Dunaway and Bates. And Blanchett, who plays an abusive and manipulative narcissist whose poor treatment of her peers and “improper” relationships with her students leads to her own downfall over the course of “TÁR,” would fit in with these two, as opposed to Fletcher and Theron. Those are… not great odds to win an Oscar. And while I – and many others – believe that the captivating craft on display in Blanchett’s performance and the universal acclaim she’s received thus far can help her ward off audiences’ potential aversion to this corrupt character, there should still be a concern that her tyranny will keep her from a third Oscar trophy. But why? Why is this a concern for an actress but not for an actor? We’ve already established that it’s hard for a lead villain to win an Oscar in either category, but why are the odds so much lower for women than they are for men?

If we look at the nominees for Best Actress in recent years, this discrepancy certainly isn’t caused by fewer of these characters “existing.” Just last year, Oscar winner Olivia Colman’s portrayal of self-proclaimed “unnatural mother” Leda Caruso in Maggie Gyllenhaal’s “The Lost Daughter” was hailed as one of her best performances to date, making her an early Best Actress favorite despite Leda’s supposed “abrasiveness,” according to some audiences. Suppose you don’t want to blame the character’s coldness on Colman’s loss. In that case, you could say she wasn’t a top contender because she had won so recently (Frances McDormand says hello), but you certainly couldn’t blame it on the industry’s reception to her film: Colman made every precursor (with the odd exception of BAFTA, due to their jury rulings), and, although last year’s Best Actress category featured no nominees from Best Picture contenders, Colman tied with Nicole Kidman as the nominee in a film with the most nominations overall of their quintet (both “The Lost Daughter” and “Being The Ricardos” had three apiece).

And let’s not forget that, a year prior, “Promising Young Woman’s” Carey Mulligan was widely seen as the frontrunner for much of the industry awards, despite only winning the Critics Choice Award (this was an odd year where 4/5 of the eventual Best Actress nominees all won one precursor a piece, so the frontrunner was never crystal clear, even though most gravitated towards Mulligan). However, despite her film’s vast overperformance all season long (and the fact that she was the only nominee from a Best Picture contender, aside from Frances McDormand), she continually stumbled at ceremonies that should have been easy wins. Even though the race was seen as being between her and “Ma Rainey’s Black Bottom’s” Viola Davis in the end, it was McDormand who took the lead last minute and won, likely buoyed by “Nomadland’s” Best Picture win. In fact, you could say both Mulligan and Davis were hurt by playing “complicated” women who took no prisoners and weren’t afraid to make enemies as they took their lives (and careers, in Ma Rainey’s case) into their own hands, while McDormand was the softer/subtler alternative.

And the list goes on and on and on. Why couldn’t Mary Tyler Moore’s performance as an emotionally unavailable mother in “Ordinary People” win her the Academy Award after she’d already earned the Golden Globe and her film was the frontrunner for Best Picture? Why wasn’t Meryl Streep’s third Oscar for “Doubt,” after she had already won the Critics Choice Award and SAG Award in the lead-up to the Oscar ceremony? You can blame that one on Kate Winslet’s last-minute category switch, but you’ll have difficulty convincing people that her character’s causticity played no role. Why did Rosamund Pike – and “Gone Girl” as a film – not receive the industry recognition she deserved, despite being a critical and commercial success? Sure, you can say that was “Julianne Moore’s year,” but we’ve seen “overdue” narratives falter before (hello, Glenn Close?), and let’s not forget that both Pike and Moore were their films’ only nominations – neither film was more beloved than the other. The darkest Best Actress nominee to actually win in recent memory (if you overlook Meryl Streep’s portrayal of Margaret Thatcher in “The Iron Lady,” which was a rather hagiographic depiction of the former Prime Minister) is Natalie Portman in “Black Swan.” Still, even then, you can hardly classify her as a villain. She was merely an artist warped by mental illness and a maddening obsession with pursuing perfection. This is not the female equivalent of Daniel Day-Lewis in “There Will Be Blood” or even Joaquin Phoenix in “Joker.”

So, the question still remains: why are we as an industry okay with awarding men for “daring” to immerse themselves in dark, depraved, and diabolical characters, but not women? Why are we so turned off by seeing actresses “break bad” and behave in a malevolent manner that is found to be “fascinating” and “formidable” in men? If anything, it’s more impressive when women take the risk to star in such sinister roles, knowing that they’ll be facing an uphill battle trying to overcome the misogyny that arises when an actress attempts to side-step the tried-and-true attributes of a “leading lady.” She can speak her mind, but not too much. If she “dresses down,” she better still look beautiful. And above all else, she should never ever exert control over a man. In a just world, the Oscars would “only be about the art,” and we wouldn’t have to have this conversation. But instead, even the assumed “forward-thinking” Academy has a ways to go before they accept that the morality of the character an actress plays is irrelevant when it comes to assessing the quality of her work. When men “break the rules,” they’re celebrated. When women do it, they’re cast aside.

What do you think? Have you seen “TÁR” yet? If so, what did you think of it and do you think the Academy will reward Cate Blanchett with her third Oscar for this role? Please let us know your thoughts in the comments section below or on our Twitter account, and check out our latest Oscar predictions here.