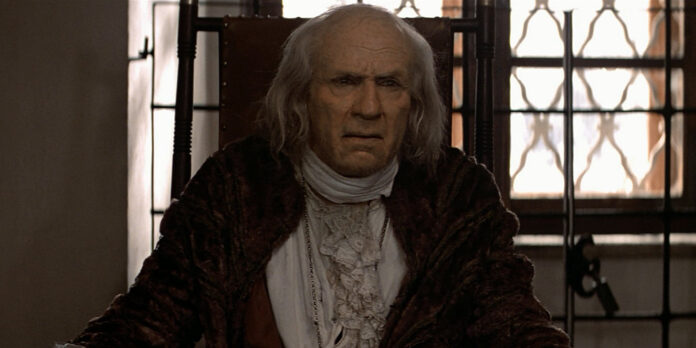 ​​​The loss of director Miloš Forman earlier this year is one that many lovers of cinema sincerely felt. Forman’s career spanned many decades and was highly acclaimed, and for very good reason. Many appreciated his artistry and versatility, being able to bring an authenticity to any story he touched, no matter how larger than life his characters seemed to be. When analyzing his career, it’s hard not to view his pair of Best Picture winners as crowning achievements. Personally, I find both to be incredible, but if given the choice between this and “One Flew Over the Cuckoo’s Nest,” I must say I gravitate toward this incredible epic. “Amadeus” is a film I find to be one of the decade’s great films and a high-ranking achievement of all Best Picture winners.

For those who may not be familiar, the film centers around the supposed rivalry between two classical musicians in the eighteenth century. An aging Antonio Salieri (F. Murray Abraham), having just attempted suicide, is telling the tale of his relationship with the world’s most famous composer of the time, Wolfgang Amadeus Mozart (Tom Hulce). The film flashes between the old and young Salieri as he details the relationship the two men had, fueled by jealousy and resentment. Both men are consumed by their passions to the point of delusion and ultimate sacrifice, and it is a war that each of them faces with each other and within themselves.

Forman was a filmmaker that was constantly obsessed by the notion of capturing realism. His eye always sought to create grounded, realistic situations between characters that emphasized their authentic emotions. It’s quite astounding how Forman manages that consistency even in the somewhat lofty material of “Amadeus.” Period dramas can often suffer from feeling too dry, where lame characters are only meant to fill up the puffy dresses and decorated sets. But Forman is able to tap into that great character drama while using filmmaking techniques to emphasize those points. Here he shows his masterful skill at taking all elements of production and creating spectacular sequences that are incredibly engaging. It is to his credit that his adept skills as a filmmaker finds such beauty in every frame.

As wonderful as Forman’s achievements are behind the camera, he has a great deal of support from the entire team of this film. One of the most important aspects is the terrific screenplay. Peter Shaffer adapted his own play for the film, and the results are just as outstanding as I can only assume the original piece was. The relationship and conflict displayed between these two artists feel rich and satisfying to watch. As this bond becomes more complex, the revelations become an even greater discovery, and every scene is written with delight and profound fascination for its characters. Shaffer’s script lays a foundation for the entire film that helps to build up a sense of drama for the viewer to be completely taken in by, and it comes across as another masterful piece to the film.

Of course, the acting across the board is also spectacular. The entire cast here delivers excellent performances, but one would be hard-pressed not to single out F. Murray Abraham. In what could conceivably be called an iconic performance, Abraham embodies all the complex layers to Salieri. The ambition and humility, the greed and generosity, the cruelty and compassion are all swirling inside him, and Abraham manages to be in total key with all these points and strike them efficiently. It is even more pronounced when we see flashes of him as an old man, and underneath the incredible makeup still is a man consumed by his past fortunes and failures. It is not often that dependable character actors get the chance to show their strengths in strong leading roles, and I’m so thankful that he was able to show us his immense talent. I’m even more thankful that a Best Actor Oscar was his reward.

Even though Abraham may be the standout, one cannot discount the achievements of his co-star Tom Hulce. As the title character and the source of Salieri’s frustration, Hulce certainly delivers a performance that is more flamboyant and boisterous in comparison. However, there is the total freedom to do so, portraying a man who has had no limits in his life and suddenly finds himself consumed by a great emptiness. Hulce’s mixture of playfulness that soon turns melancholic is deeply felt, and his presence on screen is always engaging. It may pale slightly in comparison to the more inward work of his main co-star, but his performance is enjoyable to watch all the same.

The ensemble is littered with a great deal of nice supporting turns that all do their best to shine. Jeffrey Jones plays Emperor Joseph II with a lightness that adds a streak of levity even in somber scenes. Roy Dotrice as Mozart’s father is a looming force that is effective in his sparse scenes. Elizabeth Berridge may be the weakest performer in the cast, inhabiting the role of the famous man’s wife, but she still manages to capture some effective moments, particularly in her interplay and chemistry with Hulce. Even small bit players like Simon Callow, Barbara Bryne, Charles Kay, Christine Ebersole, Patrick Hines, and a fresh-faced Cynthia Nixon all deliver spectacular turns even with minimal screen time. The focus of this story may be squarely on its two leads, but the entire cast delivers and is just as engaging.

This is a film that I constantly point to as being a great example of not only every element of filmmaking being employed but being done so on such a magnificent scale. The performances are incredible, the writing superb, the direction spectacular and the entire technical craft is just astoundingly abundant. There is hardly an element here that is not used to absolute perfection, and it is all the more enjoyable when one is able to take in a deeply rich story about the artistic struggles between two complex characters. The film has held a strong reputation since its debut more than thirty years ago, and it has earned its staying power. It is most definitely not only the best film of its year but one of the greatest cinematic achievements ever produced.