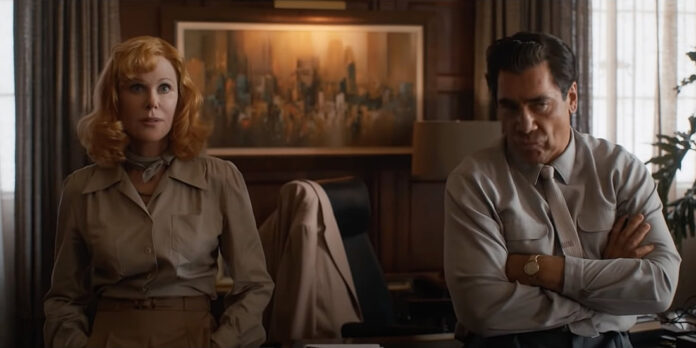 ​​How’s this for a week? You’re Lucille Ball. You’re responsible for getting a new episode of the nation’s most popular sitcom rehearsed and filmed in only a few short days. At the same time, your marriage is falling apart as your husband’s infidelities are splashed across the front pages of the Hollywood tabloids, and your career is in jeopardy when the nation’s most powerful radio columnist accuses you of being a Communist. And, oh yes, you have to break the news to your network and your sponsors that you’re pregnant and demand to take the taboo step of incorporating the baby into the sitcom’s storyline. And how was your week?

Of course, capturing the energy of chaos within the corridors of power is often the meat and potatoes of Oscar winner Aaron Sorkin’s career. Add to that his knowledge of television production, most notably with his Emmy-winning work on “The West Wing,” his latest film, “Being The Ricardos,” should have been the cause for excitement among film fans. Instead, it generated an unexpected controversy, largely to some fans’ grumbling about the film’s casting for the leading roles of Lucille Ball and her husband, Desi Arnaz.

As Ball, Nicole Kidman was thought by some to have zero comedic chops and look nothing like Lucy. At the same time, the casting of Javier Bardem was criticized for having a Spanish actor portray the iconic Cuban-American. At first, I thought that the controversy seemed a bit overblown, but as I sat down to watch “Being The Ricardos,” I must confess I did have a bit of trepidation. I needn’t have worried, though, since this cast is clearly working at the top of its game. Bardem, for example, has got Desi Arnaz down cold, both in his character’s strengths and especially in his weaknesses. His Desi still madly loves Lucy in their real-life relationship and respects her as his partner in business, but he does have an eye for the ladies (and Bardem has never seemed sexier onscreen). Typically such a character would be loathed by an audience. Still, Bardem never loses us, revealing new layers of Desi bit by bit and keeping us guessing “did-he-or-didn’t-he?” right up until the film’s powerful conclusion.

It was speculated by some in social media that casting Kidman as Lucy would be the movie’s biggest disaster; it is, in fact, the film’s greatest triumph. She never, for example, plays Ball as a comedienne. Instead, Kidman chooses to present her as a dramatic actress who can do comedy — a big (and intelligent) difference — as well as a powerful woman who knows just how to wield that power for herself, her show, her career, and her marriage. Make no mistake; this is one of Kidman’s best screen performances with a role that allows the actress to surprise us yet again with her remarkable versatility.

The level of impact of the performances is so high in “Being The Ricardos” is due in no small part to Sorkin’s vibrant screenplay. That quality should come as no surprise — Sorkin has built a distinguished career creating characters of depth in often unexpected situations for decades now. This extends especially to creating moments for each of the members of his ensemble cast to shine. All of it mainly benefits such great actors as J.K. Simmons and Nina Arianda as the Arnazs’ co-stars, William Frawley and Vivian Vance, with each character coping with the emotional fallout from their friends’ personal crises.

However, what is most surprising about “Being The Ricardos” is the strength of Sorkin’s direction, which is easily head-and-shoulders above his DGA-nominated work in last year’s “The Trial of the Chicago 7.” In his two previous films behind the camera, Sorkin seemed to regard his directing work as simply a vehicle for his scripts, whereas in “Being The Ricardos,” they’re equal partners, with one genuinely enhancing the other. And yes, there is one of those trademarked Sorkin “walk-and-talk” scenes, with this one, a single take of Bardem speaking excitedly while walking backstage through the “I Love Lucy” set. It is so impressively staged that I almost completely forgot the scene’s content.

Just a personal note. Back in my sordid past (before I came on board the Next Best Picture team), I made my modest living working in television, both behind a desk and on a soundstage, spending countless hours working on sitcoms. Most of those episodes were taped using the three-camera technique, which allowed the studio audience to see the actors in action. It’s was a revolutionary way of filming in its day and still remains the gold standard in television (And, most importantly, it was invented by Desi Arnaz). Sorkin himself has never done a three-camera show in his career, but you’d never know it from “Being The Ricardos,” at least judging by the impressive precision which he displays when bringing the “I Love Lucy” scenes to life. It reveals an attention to detail in Sorkin’s directing that I had previously only seen in his writing, and it lifts his work as a director to another level.

Yes, there are moments early in the third act when the film begins to lose a bit of steam as the pieces start to fall in place for a standard happy ending predictably. But Sorkin has one more twist up his sleeve in the film’s final Lucy/Desi scene — a tiny drop of vinegar amid the film’s sweetness that is sure to get audiences talking. That final twist of the knife is a mark of some of the best Aaron Sorkin scripts and helps to place “Being The Ricardos” among that select company.