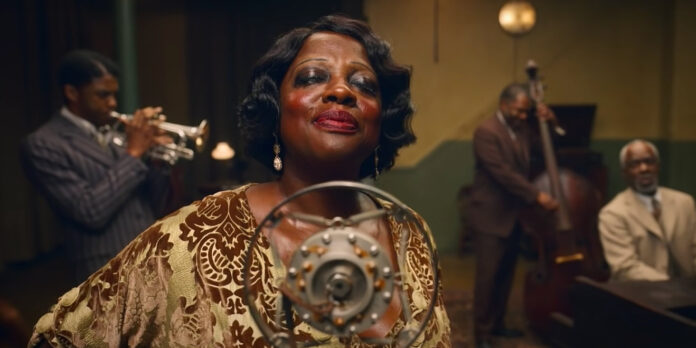 THE STORY – Tensions and temperatures rise over the course of an afternoon recording session in 1920s Chicago as a band of musicians await trailblazing performer, the legendary “Mother of the Blues,” Ma Rainey (Viola Davis). Late to the session, the fearless, fiery Ma engages in a battle of wills with her white manager and producer over control of her music. As the band waits in the studio’s claustrophobic rehearsal room, ambitious trumpeter Levee (Chadwick Boseman) – who has an eye for Ma’s girlfriend and is determined to stake his own claim on the music industry – spurs his fellow musicians into an eruption of stories, truths, and lies that will forever change the course of their lives.
​
THE CAST – Viola Davis, Chadwick Boseman, Colman Domingo, Glynn Turman, Michael Potts, Taylour Paige & Dusan Brown
​
THE TEAM – George C. Wolfe (Director) & Ruben Santiago-Hudson (Writer)
​
THE RUNNING TIME – 94 Minutes

​​Getting the opportunity to revel in the celebration of Black storytelling is always a momentous occasion to acknowledge. The landscape of stories that can be told is varied, and it’s especially poignant when granted a look into the complicated lives of such characters that make them feel three-dimensional and authentic. Few writers were able to capture this nuanced presentation quite like August Wilson. Many audiences were introduced to his work several years ago when “Fences” was brought to the screen. Now, another of his celebrated works has been given the treatment of adaptation: “Ma Rainey’s Black Bottom,” an enticing exhibition of extraordinary performances and an intriguing thematic discussion.

Based on Wilson’s noted play, the story centers on a group of musicians in a Chicago recording studio in the 1920s. The band is set to make a new album for legendary blues singer Ma Rainey (Viola Davis). Ma’s impressive vocals match the fiery and antagonistic tone she takes with both the management as well as her band. Her opposition is squarely focused Levee (Chadwick Boseman), a boisterous trumpeter whose own ambitions clash with Ma throughout the session. Over the course of just a few hours, the music flows and tensions flare as this collection of fierce personalities all start to come out.

One staple that’s often attributed to the adaptation of plays is a great emphasis on the performances. The actors are often a driving force on the stage and that translates to a significant showcase on the screen as well. The beating heart of the entire ensemble belongs to Boseman. His winning smile and jovial presence are an unending supply of charm that’s a delight to watch. At the same time, he finds great dramatic depth in several powerful moments that are completely arresting. It’s a layered performance of a complex and tortured individual who can make you laugh as easily as make you cry. It’s difficult to not acknowledge Boseman’s passing while watching this performance, but it’s a heartfelt tribute to his immense talent that’s on display in every frame.

The other major element of this winning collection of performances belongs to Davis. While the role may feel somewhat diminished in comparison to the spotlight on Boseman, she’s by no means a lesser presence. There’s incredible strength in her ability to carry so much force and gravity in just a simple glance or walk. The physicality she brings emphasizes the hardened exterior that only briefly gives way to the conflicting insecurities within. She has her moments of energized combativeness, but it’s never from a place of hyperbole. It’s a wholly realized characterization that’s captivating to watch. Outside of her and Boseman, the rest of the cast features fine turns but only do their best to support the film without being exceptional standouts. Colman Domingo and Glynn Turman are definite highlights, but they mainly work as the truest of supporting players.

If one of the aforementioned attributes of adapting a play is the focus on performances, another is the tendency for the style to feel constricted by its theatrical roots. For his efforts, director George C. Wolfe does an admirable job to bring kinetic energy to the filmmaking, particularly in the indulgence of dynamic cinematography, vibrant costumes, and textured makeup designs. At the same time, the claustrophobic staginess of the production can’t be entirely excised, and it leads to several moments that come across rather flat. It’s what also adds to the pacing problems, which sometimes makes the brisk 94-minute runtime feel longer than it is. Still, it’s a mostly commendable job at making this material feel as cinematic as possible.

Ruben Santiago-Hudson’s adaptation delivers what any translation of a stage play should accomplish: It reconfigures the sequences in a new medium while keeping intact the thematic commentary. The task is successful in this regard, even if it does mean the numerous monologues can feel a bit removed without a live audience to soak it all up. There’s also a sense that the characters here are blunt in their expressions and the complexity comes more from the actors than what’s on the page. However, what remains within this story is a resonant message about the passion one can have for the art they create, especially in seeing the value of Black artistry. The struggle to keep true to one’s own integrity in the face of a world looking to distort creative work for selfish purposes is deeply felt. Despite a somewhat manic execution, the themes themselves are quite compelling.

There’s no doubt that “Ma Rainey’s Black Bottom” is an absorbing watch, even when its design isn’t perfect. The filmmaking does its best to bring an energizing style, but it still wrestles with the innate theatricality of the material. That ends up making the film feel laborious in its pacing at times, and stale in some of the storytelling. However, that doesn’t take away from the vivid craft on display nor, most importantly, the commanding performances from the cast. Boseman and Davis are the most alluring attractions in this talented ensemble, all giving great work for the purpose of, once again, exposing the intricate and distinct tales of the Black experience. That continues to be Wilson’s greatest legacy, and it’s no different here.