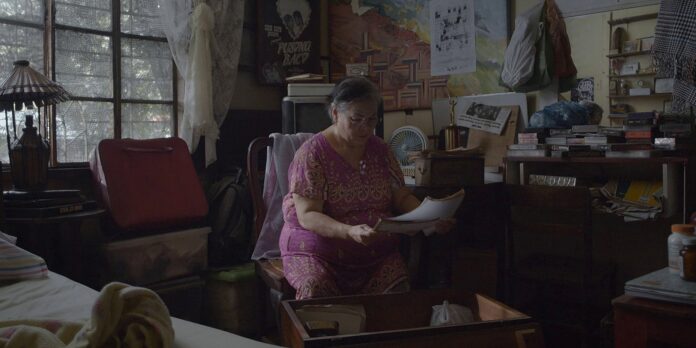 THE STORY – Fiction and reality blur when Leonor, a retired filmmaker, falls into a coma after a television lands on her head, compelling her to become the action hero of her unfinished screenplay.

Filmmaking in the 1980s veered in different directions across the globe, but one common thread among that time in cinema stands out. Be it American, Hong Kong, Bollywood, or Filipino filmmakers, everyone was putting out campy action movies with barebone scripts whose primary purpose was to move a macho protagonist from one fight scene to the next, equipped with choppy editing, corny sound effects, gruesome kills, forced romance, and stilted dialogue. These 80s movies can’t be considered “good” under the strictest analyses of filmmaking, but there remains something that still draws us to them. There is a reason people still guilt-watch Arnold Schwarzenegger’s “Commando” or any number of Jean-Claude Van Damme films. Something is endearing about the simplistic morality, the shoddy filmmaking, and the abundance of mano-a-mano fight scenes. “Leonor Will Never Die” understands that appeal and creates a “Purple Rose of Cairo” style tribute to campy 1980s Filipino action movies.

Writer/director Martika Ramirez Escobar approaches the material with the most meta angle imaginable: following Leonor (Sheila Francisco), a once-revered 80s action filmmaker, into one of her unfinished scripts after she lapses into a coma. There, she must complete the film’s story and reckon with her life’s tragedies and disappointments as her own life story, and that of her estranged son begins to merge with that of the film.

Ramirez Escobar has extensively studied 80s action filmmaking as she meticulously evokes the feel of one of these video-store classics. It is in these recreations that the film obtains its best laughs. The hokey sound effects, gratuitous sex scenes, and over-the-top deaths (death by a cement mixer, anyone?) will surely make fans of the genre giggle knowingly. However, the film has to reckon with the fact that when it opts to recreate “bad” cinema so lovingly, it provides a story that, by definition, is not that interesting. And as the novelty of the spot-on recreations wears off, the scenes set within the fake movie begin to overstay their welcome.

Fortunately, Ramirez Escobar’s unique approach ensures that there is more to the film than a “Black Dynamite” style tribute to a bygone sort of filmmaking. The choice to focus on an older woman within the world of a basic machismo action film provides plenty of room for commentary on the 80s action genre. Additionally, the film has as much fun with the portions of the story set in reality as it does with the fictional world. In its own way, “reality” in this film is almost as insane as fiction. TVs fall from windows, ghosts wander about, and there’s even a subplot about a pregnant man. Ramirez Escobar is throwing as much weirdness as possible at the wall and seeing what sticks. Some of it works, and some of it doesn’t, but what does work is the recurring theme throughout the real world of the importance of film, even campy film, to communities. For example, the film’s climax involves dozens of people crowding around a beaten-up TV to watch how the story onscreen will unfold. It is a moving reminder of the power that movies have to connect us.

And there’s more emotion to be found in the story as Sheila Francisco delivers a moving performance as Leonor. Her search to fix her own mistakes as a parent by rewriting an unfinished film ends up being surprisingly touching, especially as it entangles her son in a “Big Fish” type journey of his own parental re-evaluation. Francisco nimbly plays a Leonor who is simultaneously ridiculous but who also showcases deep, believable sadness, and most importantly, who you can root for when she enters a third-act battle carrying a hammer. Given the film’s balance of tones, Leonor is not an easy character to pull off, and Francisco’s achievement in this endeavor is amazing.

Additionally, Ramirez Escobar’s filmmaking is top-notch. She may be committed to recreating the look of 80s B-movies, but the fictional actioner is better framed than any film from that era. The fight scenes are well-choreographed. In both the real and fictional worlds, the production design is visually dynamic but carefully designed to reflect the characters who inhabit each location, with Leonor’s chaotic home looking exceptionally well-designed. Most importantly, the way the film leaps between fantasy and reality without becoming incoherent is an impressive feat of editing.

Everything about “Leonor Will Never Die” is bursting with energy. The whole movie is a mess of sorts, but it is a glorious, chaotic mess. And because of that, it is difficult to watch it without a smile. Its meta-ness sometimes becomes too much, with an ending that feels a bit too pleased with itself. But most of what comes before that is so bursting with its own unique identity that it is infectious to watch unfold. “Leonor Will Never Die” may be a love letter to 80s Filipino action movies, but it goes much further than that. It is a love letter to all movies from all communities and how they connect us all.