“one flew over the cuckoo’s nest” 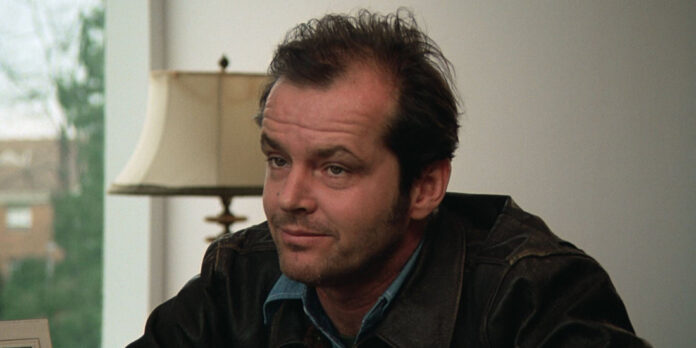 ​THE STORY – When Randle Patrick McMurphy (Jack Nicholson) gets transferred for evaluation from a prison farm to a mental institution, he assumes it will be a less restrictive environment. But the martinet Nurse Ratched (Louise Fletcher) runs the psychiatric ward with an iron fist, keeping her patients cowed through abuse, medication and sessions of electroconvulsive therapy. The battle of wills between the rebellious McMurphy and the inflexible Ratched soon affects all the ward’s patients.

​​After the passing of director Miloš Forman earlier this year, many (Myself included) went back and revisited the films he directed throughout his career including his first Best Picture/Best Director winner, “One Flew Over The Cuckoo’s Nest.” Feeling curious about how the 5 time Academy Award winner has aged over time, I am happy to report that Forman’s bittersweet film remains just as timely, provocative, sad, enjoyable and resonate as ever. It’s a timeless classic featuring what is, in my opinion, one of the greatest ensembles of all time and a true testament to the human experience. It is the very definition of essential viewing.

Randle Patrick McMurphy (Jack Nicholson) is a belligerent convict who has a history of assault and statutory rape. In an effort tog et off from work detail, he gets transferred for evaluation from a prison farm to a mental institution assuming it will be a less restrictive environment. However, the martinet Nurse Ratched (Louise Fletcher) runs the psychiatric ward with an iron fist, keeping her patients in line through abuse, medication, and sessions of electroconvulsive therapy. The battle of wills between the rebellious McMurphy and the inflexible Ratched soon affects all the ward’s patients with disastrous consequences.

Jack Nicholson was already a household name by the time “One Flew Over The Cuckoo’s Nest” came out. Having already gained 4 Academy Award nominations leading up to “Cuckoo’s Nest,” Jack was seen as overdue and it would’ve been easy to simply give him the award for such a showy part. However, Jack took it even further past the zany antics and gave the character of Randle McMurphy unexpected depth, allowing us to see ourselves in him and thus he gave us his most fully realized on-screen character to date. Randle McMurphy was the perfect anti-hero for 1975. Much like the character, the country was very rebellious towards authority figures and free-spirited. McMurphy gave a face and a voice to that spirit and “One Flew Over The Cuckoo’s Nest” is not so much about whether or not McMurphy or the other inmates are insane but it’s more about their desire to be free, what does that freedom really mean, especially within the context of society where there are rules and walls all around us. For McMurphy, he may be trying to get out of serving actual prison time but he soon realizes that the life he has chosen for himself is its own kind of prison as it prevents him from living his admittedly self destructive lifestyle his way by his rules.

Instead, he’s living under the rules of Nurse Ratchet, played with focus, seething rage and unnervingly calm intensity by Louise Fletcher. The contrast between Ratchet and McMurphy makes for one of the great protagonist/antagonist relationships within the history of cinema precisely because of their inherent duality. McMurphy is reckless, aggressive, obnoxious and crude. Yet, he’s charismatic, funny, loveable and at his core, caring towards the other inmates within the hospital (Which ultimately leads towards his downfall and the film’s greatest tragedy). Nurse Ratchet is cruel, precise and the complete embodiment of the established authority. However, she’s presented as a nurturing and highly regarded nurse who truly believes she is doing the right thing for her patients. Their characters embody the themes of the film and help us to ask thought-provoking questions along the way. To assume that one is wholly good and the other is pure evil is a disservice to the level of care that went into bringing these characters to the screen by the actors, screenwriters, and Forman.

Nicholson and Fletcher aren’t the only ones who shine through in Miloš Forman’s masterpiece. At the time of its release, the hospital was inhabited by unknown actors who would go on to have lengthy careers and it’s easy to see why. The performances by every member of the cast are impeccable, from Brad Dourif’s innocent stutter to Sydney Lassick’s child-like personality to Christopher Lloyd’s provocative bursts of anger and energy. Even Danny DeVito is completely unrecognizable as all of the actors go into character throughout the shoot, completely losing themselves in their characters. And then there is Will Sampson as Chief who exists to push the themes and questions surrounding McMurphy (Is he really insane or just not meant for this world? How did he end up here? And why?) but takes a look at them from another perspective. Their moments in the film are the most genuine and when we get to the film’s devastating third act, they’re also the most heartbreaking or uplifting, depending on how you choose to interpret the film’s famous ending.

Employing a naturalistic sense of space with an eye for the little details from both the environment and the characters, Miloš Forman captures the soul of this movie on camera in a sure-handed manner which exhibits a sense of style without distracting us from the writing or the actors. Its subliminal work that is deliberate and rightfully earned him an Oscar for Best Director. His decision to let the cameras roll on all of the actors in a scene  (Particularly the group therapy sessions) and then precisely edit the film to give us glimpses of their reactions to a line or moment, gave us a better glimpse into the characters, their daily lives and their humanity. We, the audience, might be told that these men are all crazy but Miloš humanizes them and allows us to forget and thus remember that in the end, we’re all human and we all deserve to be free.