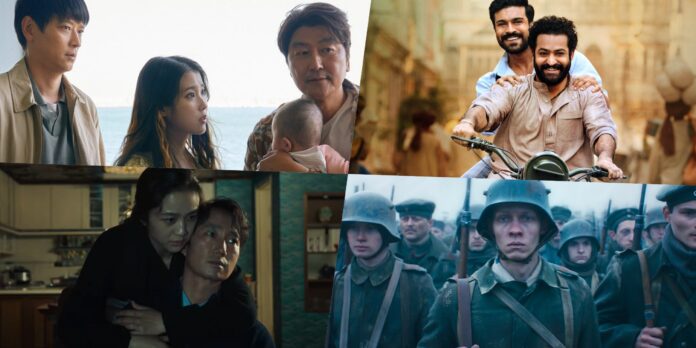 International films have been present at the Oscars since René Clair’s “À Nous la Liberté” was nominated for Best Production Design back in 1932, while Jean Renoir’s “La Grande Illusion” was the first non-English language film to be nominated for Best Picture in 1938. Since then, a handful of international films have received nominations in categories outside of “Best International Feature Film,” with Bong-joon Ho’s “Parasite” being the first non-English film to win Best Picture. Last year we saw films such as “Drive My Car,” “Flee,” and “The Worst Person In The World” all receive Oscar nominations outside of Best International Feature Film. This year, a few titles from around the world stand out as having the potential to be Oscar-night success stories, hopefully leading to a broadening of perspectives for film lovers and Academy voters alike.

ALL QUIET ON THE WESTERN FRONT

The 1929 novel by Erich Maria Remarque was first adapted by Universal Studios in 1930 and went on to be the third film to win the Academy Award for Best Picture. Considering Steven Spielberg’s “West Side Story” received seven Oscar nominations last year, there is evidence that indicates a fondness for the familiar among Academy voters. Unlike its 1930 predecessor, this year’s adaptation, directed by Edward Berger, is entirely in German and shows the story from the German perspective. While contributing to the film’s verisimilitude and authenticity, this may create obstacles between itself and a Best Picture nomination. Per our very own Daniel Howat: “If ‘All Quiet on the Western Front‘ was in English, it would be a guaranteed Best Picture nominee. There’s no reason this film shouldn’t be a major contender this awards season”. As the film has the potential for a slew of other nominations (Best Director, Adapted Screenplay, Cinematography, Editing, Makeup & Hairstyling, Original Score, Production Design, and Sound), there may be just enough universal love for the film to make it over the line and strike Oscar glory nearly a hundred years since the original film.

It is well established that Hollywood, and therefore the Academy, loves movies about movies. It has also been established that the Academy loves stories about how watching movies in childhood inevitably has a meaningful impact on a beloved director’s life (“Belfast,” “The Hand Of God,” “Roma,” etc.). While Alejandro Gonzalez Iñárritu’s “Bardo” is not a straight autobiography of its director and has received mixed reviews since its premiere at the Venice Film Festival, Iñárritu’s own history of success with the Academy, and the film’s blind ambition, may be enough to make him a serious contender for Best Director and for the film to snag other nominations, such as Best Cinematography. The new re-cut version of the film, which is screening in a few days at the AFI Film Festival ahead of its limited theatrical run, will be telling.

Director Hirokazu Kore-eda won the Palme d’Or in 2018 for his heart-wrenching chosen-family drama “Shoplifters.” This year, he returned to the festival with his latest tear-jerker, “Broker.” Its lead actor, Song Kang-ho, is a familiar, beloved face among film lovers, who made his first appearance at the Oscars in 2019 as a member of the cast of “Parasite.” For his role in “Broker,” he won the Best Actor prize at Cannes, which may serve as the impetus for a worthy nomination at this coming Oscar ceremony. Delicately balancing comedy and drama, the film’s script, also written by Kore-eda, should also be up for consideration for Best Original Screenplay despite the film not even being selected for Best International Feature Film this year.

Recounting the middle years of Elisabeth of Austria (or ‘Sissi’ as she was affectionately known) in an unconventional, dreamlike state, Marie Kreutzer directs her star Vicky Krieps in a dynamic performance as the troubled, aging Empress in “Corsage.” While competing out of competition at Cannes, Krieps was awarded an acting prize in the Un Certain Regard category, which recognizes films and performances of unconventional styles. While not a leading contender for the win, Krieps could appear as the lone international nominee among the intense Best Actress race. Krieps’ performance is supported by superb costume design, which goes beyond recreating the era and contributes substantial meaning to the film’s themes and overall style. While period pieces are easy bait for Academy voters, this film’s costume design deserves recognition at an exceptional level.

Historically, the Oscars have not been kind to Park Chan-wook, though in their defense, his films have never been selected as South Korea’s submission for Best International Feature Film. The most obvious explanation is that his films, which often feature explicit sexual content and ambiguous morality, are too “out there” for American Academy voters and are unlikely to be chosen for the shortlist. Of course, there is no reason a film not selected to represent its home country cannot be nominated in other categories, but that rarely, if ever, happens. This year, however, things may finally change. His latest film, “Decision To Leave,” has been selected as South Korea’s submission this year, thereby making it more likely to be considered for other categories. As Park Chan-wook won the prestigious directing prize at the Cannes Film Festival back in May, his name will inevitably be in the conversation for a nomination for Best Director at the Oscars. Other possibilities include a nomination for the film’s screenplay, editing, and score, which have been notably praised.

Admittedly, a Polish film about a donkey wandering throughout Europe is a tough sell to American audiences, even if it was inspired by the great Robert Bresson’s “Au Hasard Balthazar.” Still, having won the Jury Prize at Cannes and being Poland’s official submission for Best International Film, “EO” has a chance to secure a nomination for its 84-year-old director, Jerzy Skolimowski, and the awe-inspiring cinematography by Michał Dymek. As of 2022, the Academy has yet to instate a “Best Animal Performance” category, though surely the equine performers of “EO” would be surefire competitors if such a category existed.

Just a few weeks ago, connoisseurs of cinematic excellence (and people who like fun) were shocked when India announced that its submission for Best International Feature Film would not be the phenomenon that is the epic, historical, musical, action-packed buddy-drama “RRR.” Though excluded from this competition, the film, which has proven to be beloved among notable, vocal Academy voters and audiences alike, may still have enough momentum to secure nominations in other categories. It may easily be considered for Best Film Editing, Sound, Visual Effects, Original Score, and Original Song for “Naatu Naatu,” which would provide an exceptional live performance for a broadcast that has recently suffered from a lack of viewership. All of this could even lead to Best Director consideration for S. S. Rajamouli. Despite being home to the largest film industry in the world, only three Indian films have ever been nominated for an Academy Award. This unprecedented enthusiasm from western audiences may prove to be enough for “RRR” to score a nomination in one category or another. Though, based on its success, it is safe to say that the Academy needs “RRR” more than “RRR” needs the Academy.

What do you think? Are there any other international films not mentioned that you believe stand a chance to score an oscar nomination outside of Best International Feature this year? Please let us know your thoughts in the comments section below or on our Twitter account, and be sure to check out our latest Oscar predictions here.