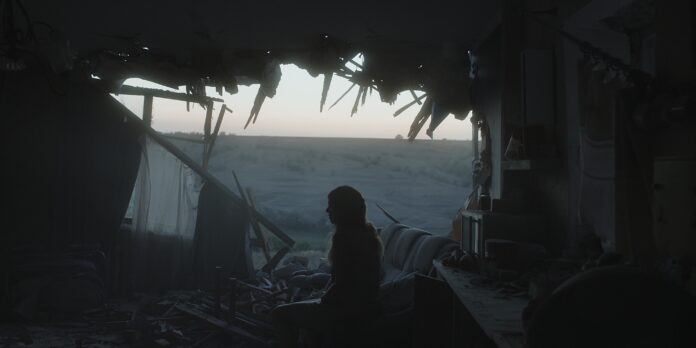 THE STORY – After flight MH17 crashes in eastern Ukraine, violent tensions disrupt the lives of an expecting couple living in Donetsk.

Ukrainian Maryna Er Gorbach’s solo directorial debut “Klondike” won the Directing Award for World Cinema Dramatic Competition at Sundance in January 2021. The film eerily depicts a story of a couple’s decision to stay in place at their home as the threat of an oncoming war with Russia looms in the distance. One month later, in real life, Russia invaded mainland Ukraine, further escalating Russia’s violent aggression and escalating Ukraine into war. Though powerful regardless of the timing, Er Gorbach’s film has deepened in purpose as the war has grown. “Klondike” is a powerful, quietly observed drama highlighting the war’s pain and senseless tragedy.

The story is told through the eyes of Irka and Tolik (Oksana Cherkashyna and Sergey Shadrin, respectively), a Ukrainian couple eagerly anticipating the birth of their first child. War draws near on July 17th, 2014, when Malaysia Airlines Flight 17 is shot down and crashes near their home. Even before the deadly plane crash, the couple, especially Tolik, has been ready to get out of harm’s way to protect his family. A misfire from locals decimated part of their home, taking out an entire wall and leaving it open and exposed. The war is invading their lives – right into their bedroom. How much will Irka and Tolik take before they decide it’s worth leaving their home behind?

Er Gorbach and cinematographer Sviatoslav Bulakovsky capture the stark reality of war in the Ukrainian countryside with an unblinking eye. Long unbroken takes steeps the viewer in a painfully believable world, catching all of the human moments as they unravel. Slow pans reveal more of the world as characters come in and out of frame. The stillness of the camera, along with its separation from its subjects, creates an unsettling calmness throughout the film. War is shaking the foundation of these characters’ lives, but the lens we’re viewing it through is unshaken. It’s a gripping presentation highlighting the juxtaposition between living a normal life and experiencing a war-torn reality.

While there are many heavy, dramatic moments, especially in the riveting third act, it’s in smaller scenes where the darkly funny and deeply human beats can be found. Like Irka sitting down to watch a football game next to the bombed-out hole in their home or when Tolik tries to have sex with his pregnant, uncomfortable wife as a crew searches the wreckage of the plane crash nearby. An annoyed Irka asks, “We don’t have walls, and you still want to do it?” These moments are profoundly mundane. Life must go on, even as war creeps into their world. There’s levity in the tragedy, balanced on a razor’s edge thanks to brilliant performances. Cherkashyna manages to find truthful brilliance in her performance as Irka tries to reconcile the global calamity with her small desire to piece her home back together for her child.

This film certainly isn’t easy to watch. Though there are moments of lightness, it’s ultimately a distressing film about the personal costs of an unnecessary war. Irka’s nationalist brother Yuryk clashes with Tolik, accusing him of being an anti-Ukrainian separatist. In reality, Tolik wants to live his life, trying to remain apolitical, not out of apathy or some darker intent but out of a desire to simply exist. Er Gorbach is able to build both the marital tension and the ever-increasing threat to their lives without devolving into melodramatics. The ensuing drama resulting from such a steady sure hand is painfully authentic by the time we reach the devastating climax.

Irka and Tolik dream about their future. A baby, new furniture, a remodeled home, and life as a family stretched out in front of them. “Klondike” holds that potential in one hand and the realities of war in another. As Irka’s painful labor kicks in, a reckoning with the war-torn reality in store for the child sets in. Every moment rings true thanks to Er Gorbach’s confident direction. With a keenly observant eye, a haunting visual style, and a grounded, personal story, “Klondike” is a reminder of the sprawling impact of war in both significant and small ways.

<b>THE GOOD - </b>With an unflinching eye, "Klondike" blends the mundanities of life with the dark absurdity of war. Depicting events near the beginning of the Russo-Ukrainian War in 2014, the film hits even harder in 2022.<br><br> <b>THE BAD - </b>The film's slow-moving intensity may be off-putting to some viewers.<br><br> <b>THE OSCAR PROSPECTS - </b><a href="/oscar-predictions-best-international-feature/">Best International Feature Film</a><br><br> <b>THE FINAL SCORE - </b>8/10<br><br>"KLONDIKE"