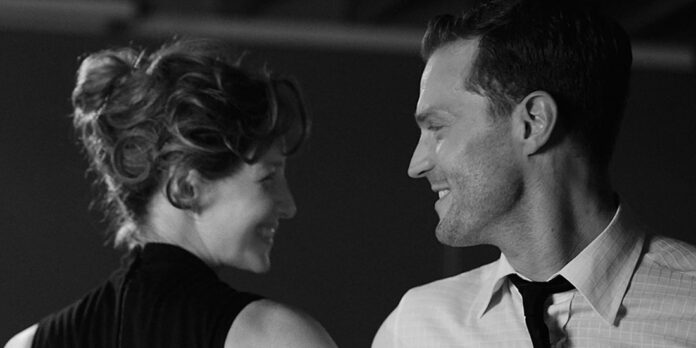 THE STORY – A semi-autobiographical film that chronicles the life of a working-class family and their young son’s childhood during the tumult of the late 1960s in the Northern Ireland capital.

​​​​​​​​​​Sometimes, all it takes is one scene. There is one scene in Kenneth Branagh’s lovely memory of a film, “Belfast,” that is so perfect a cinematic expression of joy and togetherness that I was moved to laughter and tears simultaneously. It comes very near the end, as our central characters celebrate life and love and community together after it seemed as though their whole world was going to fall apart, doomed to stay stuck in trouble for a very long time, if not the rest of their lives. But for one night, all of that is set aside for singing and dancing, hugging and kissing. It’s the scene where the film’s message becomes crystal clear, where everything that had previously seemed like a failing on the film’s part was revealed to be instead perfectly suitable for the story Branagh is ultimately telling. This film about an Irish family struggling during The Troubles is much more about family than it is about The Troubles and is all the more magical for it.

The family in question is a working-class clan on a friendly little street in Belfast, Ireland, in 1969. Buddy (Jude Hill) is a playful, carefree nine-year-old boy who lives with his big brother Will (Lewis McAskie), strong-willed Ma (Caitriona Balfe), and loving but mostly absent Pa (Jamie Dornan), who is only home every other weekend from working construction in England. Granny and Pop (Judi Dench and Ciarán Hinds) live close by as well. Buddy loves to play but is also working hard on his maths homework to move to the head of the class to sit next to his crush, Catherine (Olive Tennant). But his idyllic childhood is shattered when riots break out. Soon, a barricade is set up at the end of the street, and the military is brought in to keep violence out. The priest talks about having to choose a good or bad fork in the road. Ma and Pa’s relationship grows more strained. And all Buddy, too young to fully comprehend everything, can do is watch, living for the regular trips to the cinema when the family can be together and free from worry.

The film’s screenplay keeps everything as simple as possible to stay within Buddy’s perspective. Sometimes, though, Branagh errs on the side of too simple – I only vaguely knew what The Troubles were before seeing this film, and I don’t know that I could tell you any more about who was doing what to whom and why after seeing it. But the simplistic nature of the story and dialogue does have one huge upside: It brings us closer to the central family unit until we become a part of it. The clear-eyed, emotionally direct performances help, too, eliciting just the right amount of sympathy at just the right points. Balfe and Dornan are the standouts in parts that require them to hide certain feelings from other characters but not from the audience. Dornan finds a way to make Pa come across as firm but not stoic, very much in touch with his family’s emotions as well as his own. It is by far the actor’s best performance, masculine in ways we rarely get to see onscreen. Balfe can change the course of a scene through just her eyes, moving from steely resolve to regretful heartbreak in one heartbreaking glance. Hill is quite a find; his wide-open face is incredibly easy to fall in love with and feel protective towards. When his joy melts into fear and then into melancholy, it feels just as visceral as the filmmaking.

Branagh is still at his best as a director, working with actors and staging shots to illuminate character dynamics. But he has chosen his collaborators wisely, utilizing Haris Zambarloukos’s cinematography and Úna Ní Dhonghaíle’s editing in combination with solid sound work to emphasize the stark difference between the Belfast that Buddy’s family loves and the turmoil that will change the city into something else. The opening sequence is a perfect example of this, as a long tracking shot introduces us to the joyous hustle and bustle of the street before sweeping around and cutting to the chaotic commotion that erupts as the first riot begins. All the rioting scenes feel as volatile as the familial scenes feel intimate, creating a complete picture of what life was like in this place at this time. There are some scenes in which the black & white cinematography does not look as clear as it could, or when a dramatic angle will come out of nowhere, but they do not mar the film’s ultimate emotional impact. Even when the film doesn’t look as good as it could, Branagh’s deep connection to the place and people of Belfast comes through beautifully. When the film reaches its gorgeous conclusion, not long after that magical scene of communal celebration in the face of tragedy, it’s hard not to feel as connected to Belfast and the people we’ve met there as he does. That is pure movie magic, magic that we need now more than ever when the world feels so isolated and disconnected. After the past year and a half, watching “Belfast” in a cinema is a healing experience, one that brings us all closer together in a way that only cinema can. You won’t want the film to end, but once it does, you will walk out with more love in your heart than you had walking in.