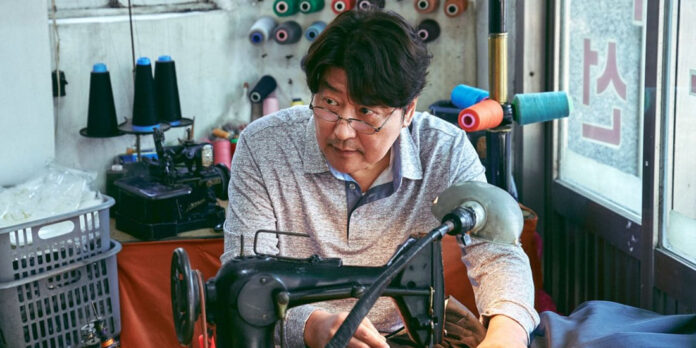 THE STORY – One rainy night, a baby is left at the baby box facility. Sang-hyun and Dong-soo secretly take it home. However, So-young unexpectedly returns the next day, looking for her baby Woo-sung. She decides to call the police when she finds out that her boy is missing. The two men’s explanation that they took him to find suitable parents willing to adopt him is hard to believe, but with nowhere left to go, she decides to join their mission to find new parents for her boy. Meanwhile, the police detective Su-jin and her subordinate Detective Lee have been investigating the case for the past six months, waiting for the decisive moment when they can catch the duo in the act. This group of people, brought together by a baby box, set off on a journey that will lead to destinations they never expected.
​
THE CAST – Song Kang-ho, Gang Dong-won, Bae Doona, Lee Ji-eun & Lee Joo-young

Revered Japanese auteur Hirokazu Kore-eda has been on a sort of international tour since he won the Palme d’Or for “Shoplifters” during the 2018 edition of the Cannes Film Festival. Before then, he’d remained tied to his native Japan, beginning with his 1995 directorial debut, “Maborosi.” But after the golden laurels, he set his sights on making his English-language debut a year later with “The Truth,” starring Catherine Deneuve, Juliette Binoche, and Ethan Hawke. Also uncharacteristic was the film’s debut at the Venice International Film Festival, away from the Cannes Film Festival, where four of his last five films premiered. While it wouldn’t be considered a failure, the film was seen as a lesser work from a dependable master. So, as a possible rebound tactic, Kore-eda has returned to familiar territory with “Broker,” debuting in competition at this year’s Cannes Film Festival. But Kore-eda hasn’t fully returned to his roots as he stops just short of Japan by setting and supplying his film with top-tier talent from South Korea. With the help of his crew, many of which come from “Parasite,” including lead actor Song Kang-ho, cinematographer Hong Kyung-pyo, and composer Jung Jae-il, Kore-eda has crafted a touching, if familiar, story about families forming in the most unlikely of circumstances.

A baby has been left in a deposit box used by mothers who can’t, or won’t, keep their babies. Two of the employees at the facility, Sang-hyun (Song Kang-ho) and Dong-soo (Gang Dong-won), have formed a partnership to circumvent the establishment’s rules by taking the babies into their protection and selling them under the table to needy couples. The act itself isn’t just about the money, even though it does help since the going rate for a child is nearly $10,000. The pair see themselves as saviors for these kids, as selling them off gets them to a proper home much quicker than the laborious state-run system. One in forty mothers who drop off their babies never return, but So-young (Lee Ji-eun) is that one. She comes back to discover that her baby has been snatched by the pair, whom she labels as simple “brokers” looking to make a few extra dollars under people’s noses. Needing to keep her quiet and lend some legitimacy to the sale (which So-young is still okay with), the brokers decide to cut her in on the deal.

Purely based on this introductory premise, Kore-eda has laid the foundation for a film filled with moral quandaries. Is it right to break the law and sell a child if it means they will potentially have a better life? Who is worse, the mother who disposes of the baby or the people who sell the child? Who’s responsible for the child once the mother has disowned them? Kore-eda doesn’t stop there, as the plot thickens those arguments with supporting details and rationalizations from each character’s perspective. So-young is revealed to have a troubled past, lending some credibility to the usual selfish act of giving up your child. Sang-hyun has had run-ins with the law, and Dong-soo grew up in a run-down orphanage where the chances of being adopted are slim to none. But even with all of these interesting character developments that should create an ethically questionable story, Kore-eda’s direction never makes you feel as if any of this is wrong or dangerous outside of the gang being tailed by two female police officers looking to catch them in the act. However, the danger of getting caught never comes to the surface, with the cops being more of a humorous nuisance than a threat. Kore-eda is more interested in the human drama coming from each character, how they intersect, and what decisions they ultimately make rather than inserting any kind of thriller-like elements to entice the story to a more mainstream audience. The result is another solid, if not outstanding, effort from the Japanese filmmaker, backed by a flawless ensemble led by the subtly nuanced and exceptional Song King-ho.

Similar to his previous Cannes entry, “Shoplifters,” Kore-eda does make plenty of time to instill life lessons on how we don’t often get to choose the family we have. A direct reference to Paul Thomas Anderson’s mosaic “Magnolia” tells the audience how the best-laid plans never truly turn out the way we envision (also similarly echoing Song Kang-ho’s Sang-hyeon in “Parasite” when he tells his son, “With no plan, nothing can go wrong”). Even though each character may have their own agenda behind the act, their shared journey is what binds them together. Dong-soo and So-young’s beautifully symbolic trip atop a Ferris wheel, coupled with the ivory keys of Jung Jae-il’s score, makes for a tear-inducing moment that will remind viewers of what a master Kore-eda is of the cinematic medium, no matter the language or country his story is taking place in. With a lighter tone and more melodrama, “Broker” doesn’t contain the precision of Kore-eda’s previous works, but that lightness still makes for an accessible and emotionally rewarding experience nonetheless.