“BARDO, FALSE CHRONICLE OF A HANDFUL OF TRUTHS” 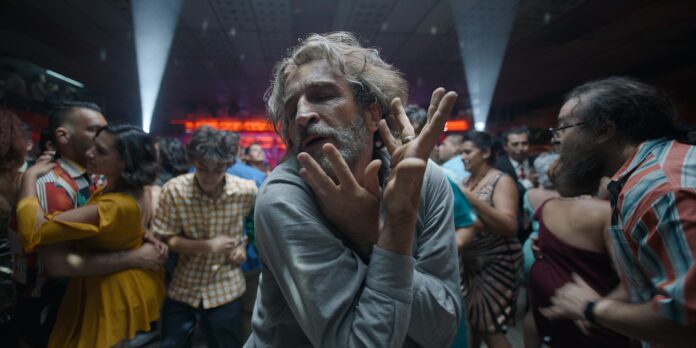 THE STORY – A renowned Mexican journalist and documentary filmmaker returns home and works through an existential crisis as he grapples with his identity, familial relationships and the folly of his memories.

It may just be me, but I suspect there’s a great 105-minute movie buried somewhere deep within Alejandro González Iñárritu’s latest, the 174-minute behemoth “Bardo, False Chronicle of a Handful of Truths.” The film, the Mexican filmmaker’s first since he won his second Academy Award for directing 2015’s “The Revenant,” has been the subject of much industry speculation over the years, with many surmising that it would be a personal film a la his pal Alfonso Cuarón’s “Roma,” a portrait of the artist as a young boy. Instead, what Iñárritu has produced is much more akin to such spectacles as Fellini’s “8 1/2” or Bob Fosse’s “All The Jazz,” a portrait of the artist as a tortured soul.

The premise behind “Bardo” is actually a pretty solid one — Silverio (Daniel Giménez Cacho, blameless), a Los Angeles-based TV journalist turned successful documentary filmmaker, decides to return with his family to visit his home country of Mexico and, along the way, ruminate on his life. He’s hailed by his friends there as a returning hero, the local boy who made good, but deep inside; he wonders whether he’s really seen as truly Mexican or a mere corporate sellout.

Doubts form in Silverio’s mind. As a filmmaker, did he exploit the subjects of his documentaries, particularly poor migrants, for his own personal gain? By embracing his celebrity status, is he being used as a tool by the rich and powerful whom he had once vowed to expose? Finally, why does he spend years working on a film only to reject the acclaim that comes with its success? Is he being humble? Or is he merely humble-bragging? Though these questions are prominently raised in “Bardo,” most are summarily dropped without any deeper exploration.

It’s only the last issue — Silverio’s humility or lack thereof — that seems to engage Iñárritu and becomes the one with which he is willing to grapple. Had he chosen to turn inward and make a small, focused film that honestly examined his own failings as a man and an artist, “Bardo” really could have been something special.

Instead, he goes big, smothering that core of a great idea with a parade of fantasy tableaux, designed ostensibly to reveal the emptiness of Silverio’s existence but instead serving mostly to trumpet own Iñárritu’s flamboyance as a filmmaker. Sure, the director fancies himself as a showman of sorts with his penchant for long flashy takes and his boasts about his grueling production conditions. But one man’s showman is another man’s showoff, of which “Bardo,” unfortunately, is Exhibit A.

Sadly, largely sacrificed at the altar of the director’s ego are the talents of his predominantly Mexican cast. Cacho’s Silverio is essentially a passive character, often observing as others trigger the action around him. However, with his rumpled Spielberg-like demeanor, he makes for such an appealing presence that we’re willing to tag along. Ximena Lamadrid as Silverio’s perceptive wife and Íker Sánchez Solano as his outspoken Americanized son each manage to score in their scenes with Cacho, and Francisco Rubio as Silverio’s former on-air partner whom he abandoned to go on to greater glory has a spectacular rooftop confrontation scene with his former partner that is among the film’s more effective moments.

Long after “Bardo” has been forgotten, though, the film’s cinematography by Darius Khondji will likely live on, at least in my mind. The cascade of jaw-dropping imagery that Khondji has created offers one surprise after another during the entirety of the film and is matched only by how he has put it all together. The color, the lighting, the image composition…time after time, it’s simply *chef’s kiss*. Khondji’s artistry also extends to the film’s extended sequences, two of which are particular standouts: a tracking shot set in a TV studio that offers a hilarious satire at the excesses of local television and a track that prowls through the inside of a jumping nightclub party that is evocative of (what else?) “Goodfellas.” And there’s no higher praise than that.

It’s just a shame that all this good work isn’t being used for the cause of a better film. And I’m a big fan of Iñárritu’s work, particularly “Amores Perros” and “Birdman” (which I will defend to this day). Still, though “Bardo” is a big swing and a miss, there’s no question that a filmmaker as talented as Iñárritu will work again. But on his next film, I just hope that he can partner with a stronger producer — someone who can say “no” to the artist and this time make it stick. He’ll be a better filmmaker for that.

<b>THE GOOD - </b>Striking imagery by cinematographer Darius Khondji and a strong cast are the highlights of Alejandro González Iñárritu's darkly comedic look at the travails of a troubled film director.<br><br> <b>THE BAD - </b>The bloated 174-minute runtime of this pretentious exercise in self-admiration smothers what could have been a gem of a small, self-reflective look at filmmaking.<br><br> <b>THE OSCAR PROSPECTS - </b><a href="/oscar-predictions-best-international-feature/">Best International Feature</a> & <a href="/oscar-predictions-best-cinematography/">Best Cinematography</a><br><br> <b>THE FINAL SCORE - </b>6/10<br><br>"BARDO, FALSE CHRONICLE OF A HANDFUL OF TRUTHS"