“THE HAND OF GOD” 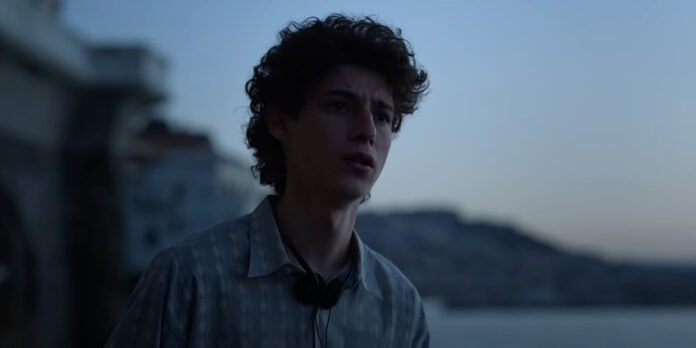 THE STORY – The story of a young man’s heartbreak and liberation in Naples, Italy. It’s the 1980s and 17-year old Fabietto Schisa might be an awkward Italian teen struggling to find his place, but he finds joy in an amazing family who love life, relish mischief and take deep pleasure in meddling in one another’s complicated relationships. Then comes a pair of events that alter everything. One is the triumphant arrival in Naples of a god-like athletic legend: high-flying soccer idol Maradona, who has Fabietto, and the whole scrappy city, feeling a pride that once seemed impossible. The other is an inconceivable accident that will drop the bottom out of Fabietto’s world—setting his future in motion. Seemingly saved by Maradona, touched by chance or the hand of God, Fabietto wrestles with the nature of fate, the confusion of loss, and the intoxicating freedom of being alive. In his most movingly personal film, Sorrentino takes audiences on a sensory journey bursting with the contrasts of tragedy and comedy, love and desire, absurdity and beauty, as Fabietto finds the only way out of total catastrophe through his own imagination.

​​​​​​Sometimes a film takes a while to find its purpose. There’s nothing wrong with trusting in an audience’s patience, but “The Hand of God” tested mine. Split nearly evenly into two distinct parts; it spends half of its runtime hiding its true intentions and the other half literally screaming its messages and ideas. Sure, it’s a visually beautiful journey through a nostalgic world, but the tonal and narrative shifts prove to be inorganic and forced.

In this memory piece, we follow Fabietto (Filippo Scotti), along with his father Saverio (Toni Servillo), mother Maria (Teresa Saponangelo), and older brother Marchino (Marlon Joubert). The film shows us assorted vignettes of them and their extended relatives living, fighting, and laughing. When a seismic event reshapes their shared existence, they find themselves forced to reckon with unplanned and unexpected emotions.

Sorrentino, more than most directors, structures his movies around striking and impactful images. Whether or not they are relevant to the plot or themes is irrelevant. The aesthetic comes first, and purpose comes second. “The Hand of God” continues this directorial trend. Fortunately, here his memorable shots are more narratively relevant than usual. This is most evident in an evocative opening sequence. We are treated to several breathtaking images, including a crashed chandelier that slowly lights up to illuminate a mysterious home. The metaphorical connection of these images to the characters is later made clear in a way that proves highly satisfying.

Once the film’s overall purpose is revealed, it can’t stop hammering home its messages in increasingly louder and more obvious ways. It eventually reaches the point where one of the main characters’ inspirations literally screams life lessons at him and, consequently, the audience. It’s all a bit too much. It’s pretty obvious that Sorrentino is pouring his own world views and experiences into the film, which has the benefit of making it extremely personal. Still, sometimes it’s, unfortunately, a bit alienating. Still, the specificity with which he shows moments in his characters’ lives (a mother juggling oranges, a prank involving a bear suit, etc.) only makes the whole film more relatable. It’s similar to the way that we can often recall memories the less generic their details are. Their uniqueness makes them easier to remember because they make an impression. Sorrentino knows this and peppers the film with distinctive features.

In his past works, it’s been evident that Sorrentino is inspired by, indebted to, and profoundly admires Federico Fellini. That reverence is further made clear in “The Hand of God.” The patchwork narrative structure of the film’s first half suggests Fellini’s “Amarcord.” And at one point, Fellini is even a character in the film (at least, off-screen). I suppose it’s a relief that Sorrentino isn’t hiding his love of Fellini. It’s only fair, given how much he borrows from the great director.

While I was overall unimpressed with the structure and form of the screenplay, the acting ensemble is uniformly excellent. Scotti makes a compelling lead. He’s both sympathetic and charmingly immature, but the true standouts are the two performers playing his parents. Servillo brings assured energy to the father, making him realistically affectionate and loving, with flaws hidden not-too-deep below the surface. And Saponangelo is fantastic as the mother. She brings a playful energy to the prank-loving character that never strays into being annoying or obnoxious. This joie de vivre only makes the moments where she lets devastating emotion peak through her exuberant exterior even more heartbreaking. The film would completely fall apart if these two parental figures weren’t portrayed as well as they are, as so much of “The Hand of God” is reliant on the audience appreciating their presence whether they’re onscreen or not.

“The Hand of God” works best when it explores the extremities of human emotion and how we cope with them. It’s too bad that the film’s two modes involve either formless meandering or heavy-handed, overly-apparent dialogue. The one commonality between these two distinct methods is that it’s all unquestionably gorgeous to look at.