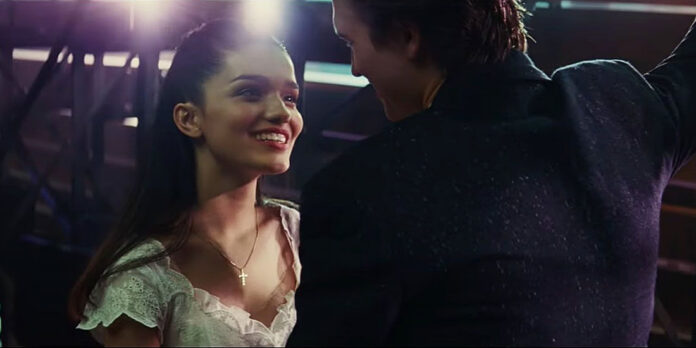 ​​​​​​​​​One of the reasons that revivals are so popular on Broadway is the ephemerality of the theater. Once a production closes, it’s gone for good. Unless (and sometimes, even if) the show has been preserved on film, there’s no way to experience it again. That particular vision of the show is gone, so in a decade or so, a show can be mounted again in a new production, as either a faithful restaging of the original or a reimagining that presents the material under a different light. The same is not true of movies. Once made, movies are available to be viewed by people repeatedly (most of the time; some older films have been lost). Because the original versions of films are still around for reference, it’s rare to see someone attempt to remake a widely-acknowledged classic. In the few cases where they do (Gus Van Sant’s “Psycho,” Timur Bekmambetov’s “Ben-Hur”), critics are often merciless. You can’t top perfection, so why would you even try? Steven Spielberg is one of the very few living directors who could survive such an act of folly even if it did go wrong. Still, for the director’s latest remake, he’s also chosen a film in a genre he hasn’t touched so far in his storied career: the groundbreaking, Oscar-winning musical “West Side Story.”

Robert Wise and Jerome Robbins’ 1961 film has stood the test of time, in no small part because it’s pretty much perfect; with iconic images that match Robbins’ iconic choreography and Leonard Bernstein and Stephen Sondheim’s iconic songs with technical precision, charismatic performances, and above all else, a seamless blend of artifice and reality. That last bit is especially important for a musical about street gangs; asking audiences to buy into characters “randomly” breaking out into song and dance is one thing; asking them to buy into macho gang members fighting through dance is quite another. It’s this bit that is also the most difficult thing for a “West Side Story” remake to get right in 2021 when we like even our comic book movies to have a sense of realism to them. Somewhat unsurprisingly, it’s this bit that trips up Spielberg the most in his attempt to make a new version of the classic musical, which takes “Romeo & Juliet” and transposes it to late 1950s New York City, replacing the Capulets and Montagues with rival street gangs: the white Jets and the Latinx Sharks.

Spielberg at least makes his aims very clear right from the first shot of the film: a pile of rubble that was once a building but is revealed to be the future site of Lincoln Center. Tying the story to a specific place at a particular point in history – something the original film did not do – announces to the audience that this version of “West Side Story” has a lot more on its mind than a tale of star-crossed lovers and cultural tolerance. The brilliant dramatist Tony Kushner has written an almost entirely new script for Speilberg’s film, and what a job he has done. No disrespect to original writers Ernest Lehman and Arthur Laurents, two of mid-century America’s greatest writers, but Kushner’s screenplay is a marvel, adding not just socio-political context but character backstory as well. We now understand every character on a deeper level; Maria (Rachel Zegler) may be infantilized by all around her, but she took care of her ailing father in Puerto Rico all by herself; her big brother Bernardo (David Alvarez) makes money as a boxer; Tony (Ansel Elgort) is on parole after serving time for almost killing a rival gang member with his bare hands, and he started the Jets with his best friend Riff (Mike Faist) in part so that both of them could escape their home lives.

Kushner’s book is one of two elements of this “West Side Story” that inarguably improve on its predecessor, and indeed, the film predominantly works as well as it does because of Kushner’s work. The other element to improve on the 1961 film is the casting, which sees a beautiful range of Latinx performers as the Sharks, righting the wrongs of Hollywood’s past. The film fully embraces the immigrant experience, with characters flipping between English and Spanish sometimes in the middle of sentences, with nary a subtitle in sight. This may be a point of contention for many audience members, but even if you don’t understand Spanish, the performers convey the gist of what they’re saying with their inflection and body language.

And what performers! Elgort manages to overcome his resting doucheface just enough to make it believable that Maria would fall for him so quickly, and Zegler is radiant in her screen debut. They have more chemistry as a couple than Richard Beymer and Natalie Wood did in 1961, and although her voice is more robust than his, they still sound great together. Faist has a wiry, puck-ish charisma that’s exciting to watch, even as his Riff can come across as more whiny than tough at times. Alvarez brings deep feeling to Bernardo’s bravado, and Josh Andrés Rivera makes the most out of Chino’s new arc. But the standouts of the cast, by a good margin, are the Anitas. Original Anita, Rita Moreno, brings the authenticity that only she can to the part of Valentina, who owns the corner store where Tony works. Her plaintive rendition of “Somewhere” recalibrates the song into something more intimate at the exact moment that the film needs it. As this film’s Anita, Ariana DeBose takes the meatier moments Kushner has given her and runs with them. Her megawatt screen presence ensures that you can never take your eyes off of her, but she also displays a remarkable ability to shift between different emotions – the way her rage and disappointment bleed into love in “A Boy Like That” is sensational. She does her predecessor/co-star proud, turning in work just as worthy of an Oscar as Moreno did in her Oscar-winning portrayal of Anita in 1961, despite the fact that Spielberg undercuts her big number, the should-be-showstopper “America,” at seemingly every turn.

And here we get to the crux of it: Spielberg isn’t that great with the big dance numbers. Choreographer Justin Peck has ably created some dynamic dancing that pays tribute to Robbins while also standing on its own, but it often appears as though it was created in a vacuum, instead of being a collaboration with cinematographer Janusz Kaminski. While the camera usually follows the dancing very well, the angles and movement never maximize the cinematic potential of the dancers’ movement, presenting it instead of engaging with it. When combined with Spielberg’s propensity to cut away from the dancing to focus on the faces of not only the dancers but the people watching and cheering them on, it robs the dancing of the energy it needs to match the build of the music, leaving the audience hanging. Smaller numbers like “Cool” (which takes place on a pier littered with holes) and “Gee, Officer Krupke” work much better, with the camera dynamically capturing the energy of the small groups of performers, but “America” and “The Dance at The Gym” feel shot and cut like any regular dialogue scene, failing at the most basic elements of musical filmmaking style.

Spielberg’s unease with the musical genre can also be felt in the film’s tenuous relationship with the artifice of musicals. The gritty style of the opening shots (and of production designer Adam Stockhausen’s evocative sets) makes the dancing of the film’s prologue feel more ridiculous than in 1961, which had an element of fantasy given the color-coded, larger-than-life mise-en-scene. When the dancing breaks out into actual fighting, the realistic style helps raise the stakes – the gangs feel viscerally dangerous in a way they never did in 1961 – but Spielberg never finds a way of melding that realism together with the artifice required of a musical that works. Kaminski’s cinematography doesn’t help, with a lot of diffuse light creating distracting lens flares (something that only works during “One Hand, One Heart,” with a heavy assist from the location shooting in upper Manhattan). Kaminski can still create memorable images – a puddle of water has never looked so good – but the digital sheen and color grading here feels off; crisp but desaturated in a way that emphasizes the film’s uneasy marriage of artifice and reality.

Despite this, Spielberg’s “West Side Story” still works. Kushner’s screenplay recontextualizes a few of the songs in ways that make them work better than in both the 1961 film and the stage musical, almost single-handedly saving “I Feel Pretty” by adding a layer of satire on top. He also gives us a deeper relationship with the characters by spelling out their backstories and fleshing out the world around them, making the tragedy of the second act more emotionally impactful. The performers respond in kind, turning in performances that aim straight for the heart. Thanks to the screenplay and the way it is performed, this “West Side Story” feels more complex and well-rounded than previous iterations, which allows it to speak to the current moment without ever beating the audience over the head with it. That’s quite a feat, one that marks the film as a prime example of how to go about remaking a classic. It’s a shame that the filmmaking itself never reaches the ecstatic heights of the original.